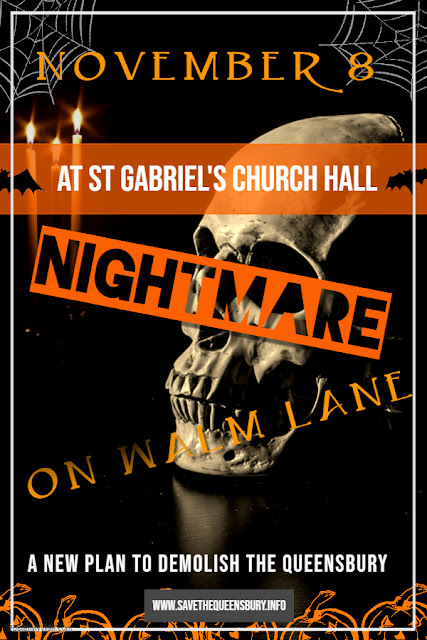 Campaigners fighting to save the Queensbury pub in Willesden Green from the bulldozers are urging supporters to attend a consultation on the developer's plans at St Gabriels Church on Chichelle Road (off Walm Lane) on November 8th. 4pm-8pm.  At the same time the developers, Redbourne (Queensbury) Ltd have given notice of an appeal against Brent Council's refusal of planning permission and asked for an inquiry LINK.


It’s been quiet since May, then shock and horror for Halloween week.


In a leaflet drop over the weekend the owner / developer of 110 Walm Lane gave notice of a public consultation at St Gabriel’s Church Hall next Thursday 8th November. This is an exhibition of a “new plan” and an opportunity to “have your questions answered” yet the leaflet bizarrely fails to mention the pub nor include any further detail on what is planned. Likewise the dedicated website (www.walmlane.co.uk) provides just a date and map, so we have no clue how much of nightmare the New Plan will be.

Save The Queensbury is easily confused. At the same time the developer has applied to the government’s planning Inspectorate (cynically just days before the legal deadline) for a six day public inquiry into Brent Council’s decision to save the pub from demolition – based on the plan kicked out in May by Brent Council.

Please tell your neighbours, Councillor, friends and others about this and encourage them to pop along and give their views.

Cllrs Tariq Dhar and Lia Coll have pledged their support: 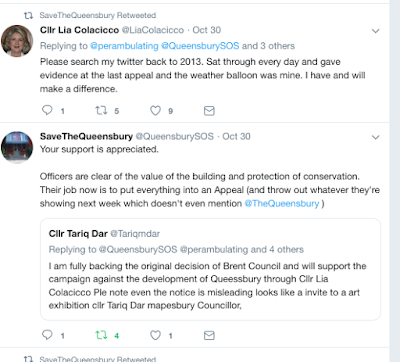 The Queensbury has always claimed it is more than just a pub - it is a community asset and this is just one of the activities that takes place there: 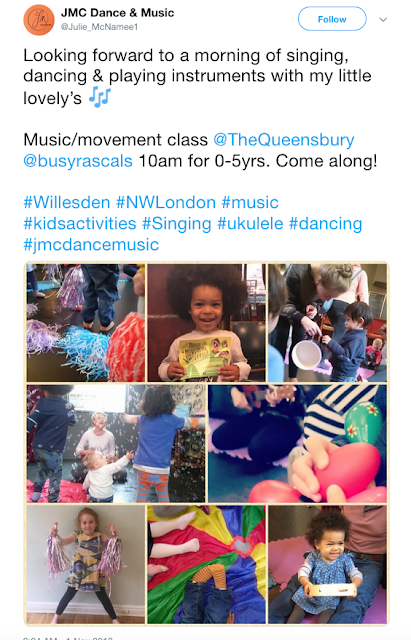 These are the grounds on which Brent Council refused planning permission:

.        1  The proposed development, by reason of its massing, poorly designed front elevation and lack of articulation, would appear unduly prominent and out of character in the street scene and in the wider locality. The development would fail to preserve or enhance the character or appearance of the Mapesbury Conservation Area in which the site is located. As a result, the proposal fails to comply with the National Planning Policy Framework 2012; Policies 3.4, 3.5 and 7.4 of the London Plan consolidated with alterations since 2011 (March 2016); Core Strategy (2010) policy CP17, Development Management Policies (2016) DMP1 and DMP7; Supplementary Planning Guidance 17 “Design Guide for New Development”, October 2001; and the Mapesbury Conservation Area Design Guide.


.        2  The proposed development would not provide an adequate overall standard of accommodation for future occupiers, by virtue of the lack of amenity space for all units, the undersized nature of units AF3, AF5, AF8, AF11 and AF15, the poor outlook of units 2.06, 3.06 and 4.05 and the poor layouts, narrow widths and usability of the units which would be contrary to Development Management Policy (2016) DMP1 and DMP19, Policy 3.5 of the London Plan consolidated with alterations since 2011 (March 2016) and the Technical Housing Standards – Nationally Described Space Standards (2015).


.        3  The proposal would fail to provide the maximum reasonable amount of affordable housing which would be contrary to Core Strategy (2010) policy CP2 and Development Management Policy (2016) DMP15, policy 3.12 of the London Plan consolidated with alterations since 2011 (March 2016) and policies H5 and H6 of the draft London Plan.


.        4  In the absence of a legal agreement to control the matter the proposal would result in additional carbon dioxide emissions within the borough in an Air Quality Management Area, without any contribution to carbon reduction measures in the area. The proposal would also fail to demonstrate that a BREEAM rating of at least ‘Very Good’ could be achieved. As a result the proposal would be contrary to London Plan consolidated with alterations since 2011 (March 2016) policy 5.2, 5.3 and 7.14, Core Strategy (2010) policy CP19, Development Management Policy (2016) DMP1 and the Mayors Sustainable Design and Construction SPG (2014).


.        5  In the absence of a legal agreement to control the matter, the development would result in additional pressure on servicing, parking demand and transport infrastructure to the detriment of the free and safe flow of traffic and pedestrians which would be contrary to Development Management Policies (2016) DMP1 and DMP12.
HERE