There are many good reasons to visit Brent’s parks and open spaces, and last Sunday another reason was added to the list of why you should visit the excellent Barham Park. A group of family, friends, Labour Party supporters and (my own category) local historians gathered in the park for the unveiling of a memorial seat to Len and Joan Snow. They had been married for seventy years when Len died in November 2013, and both had lived ninety active years, more than sixty of them as Wembley residents.
They had been stalwarts of the Labour Party since the Attlee years of the 1940’s, and Len was a local councillor for more than 25 years up to 1990, and Mayor of Brent in 1976/77. It was not surprising, then, that the main speaker at the short ceremony was Paul (now Lord) Boateng, the former MP for Brent South, whose strongest memories of them were for the kindness and love they shared with everyone they met, rather than their political work. 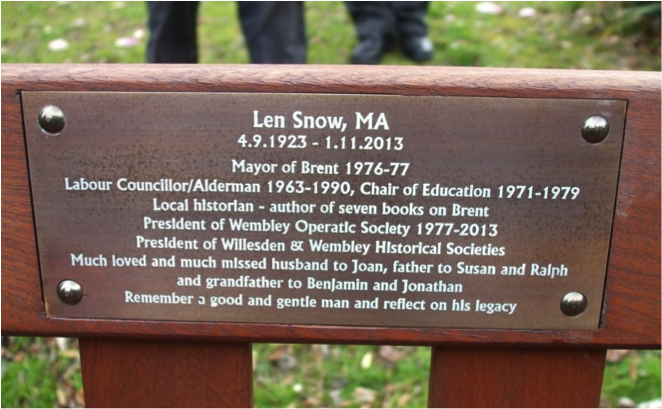 I had known Len and Joan only since 2007, and the conversations we shared were mainly about local history, not politics. One of my best memories of Len was from a talk he gave to Wembley History Society about Japan. As a 22 year-old British officer, he had been in charge of a district in southern Japan as part of the allied army of occupation after the Second World War. Despite the cruelty displayed by the Japanese army in South-East Asia up to 1945, Len soon developed a love and respect for the ordinary people of that country and their culture. A visit to Hiroshima, just months after an atomic bomb had been dropped on the city, left him committed to nuclear disarmament for the rest of his life.
It is fitting that Len and Joan’s memorial seat is in a peaceful and beautiful setting. I would encourage you to visit it. You can find it by entering the park beside the former Barham Park Library, going straight ahead into the walled garden area, through the gateway at the far side between the two lion head fountains from the 1924 British Empire Exhibition (now sadly damaged), then up the path to the right and turn left along a path to the top of a small hill.
A plaque on the seat asks visitors to remember Len’s legacy, a life of service to his community, carried out with kindness, fairness and humanity – that is something that all politicians, both local and national, and not only within the Labour Party, should reflect on, and an example that they would do well to follow.
Philip Grant.
Posted by Martin Francis at 16:24:00

Len was a well-respected chair of governors at Copland School for many years and one who never felt the need to prove his passion for education by loudly,publicly and frequently proclaiming it. It was heartbreaking to witness the way he was treated by the crooks who ran the school in the time leading up to the sackings and ‘resignations’ of Davies, Evans and Patel when they thought he was a potential obstruction to their plans. We need more like Len Snow.

It says a great deal for our 'honours' system that Davies got a knighthood (taken away after conviction) and Evans got an OBE (possibly still on his mantelpiece). Len Snow, as far as I know, got none of these baubles. I like to think he'd have told them where they could stick 'em if they'd been offered but I doubt if they were and, given the man's record, that's a shame.

Sadly Barham Parks garden charm is being lost with poor regular maintenance of the gardens. The lovely wisteria that graced the 2 main pillars in the courtyard has been removed. Not sure why it had to be removed ? Any ideas as it is not the same without the wisteria

A tribute well written by Phillip Grant, to a dedicated couple who genuinely cared about about local history as well as development in the community of Brent.. I remember Len when he was mayor of Brent in 1976-77. He and his dear wife adopted a poor community centre, named Moonshine Community Arts Workshop which was situated in Kensal Green, as his Mayoral charity and successfully raised over £40,000 for its refurbishment. In doing so, he and his wife humbly attended many fundraising functions and regularly mingled with the local community, respectfully making each and everyone they spoke to feel like a valuable human being, despite Joan striving to overcome health her own problems at that time. I would therefore like to thank all those who organised the memorial and join those who say, our community certainly needs more couples' like the selfless Len and Joan Snow.

One of the Brent councllors who is a Barham Park Trustee told me the wisteria was removed because it "was felt to be impeding access" - I have asked them to confirm who took this decision and to confirm what they mean by access - "of whom to where"?

That wisteria was there not just for years but for generations!!!

Apparently only Brent councillors can be members of the Barham Park Trust, not local people, so perhaps this is why the park is being destroyed bit by bit! Flower beds gone, trees gone, wisteria gone, beautiful iron gates gone and replaced by cheap modern alternatives, library gone, buildings rented out to Acava rather than for community use, etc

My Name is Andrew Case i came to Brent in 1984 from Leicester as the new Director of Moonshine Community Arts Workshop, Len was the Chair of the committee , that appointed me , but Len was also responsible for helping myself and my family to move to Brent , himself and Joan became really good friends , they really were a very kind loving a and gentle couple.
Thank you
Andrew Case and Family