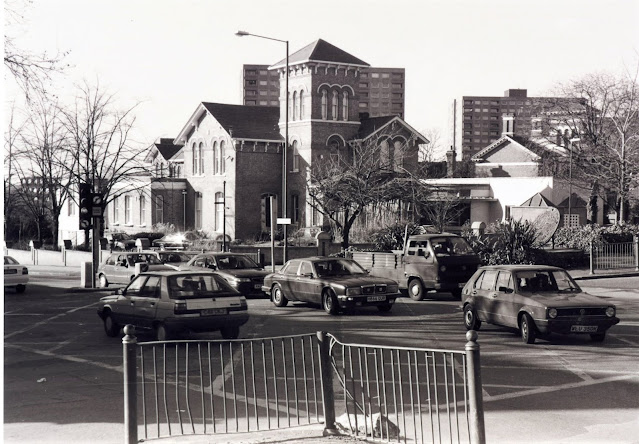 BACES City Challenge Adult Education College, with the HCC Community Garden and its sculpture in front, mid-1990s (from the material that Melvyn Leach donated to Brent Archives).

Philip Grant left this comment on a previous post LINK but I thought it was worth publishing in its own right:

I have now seen some of the information that was donated to Brent Archives about the acquisition and refurbishment of 1 Morland Gardens in the 1990s. Here are a few of the highlights from it:1. Job skills and education training were one of the main themes of the Harlesden's bid for funds from the Government's City Challenge regeneration scheme.2. BACES already had a strong reputation for its imaginative and innovative approach to adult education, which had received national and international attention.3. Chassay Architects were first approached by BACES in the Spring of 1993, to find a suitable site for a new adult education college in the Harlesden City Challenge bid area.4. It was Chassay Architects who recommended 1 Morland Gardens, which 'had been vacant for several years, but neglected for many more. Whilst the original Italianate villa was well built with good quality materials, many of the additions were not.'5. The villa was on a prominent corner site, with good transport links, and a local landmark building which the Council had Locally Listed because of its importance to the character of the area:- 'The area has a disjointed feel, with the Italianate villa and its leafy surroundings as a symbol of former times to all travelling west on Hillside.'6.'After much searching, the site at 1 Morland Gardens was found to be the only one suitable, and although not for sale, succesfully purchased. The brief developed from the Client's [BACES] requirements and their vision of the area's needs with the support and encouragement of LB Brent and Harlesden City Challenge.'7.'With newly relandscaped surroundings, the whole will not only be an outstanding centre, but could become a symbol of a potential future for the area.' 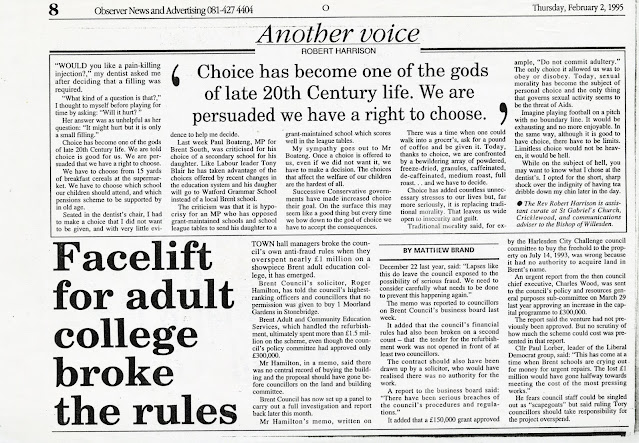 8. However, a local newspaper article in February 1995 revealed that a report from the Council's solicitor had found: 'There have been serious breaches of the council's procedures and regulations' over the project. In July 1993, the Council's Harlesden City Challenge committee had approved a grant of £150k to buy the freehold of the property, when they had no authority to acquire land in Brent Council's name.In March 1994, the then Chief Executive had sent a report to a Policy and Resources committee seeking an increase in the capital budget for the project to £300k, but pointing out that there had been no previous approval for any spending on it!
Posted by Martin Francis at 18:24:00

City Challenge probably bought 'pocket park' land for the council elsewhere, perhaps at Acton Lane/Mordaunt Road and at Acton Lane/Barrett's Green Road junctions, so may been bureaucratic cockup and nothing more.

It may have been a bureaucratic cock-up that saw 1 Morland Gardens being purchased in Brent Council's name by the decision of a committee that had no authority to make that purchase - I don't know.

What I do know, from clear evidence, is that BACES, HHC and Brent Council (through the committee, and with the approval of the Director of Education / later Chief Executive) bought the Victorian villa at 1 Morland Gardens with the intention that the building would be restored and sympathetically converted (to retain its character as a locally listed heritage asset) for the benefit of the local community, as an adult education centre and base for victim support.

The problem is that Brent Council treats any land acquired at the Ratepayers' expense as its personal property. So the sell it and give it away to private developers without any thought about the community that paid for it. See the Willesden Green Library land grab saga of 2012: https://www.kilburntimes.co.uk/news/unearthed-document-gives-willesden-green-library-campaigners-fresh-hope-1-1506115