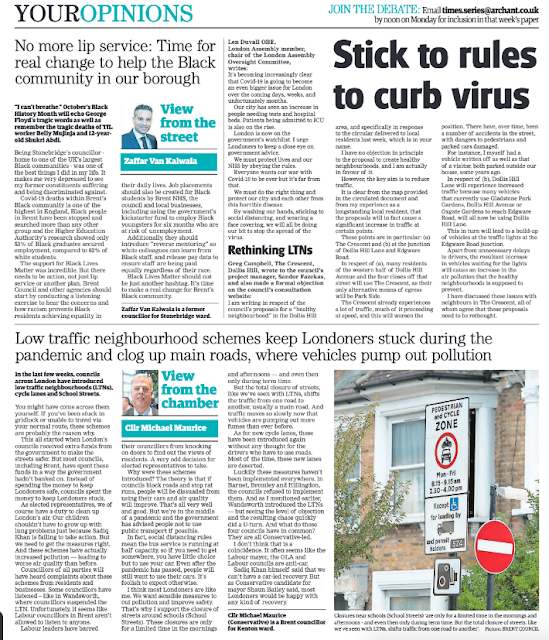 As there is a limit of three speaking slots for the public at Brent Council meetings a ballot had to be held to select three of the applicants to put their views to the Extraordinary Council Meeting on Healthy Neighbourhoods to be held on Friday 16th October at 3.30pm.

Given the short-notice of the meeting and the deadline for applications closing before the agenda was published, it is pretty amazing that any applications went in at all.

Local opinion is divided with many supporting the low traffic neighbourhood schemes as a way of reducing air pollution and reclaiming the streets from cars while others have mobilised against the scheme (see the current Kilburn Times). A petition 'Stop Road Closures in Kensal, Brondesbury and Queens Park' has mustered 2,262 signatories at the time of publication. I do not know whether the organisers have fulfilled the fairly stringent requirements that would enable the petition to be presented at the meeting.

The seven councillors who called the Extraordinary Meeting are not asking for the scheme to be dropped but calling for evidence about the rationale behind the specific schemes and information on how it will be evaluated.

They call the meeting...

To instruct the Lead Member for Regeneration, Property & Planning to provide a comprehensive rationale for the introduction of the temporary Healthy Neighbourhoods in the various areas.

This to provide details about how these areas have been chosen; how it impact targets; mitigations, if any; viability of the monitoring of the scheme; what prior public and stakeholder engagement has taken place; the equity of the trade-off between loser  residential streets and gainers; the risk of increased congestion on certain residential roads and implications on emissions; the methodology to be used to evaluate the outcome, notably the goal of lower overall traffic volumes; and the measurements in place to secure adequate baseline data for ALL streets affected (including the connector roads). 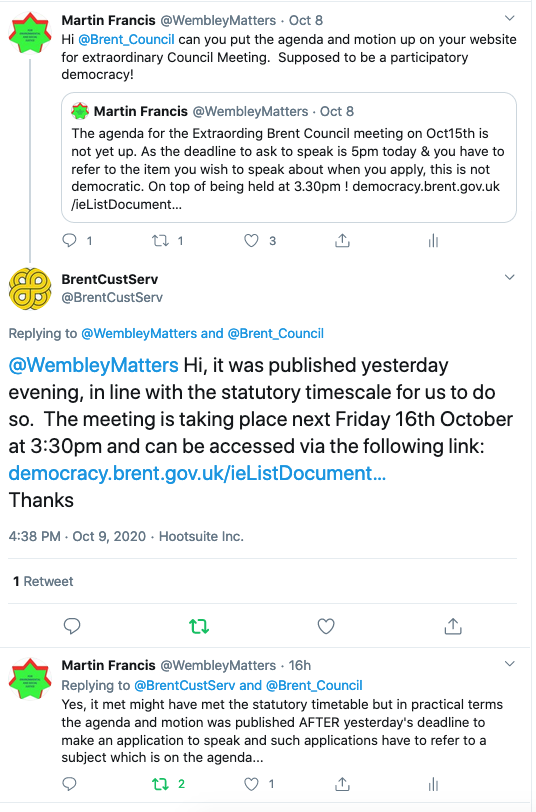 If you are not at work, shopping or collecting the kids from school (which covers an awful lot of people) you can watch the meeting live on the Council webcast HERE

Call me a cynic, but I just can't understand how a "healthy neighbourhood" can be created within a borough in which the local authority
evidently doesn't have a clue on how to achieve it's supposed objective, while residents continue practicing ''unhealthy'' habits such as smoking, that a succession of selfish, irresponsible, politicians allowed to be advertised alongside food, that has led to countless illnesses and preventable deaths, as well as turning the roads and pavements throughout the borough into what is best described as a make shift ashtray?

I say that trusting local and central government to turn our borough which is currently more ''unhealthy' 'than before, partly due to Covid19 but also thanks to decades of mismanagement on their part.
I think that this situation is comparable to Eve and the serpent situation
in which a wicked being managed to persuade another being to trust him
only to find that it didn't work out as she expected.

Our borough can be ''healthy'' if the will and knowledge and cooperation on the part of all able bodied residents exists to make it happen.

If we are to find a way to the health that politicians talk about mainly because of the threat posed by covid19,
it won't happen if you apply double standards, i.e. what's the point in firing up (if you like) the wartime spirit, to beat the virus, if at the same time you continue filling shop shelves with ''unhealthy'' things like cigarettes and vaping implements?

That is like an overweight person going to a diet group in which the leader
tells the participants to continue eating high fat food and only exert themselves when it comes to cooking.

Come on people,
it's time to take of the blinkers and see the real picture being painted by the politicians who have led us to the situation we find ourselves in.

We can get ourselves to a better, healthy, place but we have to be focused and determined otherwise it wont happen.

Further to my previous comment on the matter of health in Brent; I think that mental health in connection with social housing should be taken into account by the three local groups.
After all, social housing in Brent is an ongoing source of anxiety and frustration; the ongoing anxiety and disillusionment expressed by long suffering residents in South Kilburn bears undeniable witness to that:
along with the Harlesden woman who chose to make herself ''homeless'' in connection with low standards concerning social housing in Brent, makes it difficult to deny that mental health in Brent is a growing problem. In fact, an article about mental health on the 18th of March 2020 in the Evening Standard newspaper, said " Brent had the highest proportion (33%) of (depression) sufferers.

In addition to that; the article stated that concerning low self esteem and exercise, Brent was worst by 57%.

Just think about it; a survey of the capital’s mental wellbeing, revealed that 90% of Brent residents claimed to be ''unhealthy'' concerning, depression, low self esteem, and exercise.
When I take a walk through parts of Brent such as Wembley, Neasden, Kilburn etc, I never fail to see evidence of ''unhealthy habits'' such cigarettes stubs, class A drug paraphernalia (along with the unmistakable scent of cannabis in the air) trails of empty silver cannisters in car parks and even outside certain popular fast food restaurants.
It is also the norm for grass verge areas to be used as convenient places to dump large amounts of empty beer cans and bottles,
certain parts of Neasden and Wembley Park have serious problems with that.

Chalkhill estate, since late 2001, under the (poor) management of MTVH (Metropolitan Thames Valley Housing) is arguably one of the most unhealthy estates in the capital.

The list of complaints from residents is seemingly endless; and ironically, the aforementioned housing association uses the following slogan on its official webpage; ''We believe everyone should have a home and the chance to live well.''
I don't know about you, but I think that any home provider that makes such a claim, ought to live up to it.
I don't think that it is easy to ''live well'' if the house or flat provided by the landlord(s) lacks quality, and is poorly maintained.
In addition to that; the environment is also poorly maintained by the local authority; and it uses as standard the lack of funding as a convenient excuse.
I reckon that the current state of the environment in Brent is the reason why so many residents suffer from depression, and low self esteem.
A sedentary lifestyle invariably leads to frustration and depression.
In addition to that, pavements that are left in a state of disrepair, green areas being littered by inconsiderate people that practice unhealthy habits such as smoking, drinking, drug misuse and fast food consumption, that often lead to mental health issues, serious damage to their hearts and livers, obesity and type 2 diabetes, is a reflection of misguided and undisciplined people in Brent along with a local authority that is rapidly losing control of this sad situation.