Welcome back to this fourth article in the Kilburn local history series. If you missed Part 3, you will find it here.

Railway lines began crossing Kilburn’s land in 1837, with the coming of the London and Birmingham Railway. Kilburn (now High Road) station opened in 1851. In the 1860s Edgware Road (later Brondesbury) station came on the Hampstead Junction Railway, and Kilburn and Brondesbury (Kilburn today) station was opened on the Metropolitan Railway in 1879. 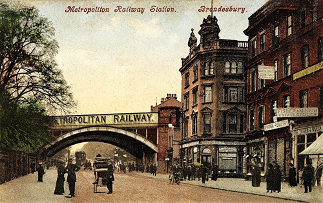 The earlier railways, however, did not stimulate a large growth in Kilburn. The main developments were still along the Edgware Road, which was served by horse buses and later trams. In 1856 22 omnibuses a day ran to London Bridge and by 1896 south Kilburn was served by over 45 buses an hour. The start of the 20th century brought a motorbus service to Oxford Circus, and in 1915 Kilburn Park station on the Electric Railway line was the first underground railway in Kilburn. 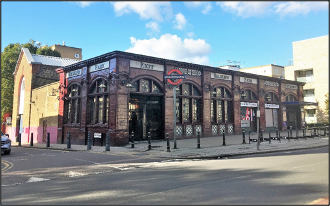 In Charles Dicken’s Dictionary of London, published in 1879, Kilburn was described as ‘a newly built district at the far end of the Edgware Road’. Its development, beyond a few large houses, had begun in the south, after Lady Salusbury sold her properties to the Church Commissioners in 1856. The following year the Commissioners made a series of agreements with James Bailey, a builder from Maida Vale, who later moved to Brondesbury Lodge.

In 1859 Bailey had built Brondesbury Terrace and started work in Canterbury Road. By 1867, he had put up about 550 houses, including Cambridge and Oxford Roads, using architectural pattern books, and marketing his development as Kilburn Park. A number of houses he built, along with the Duke of Cambridge and The Brondesbury public houses (both now converted for residential use), are now locally listed buildings within the South Kilburn Conservation Area. 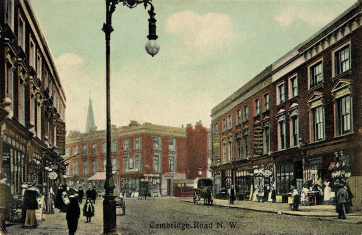 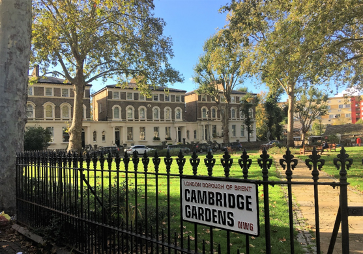 Other speculative builders followed Bailey to the area. Speculative building – when houses were built before a buyer or a tenant was found – put developers at risk if they over extended themselves, so many went bust. Through the rest of the 19th century, local house building expanded northwards. You can see the extent of development in 1875 (when Willesden Local Board was established, with a population of 18,559), and again by 1895 (when it had become Willesden Urban District, with 79,260 people) on this map. 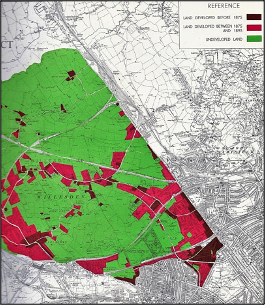 By the 1880s, businesses like the United Land Company would purchase plots of land, subdivide them into smaller plots and sell those at auctions, resulting in smaller developers doing the actual building. The names of the roads would often come from old estates in the area (Mapesbury, Brondesbury), or places connected with former landowners. The Salusbury name lives on today, in a road and the school situated on it, as well as a pub, wine store and other local amenities. In another example, the Powell Cottons owned the land on the Shoot Up Hill estate, and the names of the roads there reflected their Kent connections (Fordwych, Minster, and Westbere Roads, etc).

One famous resident of Kilburn was the artist Louis Wain (1860 – 1939), who lived at 41 Brondesbury Road. Louis Wain was famous for the drawings of anthropomorphized (with human features) cats. Born in Clerkenwell, Wain studied at the West London School of Art, where he was also assistant master. In 1882 he joined the staff of the Illustrated Sporting and Dramatic News and four years later that of the Illustrated London News.

When Wain was 20, his father died, and Louis became the main supporter of his mother and five sisters. At 23 he married the family governess, Emily Richardson, who died of cancer within 3 years of their marriage. During her illness the family took in a stray kitten, named Peter, who cheered her up during her illness and gave Louis a direction for his art, which became his passion. From the 1880s onwards Wain’s cats walked upright in human clothing of the highest fashion, came with all sorts of facial expressions, enjoyed smoking, played musical instruments, hosted tea parties, played games, went fishing and to the theatre. These parodies of human behaviour became immensely popular.

6. Louis Wain, and two of his cat paintings. (Images from the internet – photo by Lascelles & Co.)

Despite his popularity and huge output (he could produce up to 600 drawings a year), Wain was not good with money and during the First World War he sank into poverty. He lived with his sisters in Brondesbury Road. Having developed a mental illness, he died at Napsbury Hospital, near St Albans. He is buried in his father's grave at St. Mary's Roman Catholic Cemetery, Kensal Green.

At the start of Kilburn’s development, land owners or builders were responsible for the infrastructure of their own developments, including roads and sewers. Gas street lighting was first introduced in Kilburn near the bridge in 1849, and extended in 1861. Kilburn used the Metropolitan Board of Work’s sewers, although Willesden fell outside its area.

So many houses had been built in Kilburn that many could not be sold or let as family homes. It was common to find rooms let out to several families. The poorer areas of Kilburn became overcrowded, in 1894 with 11 persons per house, compared with 6 in the rest of the parish. The death rate for children under 5 in Willesden in 1875 was 45 per 1,000, with Kilburn the worst area, where diarrhoea, tuberculosis and respiratory diseases were prevalent. Healthcare, if you could afford it, was provided by local clinics, but for hospital residents went to St. Mary’s Paddington or New End in Hampstead.

The large estates’ lands still had some farms, which mainly produced hay for London horses, as well as providing grazing for cattle, and there were also several nurseries. But each successive decade saw less farmland. In 1855 Paddington Burial Board bought 22 acres of a farm off Willesden Lane and set up a civic cemetery. Today it is run by Brent and is Grade II listed. The cemetery includes 213 graves for casualties of the First and Second World Wars. 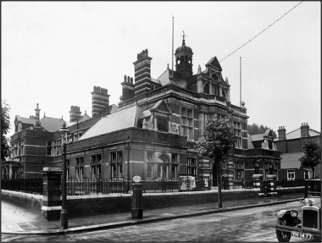 Local government only developed gradually. The local authority for Kilburn was originally the Willesden Parish vestry (and Hampstead vestry, respectively east of the High Road). This organised a vote in 1875, that set up the Willesden Local Board, which in turn was succeed by Willesden Urban District Council in 1894. Willesden Town Hall was built in Dyne Road, on the site of Waterloo Farm, and opened in 1891. (The building was demolished in 1970, after the newly formed Brent Council had chosen Wembley’s more modern Town Hall as its headquarters.) 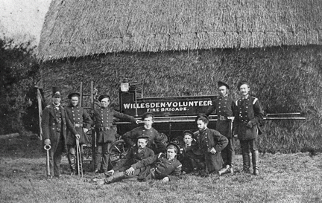 A volunteer fire service was formed after the fire at Mapesbury Mill on Shoot Up Hill in 1863, with headquarters in Bridge Street, near the tollgate. A new station, under the control of the Metropolitan Fire Brigade was opened in Salusbury Road in 1884, which covered the Kilburn area until the Second World War. The fire station was next to Kilburn Library, the first public library to be opened in Willesden in January 1894, which was enlarged in 1908. 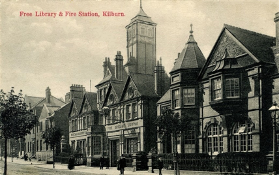 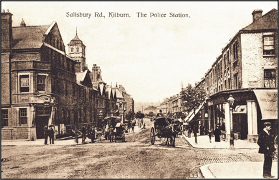 The police station, as shown on the photo above, is on the corner of Salusbury Road and Harvist Road, - still a police station today, although the building has been completely re-built in the 1970s. 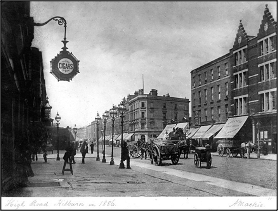 Kilburn became a thriving commercial centre, with the Edgware Road through it, featuring a continuous line of shops by the 1860s. It gained the name Kilburn High Road in the 1880s. Foyle's bookshop started in Kilburn, moving to Charing Cross Road in 1926. By 1909 there were 300 shops here, many owned by foreigners, some of them Jewish immigrants. 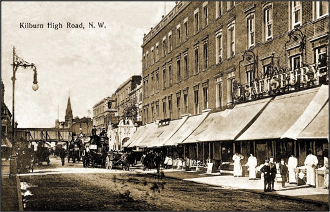 Industry was here, too. There was tile making in Kilburn as early as the 16th century. In 1862 a railway signal factory was built in Kilburn Lane (later called Canterbury Road). The Saxby & Farmer works became the largest employer in Kilburn, although it moved to a larger site in Chippenham, Wiltshire, around 1906, after taking over a similar business there.

By 1890 there were coachbuilders, bicycle manufacturers, and monumental masons (for Paddington Cemetery). Kelly & Craven’s Cemetery Stone Works in Willesden Lane did plenty of business, as most people were buried (cremation did not become common until the 20th century). Unfortunately for Mr Kelly, the stone dust from his work was a health hazard, and he was just 51 years old when he was laid to rest.  Light engineering and printing were also established by 1914.

With the rapid increase in population came a rise in the number of churches. We’ve already seen St Paul’s Church in Part 3, and non-conformist ministries were quick to follow the housing developments such as those by James Bailey. St James’s Episcopalian Church was built in Cambridge Avenue in 1863, using a prefabricated corrugated iron system. Commonly known as ‘the tin tabernacle’, it is surprisingly still there today, and although no longer a church, and officially called Cambridge Hall, it is a Grade II listed building. In 1865 the Reverend Thomas Hall had West Kilburn Baptist Church built, to designs by his brother, who was an architect. After more than 150 years, that is still in use, and a locally listed building.

Next week we will continue to look at local churches, schools and much more, as Kilburn’s story continues into the 20th century.