Cuts in children's concessionary fares, insisted upon by the Government in the proposed TfL budget settlement were due to come into effect after the half-term holiday but are likely to be delayed.  Meanwhile a campaign against the changes, in parallel with that regarding the Freedom Pass, is well underway.

This is an edited version of the Child Poverty Action Group's press release on the issue published last month:

Londoners are uniting to oppose the suspension of free travel in the city for 11-17 year olds – as a survey from Child Poverty Action Group (CPAG) shows the suspension will force some families to cut back on daily living expenses – including food – while restricting children’s access to family, friends and out-of-school activities (see Notes to Editors for filming info/timings).

Children and young people in London have been able to travel around the capital for free, or at a discounted rate, using a Zip card, since 2006. But in May the Government made the suspension of free travel for 11-17 year olds (and 18 year olds who turn 18 in their last year of school/college) a condition of its emergency funding agreement for Transport for London (TfL).

Child Poverty Action Group’s Don’t Zap the Zip campaign commissioned an online YouGov survey of over 1000 11-18 year olds and their parents. Almost three quarters (74%) of youngsters surveyed who have a Zip card said they used their Zip card to get to school or college. But if free travel for 11-17 year olds goes, only those who live more than two miles from their school or are classed as vulnerable will be able to travel to school or college for free from after the October half term. Children aged 10 or under will retain free travel.*

CPAG says the suspension will hit low income and BME families the hardest – just as we go into a coronavirus recession – and calls on the Government to remove it.

The survey findings suggest ending free travel will have a disproportionate impact on children from BME families who make up almost 60% of London’s under-18 population:

According to an initial estimate from London Councils***, the suspension would cost parents more than £80 million per year (ie £37 million for parents of children who will have to pay for home-to-school transport, £2 million for young people who are apprentices or not in education or employment and around £45 million for the cost to parents of all children and young people aged 11 to 17 who will have to pay for bus and tram journeys).

TfL and the Mayor of London oppose the suspension which is subject to discussions on how it will be implemented.

London Councils and London boroughs are concerned about how the proposal will be implemented, the implications for young people and parents, particularly for those from the most disadvantaged backgrounds. There are also real concerns about the financial, resource and legal implications for councils at this already challenging time.

Child Poverty Action Group is concerned that although the Government describes the removal of free travel as ‘temporary’, it has not clarified how long it will last nor what the fare structure will be for different age groups (11-16, 16-18).

Low-income London families have been under huge financial strain because of the pandemic and, for many, things could get worse rather than better as furlough ends and unemployment rises. Now is not the time to pull the plug on vital help with children’s travel costs. This proposal is a blunt tool, the full impact of which has not been properly considered.

Many journeys are unavoidable and, as our survey shows, if the Zip card goes, many low-income parents will face additional costs and find it even harder to provide for their children in very uncertain times.

We live in a big expensive city where travel is necessary to get about, go to school and take advantage of opportunities that are not on our doorsteps. Young Londoners have already lost so much to keep everyone safe – it isn’t right to limit their lives further as the city comes back to life. Therefore, we are calling on the Government not to “Zap the Zip” because London’s children and young people deserve better.

The Government’s stated aim in removing free travel is to reduce the number of young people using public transport in order to aid social distancing during the pandemic. But there are already maximum passenger numbers on buses to enable social distancing – as well as additional ‘school services’ buses from TfL, staggered opening hours and arrival times, plans for cycling support and reduced cohorts of students in schools. And more positive methods of encouraging children to walk or cycle to school which do not involve placing a financial burden on their families could be adopted, such as walking initiatives, bikes and cycle training.

Some families with children who started secondary school or college this September will have chosen a school on the assumption that their child’s Zip card will cover the journey. If the school is within a two mile journey but beyond walking distance from their home, families will have to cover fares to school unless they are eligible for free travel because the children are vulnerable.

Other families who have chosen a secondary school or college further than two miles from home will have to apply for free travel – although the Government has not said how the applications process will work.

Families also have to make secondary school applications for 2021 places before the end of October, and sixth forms usually start accepting applications in September. So it’s possible that students choosing between a secondary school or sixth form that is within two miles of their home and another that is further away will be making that decision this month based on little information about long-term travel costs. 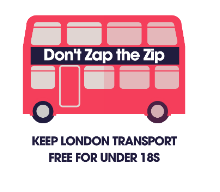