At the end of Part 4 (“click” if you missed it) I said that we would continue to look at some more churches, but there is much more to uncover this week! 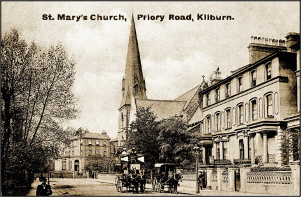 1. St Mary's Church, in the age of horse drawn vehicles. (From the internet: www.images-of-london.co.uk )

We’ve already mentioned St. Paul’s, Kilburn Square (founded in 1829, demolished in 1934). St. Mary’s Church started in 1856, when the developer of the Abbey Farm estate, George Duncan, presented a site for it (on the Hampstead side). It holds the only known relic of the Kilburn Priory – a small brass plate of the prioress Emma de Sancto Omero (you can see a picture of this in Part 1).

Quex Road, also to the east of Kilburn High Road, boasted no less than three places of worship, a Wesleyan chapel, a Unitarian Hall and the Roman Catholic Church of the Sacred Heart of Jesus. This was designed by Edward Welby Pugin and opened in 1878, with a school for Catholic priests nearby. It served the large Irish community, which expanded rapidly in the 20th century. 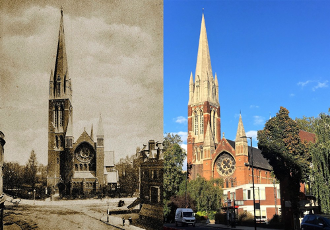 However, the true gem of Kilburn is St. Augustine’s Church in Kilburn Park Road, known as "the Cathedral of North London". Founded in 1870, St. Augustine’s was consecrated in 1880 as an Anglo-Catholic Church of England and is listed as a Grade I building by Historic England. The spire finally crowned the magnificent Gothic Revival building in 1898. It was designed by John Loughborough Pearson, an architect who specialised in ecclesiastical architecture and worked around the world. Some internal work was designed by Sir Giles Gilbert Scott (of Battersea Power Station, Liverpool Cathedral and the red telephone box fame). The worship followed ‘high’ Anglican tradition, which was closer to Roman Catholicism.

At one point the church had four valuable paintings, a Titian among them, given to the church by Viscount Rothermere. One of them was stolen and the church decided to sell the rest because of security issues. The writer Thomas Hardy visited from time to time, when he was in London, to hear the music and admire the magnificent building. The composer Leonard Bernstein conducted an English Bach Festival concert at the church in 1977. The ornate interior of St Augustine's was used in the filming of Young Sherlock Holmes (1985). 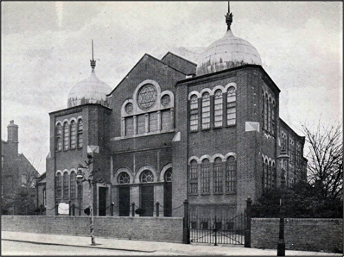 Although Christianity was still the main religion in England in late Victorian times, that was beginning to change. One of the first Jews to settle in Willesden was Polish-born Solomon Barnett, a builder and property developer who lived in Brondesbury Road. He invited other local Jewish residents to his home in 1900, and they agreed to build a synagogue. He sold them a site in Chevening Road, at less than cost, and the Brondesbury Synagogue opened in 1905. It had an unusual Moorish design, which was unique in the area at the time, and served the Jewish community in the whole of the Willesden for several decades. It closed after a fire in 1965, and the building was sold to the Iman Al-Khoei Foundation in 1974.

The first elementary schools in Kilburn were run by churches. St. Paul’s, Kilburn was the earliest in 1847, and was a “National School” part-funded by National Society for Promoting Religious Education. St. Augustine’s Church also had a school. In 1870 the Education Act was passed, providing for elementary schools, known as Board Schools. Local churches feared that religion would not be taught in these, and by 1882 had set up an association to establish new Church of England schools in poor districts.  Christ Church School in Willesden Lane (built by Solomon Barnett) was one of these, first opening (for infants) in 1889. 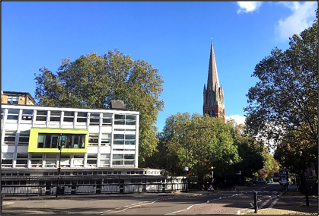 Small fees were charged in some elementary schools until 1891, when primary education became free. Fees for secondary education were only finally abolished in 1944.

Kilburn Grammar School was founded in 1897 as a boys’ choir school by Dr. George Bonavia Hunt, vicar of St Paul's, Kilburn. This was the time when there was no state provision for secondary education. From one in Willesden Lane it moved a few times to increasingly larger premises, until it founds its permanent purpose-built home at Salusbury Road in 1900.
Dr. Hunt, who taught musical history at the University of London, remained there until 1904.

In 1907 the school was purchased by the local authority, and became the first state secondary school in Willesden. With the formation of Brent in 1965, the borough policy of closing grammar schools led to the school becoming a comprehensive in 1967, renamed Kilburn Senior High School. In 1973 it merged with the girl’s school on the opposite side of the road to form Brondesbury and Kilburn High School, and in 1989 it moved to a different place and became part of Queen's Park Community School. The Edwardian buildings in Salusbury Road are now Islamia Schools.

The original Kilburn Grammar paved the way for university and lead to successful careers in business, academia, civil service, law and arts. Amongst its alumni were Richard Baker, BBC newsreader and broadcaster, Kenneth Howard, an artist who painted for the British Army from the 1970s, the linguist Professor Simeon Potter, who also wrote a history of Willesden, and another distinguished local historian and Brent councillor, Len Snow. Brondesbury and Kilburn High School for Girls produced Lesley Hornby (better known as Twiggy, a famous 60s fashion icon) and Margery Hurst, who founded the Brook Street Bureau employment agency. 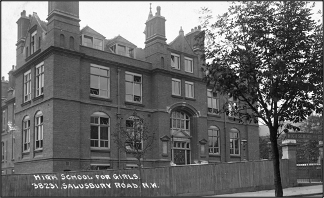 Kilburn had a large number of private schools. At the time when board schools were regarded as being for the lower classes, those who could afford it preferred to pay for education. Many were on the Hampstead side, such as the Haberdashers’ in Westbere Road.

In the 1870s Henley House School at the corner of Kilburn Priory was headed by John Vine Milne, whose son Alan Alexander, author of Winnie the Pooh stories, was born there in 1882. The first science teacher at Henley House, appointed in 1888 was H.G. Wells, the pioneer writer of science fiction. 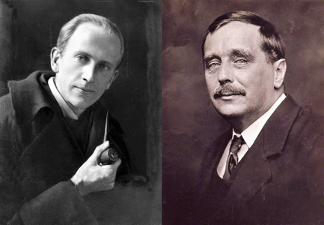 Kilburn High Road, in the meantime, continued to bustle with trade and entertainment. Kilburn’s position on the old Watling Street ensured a good number of drinking establishments from early times. The public houses were much more than a place for a pint – they were hotels, functions rooms, auction sites, coroners’ inquests premises, even makeshift mortuaries. By 1872 there were 8 pubs in Kilburn High Road, and 13 more in the neighbourhood. There was a brewery and several beer retailers. 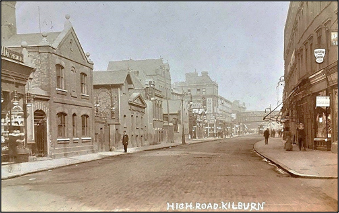 The building on the left which looks like a church hall is Kilburn Brewery, built in 1832 by the Verey brothers. They were so successful that by 1853 they had their own wharf on the canal at Lower Place in Harlesden to bring in supplies. The brewery complex consisted of the main building with a fine frontage, a malt house and stabling for horses. In 1866 it was taken over by Michell and Phillips, which later became Michell and Aldous. It closed in 1920, and the building was later used by the Gas, Light and Coke Company. Today the site is occupied by several shops, with the original façade still being seen from numbers 293 to 313 High Road.

The High Road was also a main shopping centre for much of the surrounding area. Drapery and furnishing businesses had competing shops - Kilburn Bon Marche, dating from 1880s, the Grange Furnishing Stores at 127-9 High Road, catering for high class customers, and the most famous store in Kilburn, B.B. Evans at 142-162 High Road. It was started as a drapers’ in 1897, by Benjamin Beardmore Evans, who used to work for Willesden Urban District Council. It expanded in 1905, but in 1910 was destroyed by fire and then re-built. When it closed in 1971, it was the only department store in Kilburn. Since then the buildings went through a succession of occupants, and are now Sports Direct, T.K. Maxx and Aldi.

Speculative builders continued to provide employment opportunities around both sides of Kilburn High Road. John Allen and Sons ran a successful building company – they built many houses on the Hampstead side of Kilburn. At the end of the 19th century the firm took over The Elms, the old mansion house, converted it into offices and built a factory in the grounds called Palmerston Works. In 1901 they built new stands at Ascot Race Course.

During the First World War Kilburn suffered some bomb damage in a couple of Zeppelin raids near Belsize Road, Oxford Road and Canterbury Road. One of the area’s main contributions to the war effort was the housing of Belgian refugees, of whom 250,000 fled to England after the Germany army invaded their neutral country on its way to attack France. By September 1914, churches and local refugee committees where organising homes and support for refugee families, and Rabbi Lazarus from Brondesbury Synagogue had set up a hostel in Willesden Lane for Jewish refugees from Antwerp. 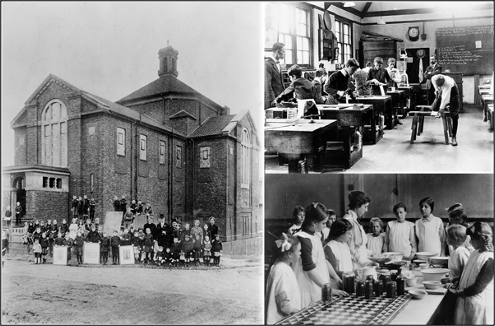 In 1915, Kilburn Grammar School had eight Belgian boys, who it accepted with reduced fees, but there was a much larger number of refugee children who did not speak any English. In April 1916, the King Albert Belgian School was set up in the Sunday School buildings at Brondesbury Park Congregational Church, jointly funded by Willesden Council and the Belgian Government. It had around 60 pupils, and taught lessons in English, French and Flemish. The School closed in March 1919, by which time most of the families had returned to Belgium.

In 1916 the grounds of The Elms became home to the Central Aircraft Company (179 Kilburn High Road), the subsidiary of a woodworking business. They built wooden components for aircraft manufacturers, but by the end of the war they had designed their own aeroplane. Their ‘Centaur’ aircraft first flew from a nearby field in Willesden Lane called ‘Kilburn Aerodrome’ in 1919, and was later used at a flying school at Northolt aerodrome.

Their Centaur II was designed to carry six passengers, and could have been one of the world’s first airliners; but only two were ever built, and they were used for pleasure flights over beauty spots in London, Kent, Wales and even the Belgian battlefields. However, the idea that people would be owning planes as they did cars did not take off, and by 1926 the company stopped making aeroplanes and concentrated on furniture.

We will look at the homes where people lived, and the places of entertainment they enjoyed, as we move further into 20th century Kilburn next time.