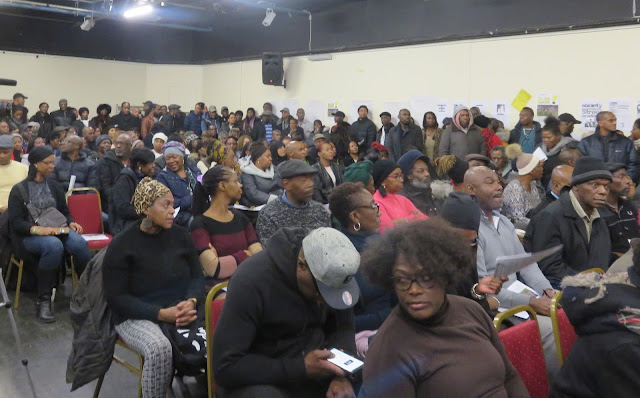 The High Court verdict in the Brent Council versus Bridge Park case was delivered virtually today. Michael Green QC found in favour of Brent Council's claim on the land and granted an injuction against any further claims.  The redevelopment can now go ahead.

Although admiring the initial concept of a community centre addressing the needs of the community at the time of the riots and paying tribute to Leonard Johnson's  charismatic leadership qualities he decided the case strictly on its legal merits, but at the end of his long judgment (posted in previous article) called for co-operation between the parties in the case. He said:

I do not want to end this judgment on that note. While I have been somewhat critical of the Defendants’ strategy of opposition to Brent’s proposals in relation to Bridge Park, I am saddened that it has been necessary for this dispute to be determined by me in a long judgment that deals with the legal position in relation to the ownership of Bridge Park. The fact that I am delivering this judgment means that the mediation and settlement talks have failed to reach an outcome satisfactory to both parties. As I said at the beginning of this judgment, a trial of the issues before me is not the way to resolve the real issues between the parties. This dispute has come to a head in the context of understandably heightened tensions within the black community and the important focus on the Black Lives Matter movement. While the parties may be able to take such matters into account in seeking to resolve their differences out of court, I cannot do so. I had to decide the case on the facts surrounding the acquisition nearly 40 years ago and the law.

I totally understand that Bridge Park was Mr Johnson’s conception and that the critical aspect of it, if it was to work and the riots were to be avoided, was that it would be run and managed by the local community for the local community without any direct involvement of Brent. Brent understood this, as did central government and the GLC, and they all shared Mr Johnson’s and HPCC’s philosophy. Everyone wanted it to succeed in that way as the stakes were so high. And, for a time, it did succeed. But the failure to set up a community co-operative or to agree the terms of a lease to the Steering Group Company, then the break-down of relations between HPCC and Brent leading to Brent’s repossession of Bridge Park and, for the last 25 years, HPCC being completely uninvolved in its management, all undermine HPCC’s claims to a beneficial interest. Those facts also confirm that the absence of any reference in any of the documentation to Brent holding the Property on trust whether for charitable purposes or HPCC or anyone was deliberate, reflecting the understanding of the parties that Brent did not hold the Property on trust. Instead the Property was held beneficially by Brent for its statutory purposes which are essentially to act in the best interests of the community, as I believe Brent is striving to do with its proposals for Bridge Park. Mr Gutch, the Defendants’ witness, admitted that “at the end of the day, the asset was Brent’s” even if it was acquired so as to be run by the community and even if the community aspired at some stage to own it.

It is obvious that something needs to be done to Bridge Park. Brent cannot just allow it to languish and be of diminishing use to the community. Brent has to respond to the current needs of the community but says it can only provide a newly enhanced leisure and community facility if it sells off part of the Property. It is not right, in my view, for Mr Johnson and HPCC to claim a veto on anything that Brent may wish to do with the Property based on an inaccurate recollection of what was said at the time of the acquisition. All of Brent’s witnesses paid glowing tributes to Mr Johnson and the tremendous achievements of HPCC. I do too. But now that the legal issues have been resolved in my judgment, I would again urge the parties to move on and seek to achieve, by mutual co-operation and agreement, the best outcome for Bridge Park and the local community.

Muhammed Butt, leader of Brent Council, made a statement following publication of the Judgment:

It’s great that the court has made the legal position over the ownership of Bridge Park absolutely clear.We’ve always said that whatever the outcome of the court case, our door remains open to everyone in the community to discuss the future of Bridge Park and that absolutely remains the case.

What this result means is that we can now get back to work in delivering on the promise of unleashing the potential that’s been trapped for far too long in this treasured but crumbling site. This is the chance we’ve all been waiting for to come together as a community and finally revitalise this invaluable facility.

If you want to work with us on the future facility please do get in touch.

The Bridge Park Campaign has been contacted for a comment.