The Planning Committee of October 14th was notable as the first the be chaired by Cllr Matt Kelcher following the Labour and Council AGM, for its length and for the way in which the themes that emerged during the discussion of the application to redevelop the site of the Willesden Green PoliceSstation revealed some of the conflictions and contradictions in Brent Council's planning policies and guidance.

This is the Council's recording of the decision:

Although the lack of affordability housing in the development took up a great deal of time in the discussion, and was cited as a reason for rejection by some councillors, they were 'cautioned' by Gerry Ansell, Head of Planning and Development Services, that when it came to professional advice on viability there was no viability in this scheme. Independent professional advice was that if the scheme was to be financially viable for the developer all 28 units had to be sold at market rates and no affordable housing could be provided. Planning Officer David Glover said that the concerns over affordable housing could be recorded in the Minutes of the meeting but not in the reasons for refusal.

Ansell said that there were particular factors in this development that reduced viability.  It was in a sensitive location with a building of quality with associated costs for its retention and restoration that reduced land values.

He said that affordable housing was a core Council policy but issues are 'a matter of balance.' He assured councillors that officers pushed developers hard on affordability.

Cllr Arshad Mamhood was particuarly vexed working out that the market value was about £10m and the developer was only required to contribute £143,000 to off-site affordable housing elsewhere. Councillors were told that this could be used for the equivalent of 1-1/2 units elsewhere in the borough.

Cllr Mahmood asked that councillors be able to look more closely at the detail of Viability Assessments so that they could scrutinise them. He was told that they were available on the Council website before applications came to Committee. 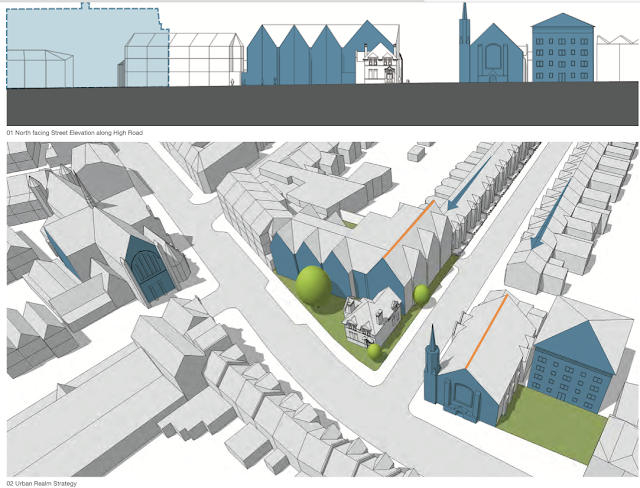 The retained police station with the new development behind

The recently liberated (from Cabinet) Cllr Tom Miller, representing his ward, spoke against the development.  He told the Committee:

I feel that with only this proposal on the table, what the Committee are being asked is, 'Would you rather have a development that is out of character with, not just the local area, but a conservation area?' and show we are not serious about preserving that or, 'Would you rather have a proposal that shows we are not serious about having  enough affordable homes?'

It's asking the Local Authority to pick which of our policies we should ditch and that for me has 'REJECT' written all over it. It is throwing down a challenge to the Committte, 'Which of these is not important.'

Both he and fellow Willesden Green councillor, Cllr Donnelly-Jackson said that they had not been approached bu the developers and consulted.

A positive aspect of the discussion was the planners assertion that they had been keen to ensure the retention of the police station and recognised its historial merit depite it not being a listed building. Cllr Dixon spoke about the important historical character of this section of the High Road.

Other issues that came up were carless developments that just meant residents would spill over into nearby streets to park, the development overlooking neighbour's gardens and in one particular case reducing the light  entering a neighbour's property to almost zero. The sheer bulk of the property in contrast to the local side streets  and the High Road and the lack of proper consultation were major issues - along with the 146 objections to the scheme.

The Committee voted to reject the proposal with Cllr Liz Dixon and Cllr Saqib Butt abstaining.

A Willesden Green resident emailed me about the Police Station planning decision (above), and copied in the GLA planning officer with whom we were both already having correspondence about the 1 Morland Gardens (Victorian villa) application, which is coming up for a decision by the Mayor of London soon.

This is the text of my reply (also copied to the GLA planning officer):-

'This is very interesting. A local resident drew my attention to the Willesden Green Police Station application several weeks ago, and I did have a look at the papers for it, as the situation had some similarities to the 1 Morland Gardens proposals.

At Willesden Green, the late Victorian police station had been identified as a non-designated heritage asset for planning purposes, even though it had never been locally listed.

The (private) developers had taken this on board, and had designed a scheme which retained the original Victorian section of the building, while demolishing later additions on the site.

Their scheme deliberately set back the new homes, so that the visual integrity of the Victorian building in the streetscape was preserved, and their new building was in style and materials subordinate to the design of the Victorian police station.

And yet you report that the proposal was rejected at Brent's Planning Committee, on the grounds of "massing" (while Brent Council's own "approved" proposals for the new building on the 1 Morland Gardens site are too high and too dense for that site, according to the Council's own planning policies and draft Local Plan, a view expressed by a local Stonebridge Ward councillor, on behalf of himself and his colleagues, at the Planning Committee meeting on 12 August).

There certainly seem to be double standards on show, between what Brent Council and its planning officers will allow themselves to do, as opposed to what is allowed for others. That cannot be right.'

'a matter of balance' - but planning officers always want councillors to accept the side of the balance THEY say is acceptable!!!