Welcome back to this second instalment of Kilburn’s story. If you missed Part 1, please “click” on the link. 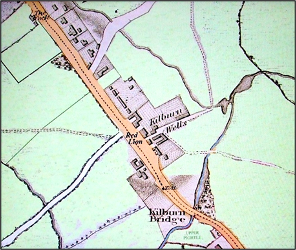 1. The location of several Kilburn pubs on a map from 1800. (From Google Maps World, on the internet)

Modern Kilburn is well known for its many public houses, but these only continue a long tradition. The position of Kilburn on a major route facilitated the establishment of several inns from the 15th century onwards. The “Red Lion” claims to have been established in 1444, and “The Cock” was probably around by the early 1500s. The “Black Lion” may date from 1666, but it is the story of “The Bell”, which existed by 1600, that we will look at here.

A spring of water with medicinal properties (it was impregnated with iron) in Abbey Fields gave rise to Kilburn’s reputation as an 18th century pleasure resort. It was in the grounds of The Bell. In 1714 the spring was enclosed in a brick reservoir. By 1733, The Bell’s proprietor promoted the water as a cure for stomach ailments, in imitation of the nearby Hampstead Wells. 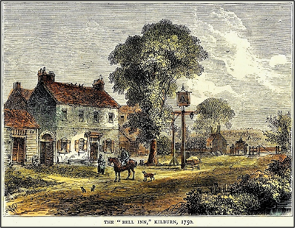 Joseph Errington became the landlord of the pub, which came to be called “Kilburn Wells”, in the 1770s. He placed an advert in The Public Advertiser in July 1773 which lists its many attractions:

‘Kilburn Wells, near Paddington. The waters now are in the utmost perfection: the gardens enlarged and greatly improved; the house and offices re-painted and beautiful in the most elegant manner. The whole is now open for the reception of the public, the great room being particularly adapted to the use and amusement of the politest companies.

Fit either for music, dancing or entertainments. This happy spot is equally celebrated for its rural situation, extensive prospects, and the acknowledged efficacy of its waters; it is most delightfully situated near the site of the once famous Abbey of Kilburn, on the Edgware Road, at an easy distance, being but a morning’s walk, from the metropolis, two miles from Oxford Street; the foot-way from the Mary-bone across the fields is still nearer. A plentiful larder is always provided, together with the best of wines and other liquors. Breakfasting and hot loaves.’ 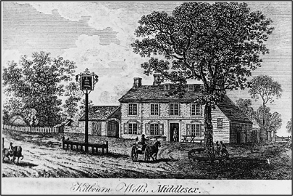 Despite seeking to welcome ‘the politest companies’, Kilburn Wells soon acquired a notorious reputation, as it attracted visitors from the nearby Belsize House, an immoral place of entertainment!

In 1801 Dr John Bliss, a famous physician who specialised in treating gout, carried out a series of experiments and analysed the water from both Kilburn and Hampstead. He wrote about Kilburn –

“The spring rises about 12 feet below the surface and is enclosed in a large brick reservoir, which bears the date of 1714 on the key stone of the arch over the door. The water collected in the well is usually of the depth of 5 or 6 feet but in a dry summer it is from 3-4, at which time its effect as a purgative is increased…. When taken fresh from the well a few inches under the surface it is tolerably clear, but not of a crystal transparency – at first it is insipid, but leaves and evident saline taste on the tongue. At rest, and even on alight agitation, no smell is produced but on stirring the water forcibly from the bottom of the reservoir, it becomes turbid from impurities which have been collected in it, and a considerable odour is emitted like that from the scouring of a foul gun barrel.”

Bliss said that when between one and three pints were taken at very short intervals, the purgative operation was slow and gentle. He recommended it for indigestion and various other problems.

Until 1819, when duelling was outlawed, Kilburn Wells was also a favourite spot for duels, being suitably secluded. A particularly infamous duel was fought here on 2 July 1792, between James Maitland, the 8th Earl of Lauderdale and General Benedict Arnold, ‘America’s first traitor.’ Arnold was an officer in the American Army, and when in command of the garrison at West Point, he secretly negotiated to be paid for surrendering his garrison to the British. He later defected and lived comfortably in Britain.

5. 8th Earl of Lauderdale, by Gainsborough, and a contemporary illustration of a duel. (From the internet)

During a speech in the House of Lords, Lauderdale had insulted Arnold, who challenged him to a duel at Kilburn Wells. Thankfully, unlike in the illustration above, neither participant was hurt. In fact, only days before, Lauderdale had ‘duelled’ on the same spot with the Duke of Richmond, but their argument was settled with a shake of hands!

The Bell was also the scene for dog fighting and pugilism - bare-knuckle fighting, the original form of boxing. Bare-knuckle fighting was very popular in the 18th and 19thcenturies and attracted big crowds. In 1783, one of its most celebrated figures, Daniel Mendoza, beat John Matthews here in a fight that lasted 2 hours. 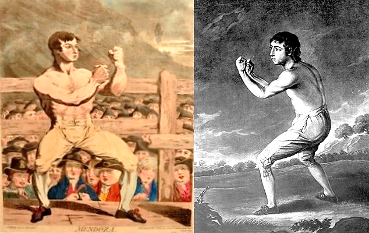 Mendoza, from Whitechapel, was the first Jewish champion fighter, and was Heavyweight Champion of England from 1792 to 1795. He developed his own concept of fighting. His popularity, and acceptance by British royalty (his patron was the Prince of Wales, and he was the first Jew ever to speak to King George III) helped elevate the reputation of Jews in English society, which was deeply anti-Semitic at the time.

Despite the fact that at the height of its popularity Kilburn Wells could rival the nearby Hampstead Wells, some of its owners went bankrupt. In 1837, the line of Robert Stephenson’s London & Birmingham Railway (later the London & North Western) went through Abbey Farm fields, cutting the Kilburn Wells gardens in two. The part next to the pub became a tea garden, and that on the other side of the railway, which contained the well, became a kitchen garden.

The wells were in decline, but under its original name, The Bell remained popular as a tea garden and a tavern. The Old Bell pub was demolished and rebuilt in 1863. The well disappeared in the Victorian building boom. 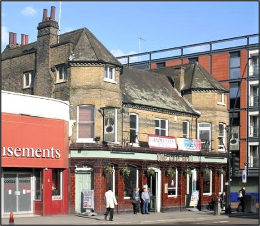 The memory of Kilburn Wells lives on in the name of the Wells Spa House (1a West End Lane), and a stone plaque on No.42 Kilburn High Road at the junction with Belsize Road, which says that this was the site of Kilburn Wells. There is also a black stone square on the ground in front of the building. 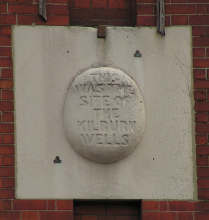 Eventually, Kilburn developed to be more than just a place of pubs and farms, and we will explore that side of its history next week. I look forward to sharing that with you.