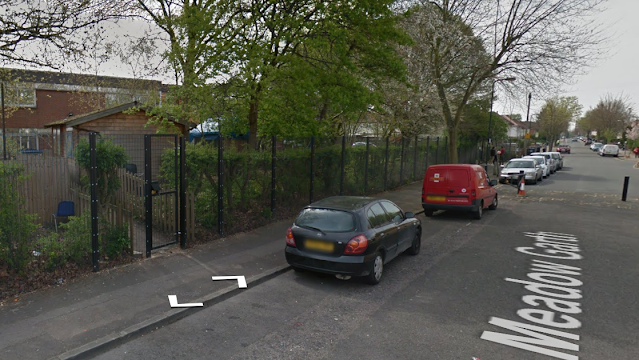 The Cabinet next week will decided whether to agree to rename a section of Meadow Garth in Neasden after the founder of the Neasden Temple (BAPs Swaminarayan Mandir) Pramukh Swami, the spiritual leader of the Swaminarayan sect until his death in 2016.

He inaugurated the Mandir in 1995 and the 20th anniversary was celebrated in 2015.

The proposal is to rename the section of Meadow Garth from Brentfield Road to the barrier (see first photograph) 'Pramukh Swami Road.'

Brentfield Primary School objects because the proposal splits the site with the nursery entrance in Pramukh Swami Road and the main entrance in the retained section of Meadow Garth. They point out that the school has recently rebranded with the Meadow Garth address and in addition say that  the change does not reflect 'our community or th school community.'

The change is strongly supported by several residents in the affected section of Meadow Garth but other residents object on ground of the inconvenience, stress and expense that will be caused.

The proposed name is not the easiest to pronounce and could be received wrongly during call handling. It is always better to act on the side of precaution when choosing street or building names to minimise the risk of delay when attending an incident. We do object to the renaming of part of 'Meadow Garth Road' as it currently doesn't present any issues for us in terms of locating this address. The guideline states that renaming/renumbering existing streets and buildings is normally only considered when changes occur which give rise to problems for the occupiers, post office, emergency services etc.

This was later qualified by the LFEPA Borough Commander who said that this was advice from the national guidelines, 'but you are free to make any decision you wish.'

The officers say the Cabinet should take the objection seriously as delays of a few minutes in response times can have serious life consequences for firefighters and residents.

On the cultural and visitor attraction aspects the report states:

The Temple is an important asset to Brent, both for residents and as a visitor attraction; it provides valued facilities to many residents and visitors. Although the rationale for applying for the name change has not been clearly set out in the application, it is important to recognise the desire of the Temple to have a street presence which reflects its culture and that of its thousands of attendees and visitors.