In Part 2 (“click” on the link if you missed it) of our look at Kilburn’s past, we had reached the early years of the 19th century. This week, we’ll venture further into that century.

Before 1800 Kilburn was mostly rural, with some houses and cottages, as well as a number of inns catering for travellers and stage coach services, along the main road. Although several houses (mainly on the Hampstead side) had been built in the area in the 17th century, the road conditions were bad, and highway robbers were at large. Money from trusts set up by benevolent gentlemen like William Kempe, Edward Harvist and John Lyon were not enough to improve the roads.

A new source of funds was needed to maintain the highway, and in 1710 a turnpike (an old form of toll road) was created, with a toll gate at Kilburn Bridge to charge road users at the entrance to Willesden parish. This place is now near the Queen's Arms at Maida Vale. Later it was moved to Shoot Up Hill, and the turnpike was abolished in 1872. 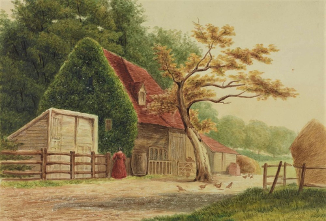 Kilburn Park Farm, shown above in 1865, lay "nearly opposite the ’Old Red Lion’ Edgware Road, Paddington, and immediately adjoining Verey Brewery." The path seen in front of the barn carried on to Willesden. The part of Kilburn on the Willesden side belonged to the manors of Bounds, Brondesbury and Mapesbury. These manors were all the property of St. Paul's Cathedral. Mapesbury (named after Walter Map, an early medieval writer, courtier and priest) and Brondesbury ('Brand's manor') were respectively situated north and south of Mapes (later Willesden) Lane. Local estates in the south of the area included Abbey Farm, which covered the former Kilburn Priory. 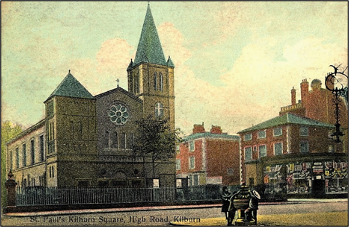 3. St Paul's Church, Kilburn Square, from the High Road. (From the internet: www.images-of-london.co.uk )

Some houses were built on the Kilburn Priory estate and at Kilburn Square, around St. Paul’s Chapel (built in 1835, demolished in 1934, St. Paul’s was the only church along the front of Edgware Road from Marble Arch to Edgware). The rural tranquillity of the early 19th century Kilburn attracted middle class professionals who liked to live in ‘beautiful villas’, scattered along the Edgware Road. We are going to look at some houses of note and their occupants. (If you would like to see maps showing estate boundaries and the locations of the major houses, please refer to ‘Kilburn and West Hampstead Past’ by Dick Weindling and Marianne Colloms, which you can borrow from Brent Libraries, ref. 942.142)

The first large house to be seen on entering Kilburn from the south was the Willesden Manor House, on a site between today’s Oxford and Cambridge Roads. There was a 16th century estate of 160 acres, with a farmhouse in this area. In 1649 it was recorded as a house of six rooms. By 1788, it was owned by Lady Sarah Salusbury, the widow of Sir Thomas Salusbury, a judge of the High Court of Admiralty.

She settled the estate in trust for her husband’s nephew, the Rev. Lynch Salusbury, and when he died in 1837, it passed to his daughter Lady Elizabeth May Salusbury, who had married her cousin Sir Thomas Robert Salusbury (there were other occupants there later). Lady Salusbury sold her properties to the Church Commissioners in 1856, and we will look at what happened to them in the next part of Kilburn’s story (although the Salusbury name may give you a clue).

From around the middle of the 18th century, a house called The Elms, or Elm Lodge, stood on the site of the present day Gaumont State Cinema, at the junction of Kilburn High Road and Willesden Lane. Following a number of owners and occupiers (one of whom was Lady Salusbury in 1799), Mrs. Pickersgill was rated for the house from 1829 until 1832. She was probably the wife of Henry William Pickersgill R.A., an eminent portrait painter, who among his many works painted the writer W.H. Ainsworth, who later lived in the house. She was running a school for ‘female education’. 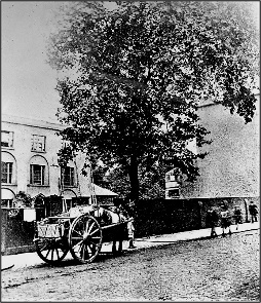 In 1832 John Ebers, a widower with two daughters moved into The Elms. He was a theatre manager and had a publishing business in Old Bond Street. In 1826 he had met a young man called William Harrison Ainsworth, who was to become his son-in-law, marrying his youngest daughter Fanny (both aged 21). Ainsworth came to London to study law, but soon gave it up and became a writer. Ebers introduced him into theatrical and literary circles, as well as publishing one of his early novels.

5. William Harrison Ainsworth, by Daniel Maclise, and an illiustration from "Rookwood". (From the internet)

Ainsworth and his wife first lived near Regent’s Park, but later moved to Kilburn. It was here that he began writing his first famous novel “Rookwood”, about the notorious highwayman Dick Turpin. Although the inn where Dick met his accomplices is based on The Cock in Kilburn, the story is fiction and there’s no historical evidence to link Dick Turpin to Kilburn. As we saw in an article about Church End, Ainsworth often used Willesden locations in his stories! It is from “Rookwood” that the widely held legend originates, of Turpin riding his horse, Black Bess, all the away from London to York (again, a fiction).

Ainsworth’s marriage was not successful, and in 1835 he separated from his wife and moved with his three young daughters to Kensal Lodge. His next home, Kensal Manor House, offered hospitality to famous literary figures of the day, including Dickens and Thackeray. Ainsworth published 39 novels, which enjoyed great success in Victorian England. He is buried at Kensal Green cemetery.

Another grand house with a famous Victorian resident, Kilburn House, was situated north of today’s Kilburn Square near Priory Park Road. At the beginning of 19th century, Kilburn House was a pleasant suburban villa with extensive grounds. For most of its previous history it was leased to wealthy tenants, who usually stayed only a few years. Between 1839 and 1856 the newsagent and future politician W.H. Smith lived here with his father, when they moved the family home from their offices in Strand.

William Henry Smith senior was a newspaper proprietor, who also ran a successful newspaper distribution business. He worked so hard that he became ill, and the family moved to Kilburn for a more restful residence. However, every weekday he, together with this son, also William Henry, got up at 4 am for the one hour journey of 5 miles to his Strand office! In 1846 the son became a partner, and W.H. Smith & Son was born.

William Henry the younger took the business to a new level, when, capitalising on the railway boom, he negotiated with various railway companies the running of book stalls at stations. Later he became an M.P. and served in senior government and ministerial posts, including his appointment, by Benjamin Disraeli in 1877, as the First Lord of the Admiralty, despite him having no naval experience. He was parodied as the character Sir Joseph Porter, in Gilbert and Sullivan’s 1878 light opera “H.M.S. Pinafore”, with a famous song in which he tells how he became ‘the Ruler of the Queen’s Navy’ by never going to sea, and because:

‘I always voted at my party’s call,
And I never thought of thinking for myself at all.’

The start of building development in the area annoyed the Smiths, and in 1856 the family moved from Kilburn to Hertfordshire. 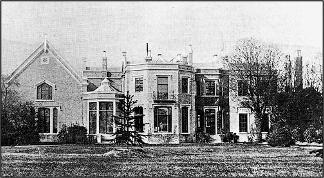 7. The Grange, Kilburn. (From “Kilburn and West Hampstead Past” by Dick Weindling and Marianne Colloms)

Among other notable grand houses were The Grange, on the Camden side, a ‘Gothic-style House’, occupied by the Peters family. Thomas Peters was a coach builder who made coaches for Queen Victoria, and his widow Ada run a literary saloon at the house. Hampstead Council bought the estate in 1911 to turn it into a park, but the grand house did not survive. The Grange Cinema opened on the site in 1914 (more about the cinema later). 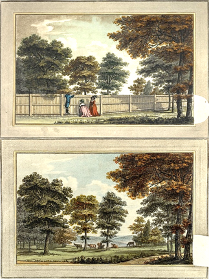 8. Before and after views of the grounds at Brondesbury by Humphry Repton. (Images from the internet)

Brondesbury Manor House was on the southern side of Willesden Lane, at the western edge of Kilburn. The estate was first mentioned in the 13th century, and the moated manor house was rebuilt in the 18th century as a three-storeyed villa, becoming the main home of Lady Sarah Salusbury. In 1789, she had the grounds landscaped by Humphry Repton (who also designed Wembley Park), and following his wishes it became known as Brondesbury Park.

Repton’s “red book” for Brandsbury still exists, and he reproduced his before and after views (replacing the fence with a “ha-ha”) in his 1794 book “Sketches and Hints on Landscape Gardening”. Among the house’s other famous later occupiers were the bankers Sir Coutts Trotter and Charles Hambro, and Lady Elizabeth Salusbury.

Mapesbury House was part of the 300-acre estate on the northern side of Willesden Lane. A 17th century two-storeyed house was leased in 1828 to a horse dealer named William Anderson, who set up a horse training centre there. That continued as its main use until the house was demolished in 1925.

Mon Abri, No. 27 Shoot Up Hill, was the home of Senor Manuel Garcia, a renowned Victorian singing teacher and the inventor of laryngoscope, born in Madrid in 1805. Among his pupils was the famous Jenny Lind.

Having looked at some of the grander Kilburn homes, next week will bring us to the growth of the local area and its community from Victorian times into the early 20th century. I hope you will join me again then.