The full webcast can be found HERE

The evidence for a Tweet I sent out during this afternoon's Extraordinary Meeting is Cllr Butt's speech at the meeting is in the video above.  This is what I said: 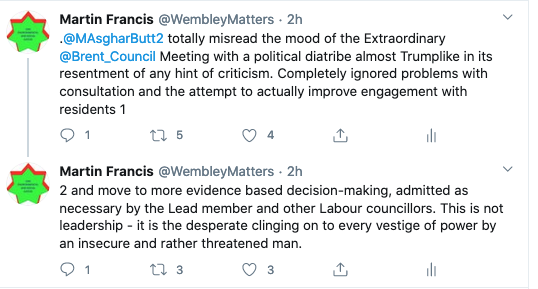 Although the re-emergence of ex Right-wing Tory councillor Joel Davidson in the guise of the Park Residents Association representative was undoubtedly annoying ,I think the real targets of his rage were the six (or was it 7 - accounts vary) Labour councillors who requisitioned the Extraordinary Meeting and had the audacity to try and have an actual debate in the Council. How dare they try and introduce a slither of democracy into the Council Chamber.  The same goes of course for Councillor Anton Georgiou who really gets up Butt's nose, especially as he is gaining much support in his ward.

If Butt's record of dealing with anyone who shows a smidgen of independence is anything to go by we may have to set up a campaign to 'Save the Brent Six' (or Seven). Some people on social media, following the acceptance of the amendment, have already sugegsted they have been 'got at'.

It was fairly clear that not all councillors have much experience of debating but as one councillor said afterwards, 'If we do more of it, we will get better'.

You can listen to the the full meeting on the link above but here are two contributions worth reading although publication does not equal endorsement.

I speak as a representative of Brent Cycling Campaign, a campaign to enable active travel, cycling and walking and as a local resident.

I also speak as a voice for the many local residents that regularly approach us. They express they WANT their neighbourhoods to be healthy low traffic neighbourhoods. With fewer cars on the road during the early lockdown months, people saw what was possible.

So I thank Brent Council for introducing low traffic neighbourhoods (LTNs) during these difficult times. Residents are telling us they want to see these LTNs become fully operational, and they want more LTNs, and they ask us to push the council to do so.

I will now address (1) the consultation process, (2) the urgency, (3) it’s a question of social justice, and (4) the strategic vision.

1. The process. Some have raised concerns about lack of consultation.
Well, the usual pre-consultation method was not working. Proposals may not be plainly obvious to residents when appearing in technical drawings and writing. And however it’s communicated, the actual effects and benefits cannot be realised that way.

Consultations generally get got low engagement, with the louder voices resulting in a very weak compromise, or just giving up and keeping the status quo. Trialling schemes are a natural means to experiment, demonstrating in real life, with sufficient time for people to adapt and see the benefits. Adjustments can still be made during the trial.

2. The urgency. Perhaps you’re thinking: We’ve got a pandemic on. So why the urgency to enable alternatives to cars right now? Well, Brent, with lots of public transport connections, is highly dependent on public transport. But we’re told to avoid public transport as much as possible. So how can people get around?

Half of households in Brent have at lest one car. So I address this in two halves. First, those who have a car. We’re already around pre-lockdown traffic levels. After furlough ends, car use will climb much higher, while public transport continues to be restricted. Road gridlock will quickly become more severe.

And now, the half of Brent residents that do NOT have a car. They’re much more dependent on public transport This is very much the poorer half. Brent has amongst the worst levels of pollution. The polluted areas are also poorer areas. Brent has amongst the highest rates of obesity and diabetes, linked with inactivity and poverty.

So now on point 3. It’s a matter of social justice that everyone should be enabled to get around their local neighbourhood safely and participate in their local communities as vibrantly as anyone else.

By LTNs restricting rat-running, it leads to our neighbourhoods and inside our homes having better air quality, in quiet pleasant healthier neighbourhoods. Older people, disabled people, children, vulnerable people, those that are less mobile, whatever their background, everyone, can more easily roam and make better use of their surroundings. The neighbourhood becomes more of a community space to engage with our neighbours.

A month ago, I attended a local street meeting on Glendale Gardens road. It was only feasible to safely use this space while the barriers were in place preventing through-traffic.

4. The vision: And while our love grows for LTNs, they’re only part of the solution. People need to be able to travel from their Healthy Low Traffic Neighbourhoods to low traffic town centres and other destinations.

Protected cycle lanes on main roads, provide the connectors. Altogether this creates an environment that truly enables active travel.It leads to attractive scenes such as children cycling in safety to school.

More women cycling, people whatever their background, age or ability, cycling because their local environment has been made safe and inviting for them to.

But they’re not just attractive nice things to see. They’re real people for whom simple changes to their environment has enabled them to lead lifestyles that enhance their physical health and mental health and by switching to avoid using cars, or using cars less, they are reducing the negative impact of cars on others, improving air quality, making the roads safer. And reducing congestion – which in turn also makes it easier for those that are unable to avoid using their cars

The urgency and for the sake of the residents of Brent, the calling is now for progressive active travel.

I thank you for listening. I will conclude with the following point: While the pandemic has made this a memorable moment, let’s craft it so that in future years, the residents of Brent will look back and say, those were the councillors that gave us a healthier neighbourhood.

I am a Liberal Democrat, but first and foremost, I hope like many in this meeting, I am an environmentalist.

I care deeply and passionately about addressing the number one crisis we all face, the climate emergency.

I was proud to see Brent declare a climate emergency last year. But declaring one isn't enough, what is needed to clean the air we breathe, is action.

We must change the way we travel. No doubt, discouraging car use and freeing up our road space for pedestrians and making them safer for more active travel options like cycling is one way - so is pushing for more affordable public transport.

However, the reason for this meeting today is the process by which this adminstration has chosen to follow to get us where we are.

The implemention of Low Traffic Neighbourhoods without thorough consultation both with residnts and key stakeholders, who are experts on this topic, has left many angry and I fear has taken us backwards, Rather than taking residents forwards on a journey of change, this administration has done us harm.

I'm also concerned about the disregard of local Councillors' views and opinions and the shoddy way that we as elected members have been treated. I'm sure the Lead member, Cllr Tatler, will attest to the fact that throughout this process I have sought to engage with her directly and officers to understand what measures they would implement, An example of the poor communication - I emailed the Lead member in August to request an update on a follow up meeting, and changes that might impact Alperton, this was only replied to on Monday October 12th at 1:28am.

The secretive, closed way that this administration and the Lead member have acted speak to a much wider problem with the culture of the leadership. They do not want to be scrutinised, they do not want to listen, they just want us all to accept their way.

I propose that we urgently set up a Taskforce made up of backbench counillors across this chamber to oversee the next phase of this project and start doing the proper outreach with residents and stakeholders, so that we can get in place the right measures, that will make the most sense, and will lead to what I hope we all want to see, the start of a shift in attitude by all, in the way we travel.

Only then will we begin to tackle the great challenge we face, the climate crisis.

Cllr Tatler, Lead member responding to the debate said that there was no perfect solution to the climate emergency - none wuld be pain-free. We are consuming resources at a rate that cannot be sustained.  The Healthy Neighbood schemes were the first opportunity for the Council to make a positive impact through testing a range of experimental schemes to unclog our roads. The Council will incorporate successful measures into their eventual scheme - the ones currently running are not the final resolution of the issues.

The amended  motion was passed with no votes against. The Conservatives abstained stating that they would have voted for the motion without the amendment. (Motions in post below)

At last some really articulate opposition to Butt! Hopefully this marks the beginning of the end for him and his cronies....the ridiculous over-development has gone way too far and all us residents know it, but have found no mouthpiece until now. Let's hope some more of the Labour Councillors stand up to this dictatorship instead of following the lead of this weak and failing administration.

The evidence behind the positive environmental effects of the Healthy Neighborhoods Scheme is unassailable, as demonstrated by many of the interventions. What Brent Council leadership never seems to get is that you have to bring residents with you, engaging with them and explaining the logic of these necessary measures well in advance.

The strain of more than eight years of total power has taken its toll on the Leader.

Just look at the faces of some of his colleagues as he does his usual diatribe against the Tories and Lib Dems (who haven't been part of the government since 2015), but can't address the subject they are supposed to be debating. Those faces say he's lost it.

For his own good, as well as Brent's, Mo Butt should stand down.