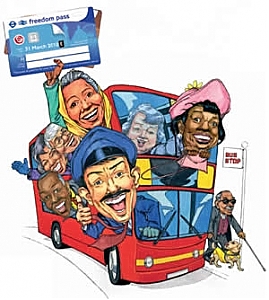 Image from Transport For All

In a matter of days we will find out if Freedom Pass and 60+ Oyster card concessions will be further reduced or even cut entirely. You may have seen the story in the news as part of the coverage around conditions attached to the next funding deal between the government and Transport for London.

We started the campaign to protect older Londoners' travel concessions back in June but the next few days are vital. The government need to know the impact that this will have and they need to hear from those most affected. We have until 31 October to stand up for older Londoners and keep transport affordable.

Click here to email the Secretary of State for Transport, Grant Shapps MP.

Affordable transform is not a luxury it's a lifeline and can transform lives. Taking travel concessions away from older Londoners who live in the city with the worst pensioner poverty rate in the country and some of the highest living costs in the world will drive up poverty and exacerbate the capital’s social isolation crisis.

Once you send your email (which you can personalise) you will see an option to share the campaign on Facebook or Twitter. You can also forward this email on to all those that may be interested. We need to get as many people emailing the Secretary of State as possible.

We are very concerned that the 60+ Oyster card may be most at risk. If you are a 60+ Oyster holder or know someone that is, it is particularly important to be heard.

Time is against us. The next funding deal will be announced by 31st October. Now more than ever, let's raise our voices!

Thank you for your support,

P.S. Here is a powerful case study from Deborah, a 60+ Oyster card holder who told us her story earlier this week.