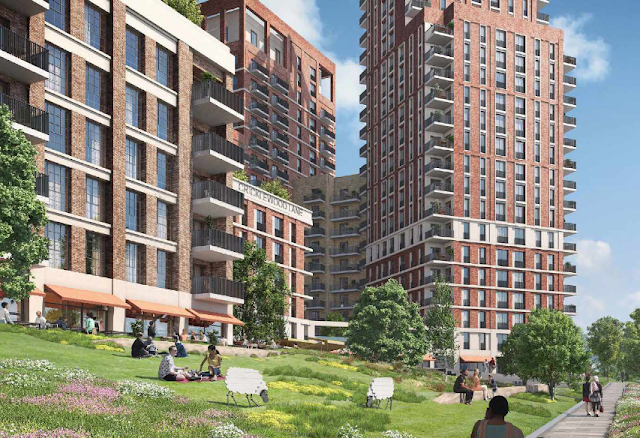 Beware of the tendency to cut off height in development illustrations 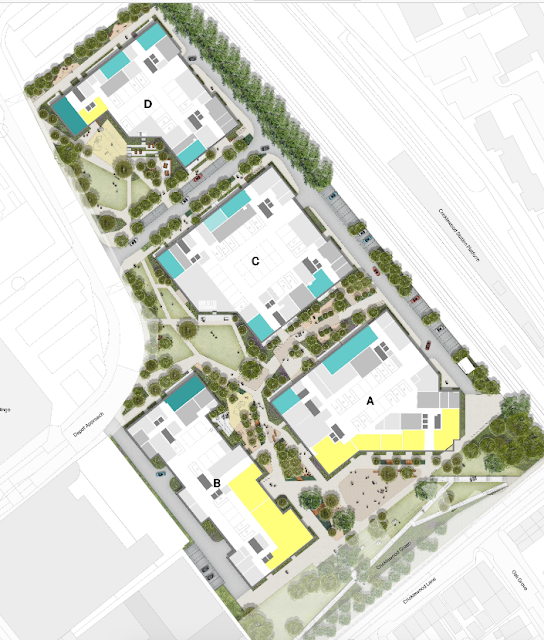 An idea of the footprint 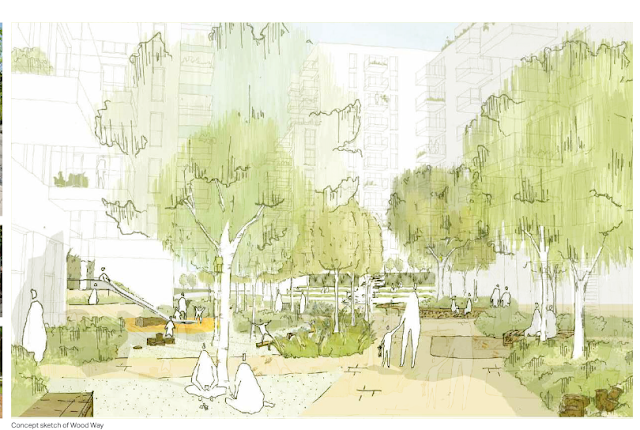 We strongly object to this planning application. Many of our reasons have already been well expressed by our fellow residents’ associations, our individual members and many others; we won’t repeat them all.

We note that much of the application is speculative, conditional and non-committal (“should be provided”, “should be designed”). It avoids saying that things will be done in accordance with the application, and the only assurances are that the development will be a fine thing for Cricklewood. These assurances are not well-founded and only bolster the impression that this developer is not committed to the project.

The application seeks to justify excessive height, massing and density by claiming the proposal solves trivial or non-existent problems.

Repeatedly, the 25-storey tower is described as an aid to wayfinding and legibility. No evidence is presented that people are having trouble finding their way. Central Cricklewood is highly legible with one main road, the A5, and one significant crossroads leading to Cricklewood Station on one side and Willesden Green Station on the other. Finding the way from Cricklewood Station is helped by Legible London signage and if finding the station were a problem, more signs could be provided. They would be cheaper and far less obtrusive than a 25-storey tower block. All this self-serving justification does is emphasise how starkly visible the development would be from all around.

The application makes much of providing a public pedestrian and cycling route between Depot Approach and Cricklewood Lane.

– It would not serve pedestrians coming to or from the Railway Terraces via Kara Way; that route is already blocked at Kara Way.

– It would not serve cyclists travelling between Cricklewood Lane and the A5 junction with Depot Approach. The concept fails to meet Transport for London’s London Cycling Design Standards. Diverting off straight roads to cycle up and down sharp inclines and in amongst pedestrians fails to satisfy the core outcomes of directness, comfort, coherence and adaptability to increasing volumes, and breaches the principle that bicycles must be treated as vehicles, not pedestrians.

– It would bring pedestrians and cyclists into conflict with each other.

– The traffic and transport sections of the application make no attempt to evaluate likely use or benefits of this feature.

A pedestrian route would have to be provided so residents of the development can move around it, and it cannot reasonably be gated. It’s not a community benefit and declaring it a cycle route only benefits the applicant.

The application criticises Cricklewood for not having a library or a town hall, but does not say it will rectify this or offer any other community facilities, with the exception of public access to the spaces between building plots. It calls one of these spaces a Town Square, though it would sit apart from the roads, and shows it with a brightly lit cinema or advertising screen shining into the windows of the residents across Cricklewood Lane (no assessment of this impact is offered).

The developers have no clear ideas on how the ground-floor commercial spaces would be used, and no strategy for encouraging appropriate uses, let alone allocation to develop the community. There is no policy to ensure they are let and do not remain empty as at nearby Fellows Square.

No social housing is offered and there is only an “aspiration” to provide the minimum of 35% “affordable” units. This fails to meet London’s needs and it fails to meet the needs of our community. The application should be rejected for this reason alone.

The open space in the development is not commensurate with the increase in population, which would increase demand on existing and prospective open spaces. The application avoids quantifying this.

The impact of the development on its surroundings would be significant and adverse, as the report from Montague Evans states repeatedly. That report hopes that good design might somewhat mitigate the significant adverse impacts. This does not address the fundamental problem.

Whether 15-storey or 25-storey, these blocks are not appropriate for this area. The tallest buildings around or in process of gaining approval are 9-storey, and they are the exception. Most of the entire neighbourhood is 2-storey or 3-storey. Not even the blocks of Brent Cross South, at some distance, are so high. These blocks would dominate the area. They would be overbearing, far too high and excessively massive. They would be detrimental to the neighbourhood and incoherent with it. Barnet, Brent and Camden still have no joint plan or co-ordinated approach to Cricklewood’s development, but it is clear that there is no prospect of similar development in the Brent and Camden parts of central Cricklewood.

The application states “There will be significant changes to some local views as a result of the regeneration of the Site. These changes and the visibility of the tallest elements on the Site signal the regeneration of the Site and the positive changes brought to the neighbourhood in returning the Site back into active use.” The current residents of Cricklewood and anyone that comes to live on the site would have to live with the permanent changes this development would make and their direct and lasting impact on our lives. These tower blocks cannot be justified by being called a “signal”.

NW2 residents association chat shit - they, ‘do not consult Cricklewood residents views will be taken into account’ and is effectively just a labour front group. They care absolutely nothing about traffic as also last week they were celebrating the historic building opposite chichele road being knocked down to double the size of the road.

The reality of cricklewood is that there is nowhere to chill away from the road and the developers are offering an actual town square in keeping with the popular granary square in kings cross with spaces for bars, cafes and restaurants that are severely lacking in cricklewood. If this comes with tower blocks next to a railway on an old industrial area of cricklewood so be it. Stop being such snobs about tower blocks, many of these moaners would have stayed in similar on holiday and people have to live somewhere. Imo the increased footfall from the houses will make the area safer and increase vitality of the town so they can crack on.

I agree that this "urban design speak" about tall buildings being justified as assisting wayfinding is nonsense.

The same line was used as part of the justification for a nine storey block of flats above the proposed new adult education college at 1 Morland Gardens in Stonebridge:
'The location of the tallest tower on the junction of Hillside and Brentfield
Road will mark this key intersection and aid with wayfinding to the further education college.'

It is an insult to the students who use the college, to suggest that they could not find their way to it if there was not a tall building above it!