Church End, in the Parish of Willesden, has grown from a small medieval hamlet surrounding the church of St. Mary, Willesden. The main routes to other parts of the Parish converge here. Church Road, leading to Harlesden, meets Neasden Lane (to Neasden!), and Willesden Lane (later the High Road) to Willesden Green and Kilburn. 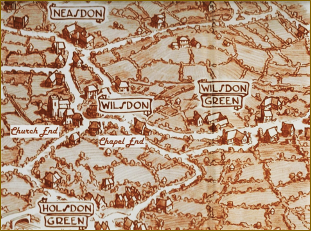 Other villages in Willesden (“the hill of the spring”), such as Neasden (“the nose-shaped hill”), Oxgate, and Harlesden (“Herewulf’s farm”), date from the Anglo-Saxon period, and were already established settlements at the time of the Norman Conquest. Willesden and Harlesden are mentioned in the “Domesday Book”, commissioned by King William I in AD1086, to record all his newly acquired lands, and the tithes, or taxes, due to be paid.

2.    A copy of the entry for Willesden in the Domesday Book. (From “Brent: A Pictorial History” by Len Snow)
There is no mention of any church in the Domesday survey. The reason could be that Willesden lands were already under the control of St. Paul’s Cathedral, at Ludgate Hill in the City of London. St. Paul’s had been gifted the Willesden lands in late Anglo-Saxon times, and now “farmed” them. Farming, in the medieval period, also meant the collecting of tithes (one tenth of the income and produce of land that was owned), to provide the monks and Canons of the Cathedral (‘canonici S. pauli’) with their food and living expenses.

The tithes collected would not appear on King William’s list, nor would most churches, as they did not pay any taxes. There could have been a small wooden Saxon church on the site at Church End, a base for the priests who would minister to the 300 or so parishioners of Willesden at the time. However, there is no documentary evidence to prove it.

What is a matter of record is that a small rectangular stone church was built by AD1181, when an “Inquistion,” or visitation, from St. Paul’s records the church and its contents. The church had been built on the rising land to the east of the marshy ground bordering the River Brent, and fed by the Mitchell and Harlesden Brooks. It was soon increased in size, by around AD1200, when side aisles and a tower were added to the original structure, and was known as St Mary’s Church by 1280. 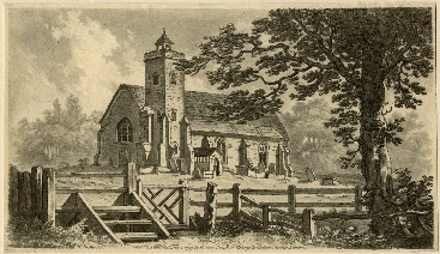 Willesden is rich in sand, gravel, clay and flint, like many places in the Thames Valley, but has no building stone. The loads of ragstone used in the construction of the church must have been brought for some distance, probably from Kent. The stone could have been shipped up the Thames, and then hauled up the River Brent from Brentford, on flat-bottomed rafts. Ingenious engineers of the time could have dammed off sections of the Brent to form ponds to make their task easier - unfortunately this is just conjecture!

The 800-year history of St. Mary’s has been well documented (though not online) by our best local historians. Suffice it to say here that the church has weathered storms, wars, plagues, famines, times of social turmoil, pilgrimages, the depredations of Henry VIII, neglect, restorations, and calls for its demolition. It still stands firmly on its plot, surrounded by the churchyard which is the resting place of untold thousands of Willesden people.

In 1830, the author Harrison Ainsworth, who lived at Kensal Manor, on the Harrow Road, described Church End as: “A very retired little village, with its church, rectory and vicarage, and about twenty cottages, housing , among  others, a bricklayer, a butcher and a general dealer; also a group of wooden poorhouse dwellings in the churchyard.”  Ainsworth used Willesden and its church as the setting for his novel about the 18th century highwayman, Jack Sheppard. His “very retired little village” was to go through great changes as the century progressed.

4.    Jack Sheppard, thieving in the church, arrested in the churchyard and escaping from the Round House.
(Illustrations by George Cruikshank from Ainsworth’s 1839 novel “Jack Sheppard”: Brent Archives no, 1696/97/98)

The opening of the Paddington Arm of the Grand Union Canal, across the fields to the south of Willesden, in 1801, brought new transport opportunities to the area, and industries such as brickworks, gasworks, and rubbish removal appeared alongside the canal. The Great Western, and London to Birmingham Railways appeared, again to the south of Willesden, in 1838. The first railway to be built across Church End was the Acton branch of the Midland and South Western Junction Railway in 1868, which cut off the village from the farmland to the north.

Chapel End came into being when a brick chapel was built by non-conformist villagers in 1820. This was to the east of the Church End settlement, at the corner of Willesden Lane and Dudden Hill Lane. The name “Chapel End” was soon in use, and the residents felt themselves to be different from the people of Church End. A few years later the name “Queenstown” was also used, supposedly commemorating a visit by Queen Victoria. There does not seem to be any record of such a visit, so perhaps it was simply an attempt to commemorate Victoria’s Accession in 1837! 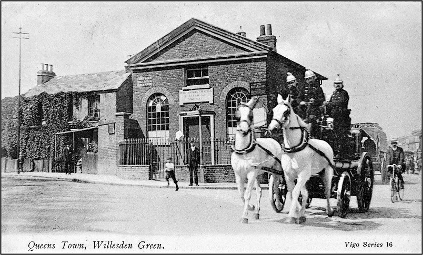 The Queens Town name was used well into the 20th century. The small original chapel, at the Dudden Hill Lane corner, was replaced around 1890 by a much larger Congregational Chapel, on the corner opposite Pound Lane, of the soon to be renamed Willesden High Road. The old chapel was used as a Sunday School, then demolished for road-widening in 1908. 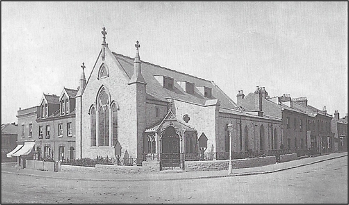 During the 19th century, people were attracted to Church End and Chapel End to find work, and needed somewhere to live. In 1810 the ownership of land in Willesden, and legal boundaries, were finally settled by the passing of an Act of Inclosure.  Landowners began to see the profit which could be made by selling off acres of farmland to developers for building houses.

The land at Church End was part of the old Manor of Willesden’s Rectory Estate. John Nicoll of Neasden had purchased this Estate back in 1738, and after passing through several hands in the early 19th Century, it was sold to The United Land Company, in 1869. In the same year, the company bought some land at Chapel End from the daughters of James Henry Read, who had died. This would later become the Meyrick Road estate. “Land for Sale” notices began to appear in the district, and developers and builders purchased plots at auction. 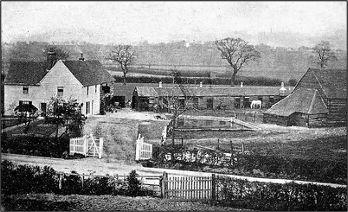 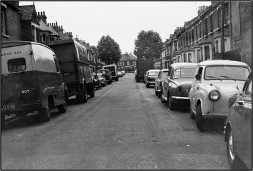 8.     Beaconsfield Road, Chapel End, 1960. (Brent Archives online image 2570)
Nine acres at Church End Paddocks were sold in 1873, then Church Farm Estate went up for sale in 1875. This consisted of 4 acres next to the White Horse, and became the Cobbold Road estate. Roads and building plots were also laid out at Beaconsfield Road. House building on The United Land Company’s estates was finished by the mid-1890s. Southward expansion from Chapel End was prevented by the opening of the Jewish Cemetery (1873), and Willesden New Cemetery in 1893, because St Mary’s churchyard was no longer large enough. 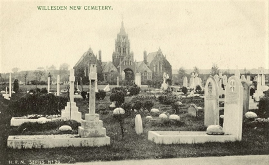 9.     Willesden New Cemetery, early 20th century postcard. (Brent Archives online image 7255)
To the disappointment of the directors of The United Land Company, Church End and Chapel End did not provide them with big profits. Their stated aim was to build first-class estates which would attract investors, but the plots of land were small in size, so small houses were built, and the area became working-class. It was Church End Ward that elected the first Socialist member of Willesden Council, in 1904! The quality of the building work varied, but many of the terraces of small houses have survived into the 21st Century, and have stood up well to being modernised and extended.

Amenities such as shops and laundries flourished, especially along Church Road and Willesden High Road. Other buildings such as public houses, meeting rooms, schools and cinemas were put in place alongside the housing, and some of these landmarks have survived to the present day, while others live on in people’s memories. We will explore these landmarks in Part 2, next weekend.