Grunwick strike: Film of 'We are the Lions Mr Manager' available on-line for limited period. 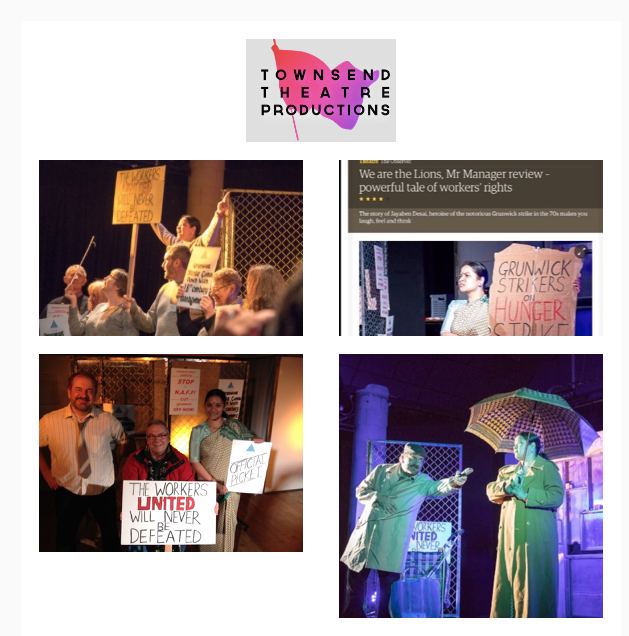 
You can be the first to see our film of edited archive footage of the production 'We are the Lions, Mr. Manager! touring  2017-18/ filmed at TARA Theatre, Earlsfield, London in November 2017.
To view film click link:  https://youtu.be/emDZYCbX_Eg  The film will be available for one month ONLY until 6th AUGUST.  Please click icon on bottom right that says cc for Subtitles.
If you enjoy the film please make a DONATION via our donate pop up or our Support Us page on our website: http://townsendproductions.org.uk

A suggested donation would be £3 which would help the company through these difficult times. Many thanks, and we hope very much you enjoy the film. Please keep an eye on our website for more online offerings coming soon, while we're not currently able to tour.

The Grunwick Strike of 1976 to 1978 wasn’t a strike about wages – it was about something much more important than that: it was about dignity. Dignity at work. Newly arrived immigrant workers were employed by the Grunwick film processing factory in North London in the belief that they would be easy to handle, to browbeat and to exploit. Yet, they found their own distinctive voice in the course of the struggle to secure their rights. Each morning the strikers, a group of predominantly Asian women led by Jayaben Desai, in colourful saris often hidden beneath heavy woollen coats, would take up their posts on the picket lines, unbowed and unbroken in the face of intimidation, the threat of arrest and the sting of the cold. Even during the hardest of times, Jayaben Desai had the uncanny ability to evoke a mood or sum up a situation with a perfectly weighted turn of phrase and a way and with words that captured the very essence of the human spirit. She had the measure of the most brutish and charmless of her managers, when she told them: ‘What you are running here is not a factory, it is a zoo. But in a zoo there are many types of animals. Some are monkeys who dance on your fingertips, others are lions who can bite your head off. We are the lions, Mr. Manager!’
Grunwick truly did make history: it focused the issue of the exploitation of immigrant workers, nailed the myth that Asian workers were passive and unorganisable and defined the trade union and political lives of tens of thousands from across the nation who came to the streets of Willesden to back the Grunwick workers. Grunwick was a defeat. But a struggle like Grunwick cannot be considered a total loss. It illustrated how a section of totally unorganised workers, ignorant of trade unionism and insecure in a foreign land can yet develop militancy and attract huge solidarity. It showed too that all the forces of the state, the monied, the media, the police, the courts, employers, racial prejudice and women’s inequality can be swept aside by the freshness and dynamism of determined struggle. Grunwick is still posing questions to today’s generation about the role in society of women, workers and immigrants. And the strike still carries a challenging message about the need for human dignity.
The play was written by Neil Gore, directed by Louise Townsend and features Medhavi Patel as Jayaben Desai and Neil Gore as almost everybody else.
COMING SOON! - Podcast of 'Dare Devil Rides To Jarama' & a documentary film of interviews made with Shipbuilding communities across the UK.
The script is available to buy from Stagescripts:
http://shop.stagescripts.com/categories/plays/mid-length/drama/we-are-the-lions-mr-manager.html