The final part of this local history series by Margaret Pratt. (Thank you very much for this series Margaret which has aroused a lot of interest.  I hope to publish more about the history of our various Brent communities)

Last week, in Part 2, we looked at local landmark buildings, many from the 19th century. In this final part we move to the 20th century, especially the industrial development of the area.
Before the First World War, Church End and Chapel End had many small workshops and businesses which depended on the reliance on horse power, in agriculture, and in everyday life in the village. Stablemen, grooms, blacksmiths and farriers, suppliers of horse-drawn vehicles, saddles and tack were all living and working in the area. Gradually the horse was overtaken by the motor vehicle, and businesses had to adapt.

Many coachbuilders and blacksmiths reinvented themselves and opened garages and motor engineering works, using the skills they had already learned. Other small-scale industries included stonemasons, sawmills, cycle makers, shoemakers, and printers, who were established in the area from the 1880s onwards. 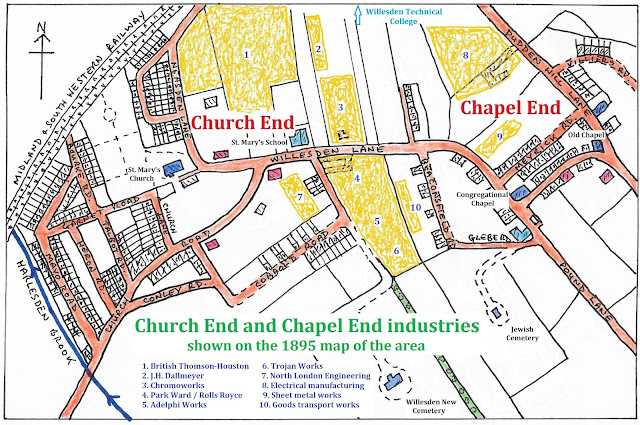 1. 20th century industrial developments, added to a sketch map of the district based on the 1895 O.S. map.
Church End had large areas of land which had not been sold for housebuilding, unlike Willesden Green (where terraces of small houses filled most of the farmland). These local fields were opened up by companies such as British Thomson-Houston, the electrical engineering firm. In 1913 BTH built its workshops on the cricket field, north of St. Mary’s vicarage, starting the area’s industrialisation. This continued after the war, when jobs for the returning soldiers were in short supply, and large-scale industries began to fill the gaps.

British Thomson-Houston was a subsidiary of the American General Electric Company. They had opened a factory in Rugby in 1899, making electric lamps, turbines and electrical systems. Their Willesden plant specialised in switch-gear equipment, (a collection of circuit breakers, fuses and switches, needed to control electrical systems). By 1919 it employed 462 people. 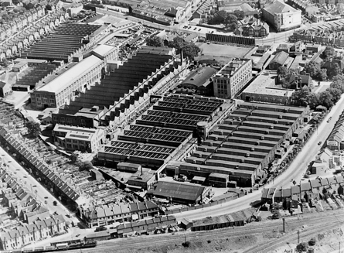 Before and during the Second World War, the factory diversified, producing lighting, radio and signalling equipment for the Royal Navy, and helping the RAF’s success in the Battle of Britain with their magnetos, compressors and starting switches. In 1949, around 2,000 people were working at its Church End factory.

3. Two scenes from the Dallmeyer optical works, c.1910. (Brent Archives online images 2711 and 2718)
J.H. Dallmeyer, makers of optical instruments and precision lenses, was founded by a German immigrant in 1860. The company first came to Denzil Road, Church End, from Central London in 1907, moving to Willesden High Road in 1920, and building extensions to their works in 1945 and 1952. By 1979 the business employed around 90 people, manufacturing high-precision optical products, hopefully in more comfortable conditions than in the early years! It was taken over by a larger company in the 1980s, but Dallmeyer lenses are still highly collectable.

4. A Dallmeyer advertisement for one of their photographic lenses, 1914. (Image from the internet)

Next to Dallmeyers was Chromoworks, high class printers and lithographers. The lithographers had an unusual assignment after World War Two. The Directors of Lyons Tea Shops wanted to spruce up their premises, but decorating materials were in short supply. They commissioned famous artists to produce paintings of post-war Britain, to be made into poster-sized prints, at Chromoworks.

The prints were large enough to cover as much of the shabby decor as possible. Three series of prints were produced, from work by Lowry, John Piper, Edward Bawden, John Nash, and many others, 40 artists in all. The scheme was a great success, and the prints appeared in Lyons tea shops all over Britain. They were also on sale to the public, and provided Chromoworks with plenty of work from 1946 to 1955. The prints are still collectors’ items, and have been shown in art exhibitions.

5. A Lyons Tea Shop with prints on its walls, and a lithograph of Shopping in Mysore by Edward      Ardizzone. (Images from the internet - © the Towner Collection)

The land occupied by Church End Paddocks was purchased by Messrs Park and Ward, in 1919, for their Park Ward coachbuilding business. Despite Henry Ford’s assembly line method for making motor cars in America, many British cars, especially for wealthy drivers, were still built to individual designs on a manufacturer’s chassis. Below are before and after views, showing a drophead coupé sports car built on an MG chassis at the Park Ward works in 1936.  In 1939, the business was sold to Rolls Royce, who had been a major customer. It traded as their Mulliner Park Ward Division, an important employer in Willesden until the 1980s.

6. Before and after photographs, showing the coachbuilding skills of Park Ward, 1936. (Images from internet)

On the Cobbold Estate with Rolls Royce were several other manufacturing concerns. The Adelphi Works, of Heaton Tabb & Co, were famous for luxury decorating and furnishing, used in passenger liners, hotels and restaurants. Nearby were the Trojan Works, and the North London Engineering Company, producing bus and heavy goods vehicle bodies. 7. A Heaton Tabb advertisement from 1936, listing Willesden as one of their workshops. (From the internet)

With the need for local skilled workers, Willesden Technical College opened in 1934 at Denzil Road, off Dudden Hill Lane. The College provided courses formerly taught at the Polytechnic in Kilburn, and also included courses in art and building. In 1964, the College took over the buildings of Dudden Hill Lane school, on the corner of Cooper Road, one of Willesden's wonderful three-decker Board Schools, built in the early 20th century.

The sites became part of the College of North West London in 1991. The new Telford building, in Denzil Road, opened in 2009. The Edison building in Dudden Hill Lane was demolished in 2015, now replaced by state-of-the-art facilities for technology education, from access courses, BTECH and GCSE, to foundation degrees and other Higher Education qualifications. Around 8000 students presently attend courses there. 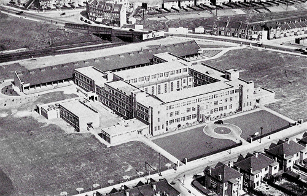 8. An aerial view of Willesden Technical College, Denzil Road, 1930s. (From “The Willesden Survey – 1949”)
Cliff Wadsworth, a Willesden local history expert, attended 'The Tech' between 1951 and 1954. He remembers that his walk to Denzil Road in the morning was accompanied by the sound of a blacksmith’s hammer, clanging away in the smithy on Dudden Hill. How times have changed!


Church End was one of four Willesden districts where heavy industry was prevalent. The others were Park Royal, Cricklewood and Kilburn. By 1936, Church End was almost wholly industrial. In 1937, Willesden as a whole was described as “the largest manufacturing borough in Britain.” 14% of Willesden’s population were employed at Church End and Chapel End by 1939. 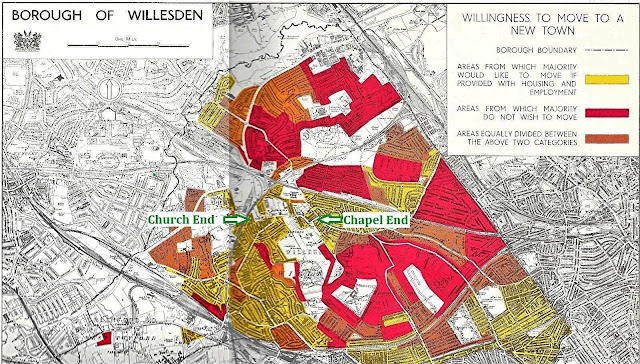 9. Map showing where in Willesden people were willing to move from to a New Town. (Willesden Survey 1949)

After the war, the Greater London Plan of 1950 recognised the over-industrialisation and poor housing conditions of areas such as Church End and Chapel End. It proposed moving some firms and their employees to a New Town, being developed at Hemel Hempstead. The Willesden Survey of 1949 had found that 49% of Willesden’s entire population would be willing to move immediately (36% out of London), if housing and employment were available. They would expect wages of at least £5 per week, wanted a 3-bedroom house (preferably detached) and expected to pay rent of between £1 and 24 shillings a week for this. 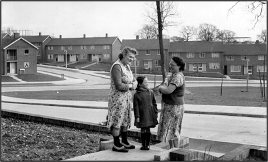 10. Two ladies (from Willesden?) chatting in Hemel Hempstead New Town, 1954. (From the internet)

Many skilled people, particularly younger workers and their families, were persuaded to move. In all, twenty-six firms, employing 5,000 workers, moved out of Willesden, including to other New Towns, such as Harlow, Stevenage and Welwyn Garden City. The vacated factory sites and workshops were given over to warehouses, retail outlets, trading area, builders merchants, and other non-manufacturing concerns.

British Thomson-Houston remained in Willesden into the 1960s, with its name changed to GEC.AEI, but was suffering from falling sales. Hansard records a speech in Parliament on 28 February 1969, by Laurie Pavitt, the MP for Willesden West:

‘I raise this matter affecting 1,100 families in my constituency, namely the proposed closure of GEC.AEI switchgear factory, Neasden Lane, Willesden. What can be done to keep it going? I am aware that the industry is facing a falling market, yet the Willesden factory managed to increase its share from 10% to15%, in 1968. There should be recognition for their efforts. The problem is that there have been 5,187 redundancies and 37 factories in Willesden completely closed down. Many valuable teams of skilled workers will be dispersed and uprooted. This is a fine factory. It is a gem of a factory. It is an asset for the nation ....’

Sadly, even Mr. Pavitt's eloquence could not prevent the factory’s closure in the early 1970s.

By the 1950s, the streets on the west side of Church Road, between Craven Park and Neasden Lane, were deemed fit for redevelopment. The Council purchased properties from 1963, and work began in the 1970s. Large houses at the Craven Park end were swept away first, and Church Road was widened into a dual carriageway, and carried straight on to a roundabout at the Neasden Lane junction, near St Mary's Church. The north end of Church Road remained, curving right towards the White Hart Public House. 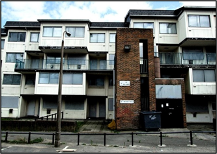 The Church End Estate was completed by 1980, as far as Talbot Road, although the flats built using the “Resiform” system (with fibreglass exterior panels) have since had to be demolished. A second wave of improvements were made in the 1990s. The estate has a mix of low-rise flats and family houses with gardens, some are privately owned, some social housing. There is a large Community Centre, sheltered accommodation for the elderly, children's playgrounds, and the modern St Mary’s Primary School in Garnet Road. Unfortunately, there is no shopping centre, so residents have to cross to the east side of Church Road, where parades of small shops have survived since the late 19th century.

12. Two views of the Church End Estate, including the Unity Centre, July 2020. (Photos by Margaret Pratt)

The story continues. As the population grows, and new building continues, it is easy to forget what has gone before, to lose track of our history, and how the places we know became what they are today. I hope you’ve enjoyed uncovering the history of Church End and Chapel End.