The afternoon of Friday 24 July 1908 was hot and sunny, not the best of conditions for running 26 miles from Windsor Castle to the White City. But that was what 56 athletes from 16 different nations set out to do, at 2.33pm, for the honour of being the Olympic marathon champion. 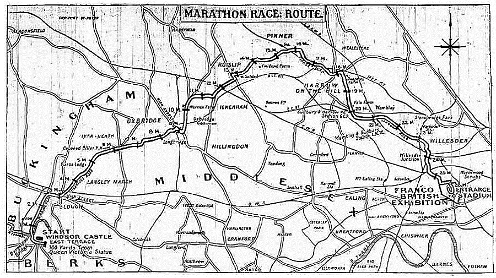 A map of the Olympic marathon course, from "The Times", July 1908. (Source: British Newspaper Library)

More than a century later, Joe Neanor, a keen runner, came across a short piece of film from 1908, showing a scene of the Olympic marathon race actually shot on the route, and not at the finish in the stadium. Being curious, he ran the whole 1908 course (in stages) to discover where the film was taken. When he had found the spot, he put together this video, and loaded it onto the internet:


After putting his video on YouTube, Joe sent Wembley History Society a link to it – watch his short film, and you will understand why! It is certainly the oldest piece of film that I am aware of showing Wembley, and the people who lived here in Edwardian times. The scene shown is at the western end of Wembley High Road, near the top of Ealing Road.

Joe was amazed at the number of people watching as the race went by. On the day after the race, “The Times” had said:

“… over all the last part of the course, when one got on to tram-lines and between rows of houses, the spectators were packed as tightly as possible, and then only leaving a part of the road open, but enough to ensure no discomfort to the competitors.‟

One reason for the crowds was probably because tickets to watch the Games in the stadium were expensive. As the Olympic marathon race was along public roads, people could watch it for free. There was no radio or television in 1908, but plenty of coverage of the events in the newspapers, which most people could afford (the “Daily Mirror” only cost a halfpenny then!). The route of the race, and expected times that the runners would arrive, had been well publicised. 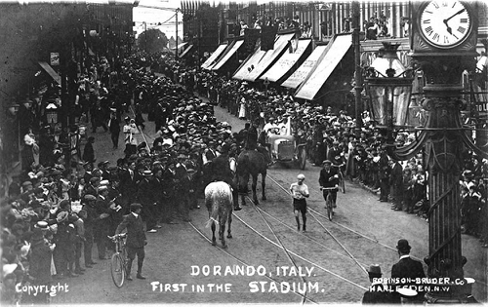 The Italian "winner" of the marathon, and crowd of spectators in Harlesden. (Brent Archives image 1034)

There is some confusion over the name of the Italian runner, seen in the video, who was ‘First in the Stadium’. I have always referred to him as Pietro Dorando, which is what the newspapers at the time called him, but the official Olympic Games records have him as Dorando Pietri. I suspect that the (all British) officials at the 1908 Games may have got his first and surnames the wrong way round!

The race at the 1908 Olympic Games was the one which really made the marathon event famous worldwide, especially because of its dramatic finish. If you don’t know the story, or want to discover more about the 1908 Olympic marathon race, details are available in the Brent Archives online local history collection (just click on the “link”).
HERE