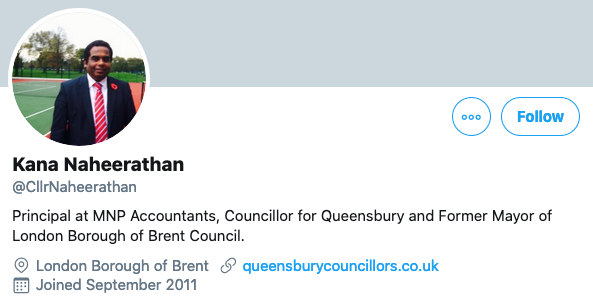 Brent councillors were probably taken aback when they received an email yesterday with the subject line 'Judgement Day for the *********** Accountant'.

The email was from S. Vigneswaran who reported on a case heard at Watford County Court and claimed that the judge 'concluded that my former accountant's conduct was "illegal" and duly entered judgement against him personally to pay my costs despite the claimant in this case being his private limited company'.

The accountant is Cllr Kanapathipillai Naheerathan (Labour, Queensbury ward) who practices, according to his Twitter account (above) as MNP Accountants ,and the dispute concerned his work for the family business 'Day One Local Express' in Kingsbury.

The colourfully worded five page email makes a series of allegations against Cllr Naheerathan and calls on Brent councillors to take action.

The new Chair of Brent Standards Committee made a light-hearted comment at Monday's Council Meeting that this was a job that seemed to be 'jinxed'. Previous chairs were Cllr Aslam Choudry and Cllr James Allie.

There is a possibility that this matter could be referred to her Committee under the Members' Code of Conduct LINK or 'Integrity' in the Seven Principles of Public Life.
Posted by Martin Francis at 11:08:00