In Part 1 we looked at the church and chapel(s) that gave these parts of Willesden their names. This time, we’ll discover more about the history of the areas by exploring the stories of some of their landmark buildings, starting with those in Church End. 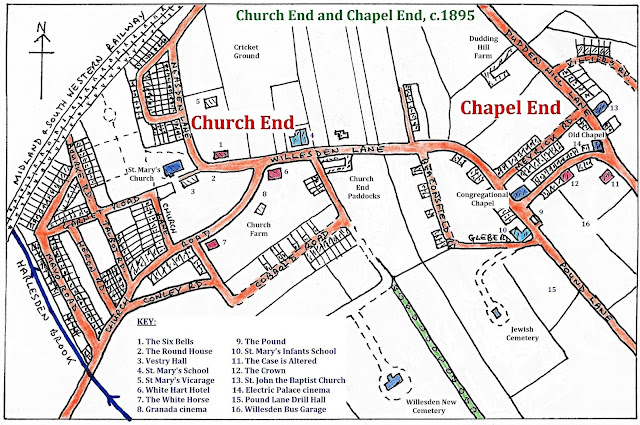 1.    A sketch map of the area, based on the 1895 O.S. map, with featured landmark buildings shown.
The “Six Bells” public house was built before 1724, and was known as the Five Bells, until the ring at St. Mary’s was augmented to six, when the name had to be changed! It later became known as The Old Six Bells. Being close to the church, it was a favourite meeting place of the Willesden Vestry members, during winter before their new Hall was built, when the church was cold. A Post Office letter box was fixed in its wall in 1870, and the pub was later converted into a shop, as seen in this photograph. The little pub has now disappeared. 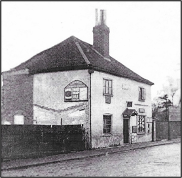 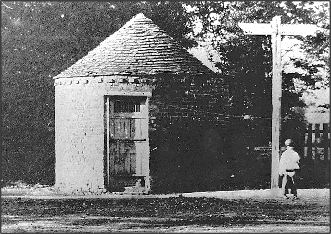 The Round House, was a “lock-up”, or “cage,” on the corner of Neasden Lane, close to the church. It was used to house criminals waiting to see the Magistrate, and is pictured in the story of Jack Sheppard, seen in Part 1. Some of the stone from the building, after it was demolished, was used in the construction of St. Mary’s School (see below). 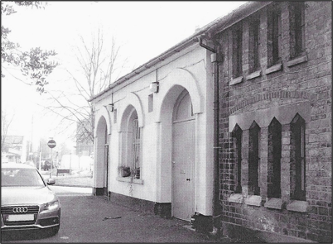 4.  The Vestry Hall, with original fire station beside it.

The Vestry Hall is a small building, that still stands by the roundabout where Neasden Lane meets Willesden High Road, near to St. Mary’s Church. It was built in 1857, when the Willesden Vestry, a parish meeting which was the forerunner of the Local Council, decided that they needed a purpose-built Hall. It would include a fireproof cupboard for the precious Vestry Minutes, and would also house the Willesden fire engine.

When the Vestry was replaced by the Willesden Local Board, in 1874, the public enquiry was held in the Vestry Hall. This quaint landmark has survived fire, has served as a nursery, and now houses the foodbank run by the Trussell Trust.

Willesden National School (St. Mary’s School) was one of the earliest schools to open in Willesden. The Vestry decided, in 1809, to establish a Sunday School for 80 children of the poor, giving them a chance to learn to read and write. The local farmers, who relied on children’s labour at certain times of the year, were less than impressed by this idea, thinking that the youngsters would get ideas “above their station”. The original Sunday School became a day-school in 1818, transferring into a new building in 1853, beside Willesden Lane (renamed Willesden High Road by 1900). It was funded by public subscription.

The School remained in use until 1972, and is fondly remembered by generations of Church End schoolchildren. The new St. Mary’s School is in Garnet Road, to the west of the Church. Willesden Magistrates’ Court is now on the site of the old school (and the Six Bells).

In 1861, a new St. Mary’s Vicarage was built in Neasden Lane, opposite the Church, and looking out over the cricket field behind. It was the latest in a long line, dating back to the 12th century, and was itself replaced by a handsome house, designed by the architect Caroe, in 1904. The Caroe house was bought by British Thomson-Houston, the electrical engineers, for use as a conference centre by their directors. A vicarage designed by Cachermaille-Day, was built in 1939 on a site next door, nearer to the corner of Neasden Lane, and surrounded by a lovely garden.

No trace of these buildings remains. The site on the corner was sold to developers in 2002, and now has a block of flats built on it. The present, much smaller vicarage was built on the opposite side of Neasden Lane, beside St. Mary’s Parish Centre (where Willesden Local History Society holds its monthly meetings, when we are not in lockdown!).

A pub was in existence at the corner of Church Road and Willesden Lane by 1749. It was first known as “The Gate”, and then “The Leather Bottle”, with the name changed to The White Hart” in 1791. In Victorian times it was famous for its pleasure garden, and was enlarged in 1882. During the next two decades, the White Hart became the headquarters of the Neasden Cycling Club, and also the Finchley Harriers (when Finchley became built up, the runners preferred the more rural lanes and fields of Willesden for their cross-country runs!) The pub was also the local horse-bus terminus. The White Hart closed in 2002, and was demolished soon after, replaced by a block of flats, with a large shop on the ground floor.

“The White Horse” public house was also in Church Road, nearer to Harlesden, at the corner with Roundwood Road. A beerhouse stood on the site by 1801, later becoming fully-licensed. In 1888, it was replaced by a larger, brick building, which was damaged during the Second World War. It was repaired, but slowly declined in popularity. The White Horse was demolished in 1998, and replaced by flats, with a Veterinary Surgery on the ground floor.

The Granada Cinema in Church Road opened in 1921, beside the industrial area of Cobbold Road. Already a large building, its seating capacity was increased to 2,000 in 1928. As “The Empire”, it was a popular venue for the whole of Willesden, with a famous cinema organ. The cinema closed in 1962, then reopened as a bingo hall. It then a became a church, and finally has been developed as flats, with the church still occupying the ground floor.

Chapel End, as well as the chapels themselves, also had a number of landmark buildings.

In 1828, the Vestry ordered the construction of a Pound, a walled area at the corner of Petticoat Stile Lane (which soon became known as Pound Lane). Following the Inclosure Act of 1810, which allowed existing landowners to divide up common land, such as Willesden Green, among themselves, ordinary people had nowhere to graze the few animals they kept. 9.  The corner of Pound Lane and the High Road, with the Pound on the right, from a drawing of around 1890.

Stray dogs, horses, donkeys and sheep were rounded up, to prevent damage to gardens and orchards. They could be confined until their owners paid a fee for their release. The fee in 1830 was fourpence a day, plus the cost of feed, and a Mr Kilby was appointed as Pound Keeper. He remained in office until 1886, when it was decided that the Pound had outlived its usefulness. It was dismantled a few years later.

St. Mary’s Infants School was a small school, for infants only. It was opened at Pound Lane in 1858, on land given by All Souls College, Oxford (important land-owners in Willesden). This building survives, and is now used by an Evangelical Church.

“The Case is Altered” public house, originally a beerhouse, was probably built in the 1850s, on a greenfield site. It was enlarged in 1877, but proved still too small for the rapidly-expanding population. A rebuild in 1887, and further expansion in 1915, provided the huge building we see today. The three-storey red brick building, opposite the junction with Dudden Hill Lane, has since been painted black, and provides hostel and bar accommodation, named “No.8.” 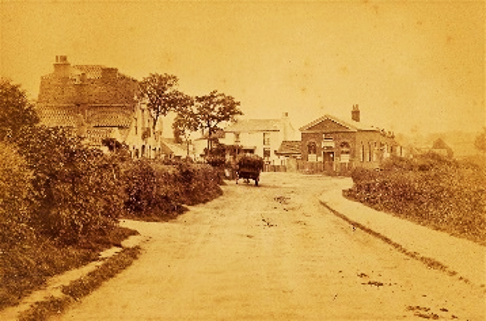 “The Crown” Public House, was built on Willesden High Road opposite the new Chapel. Enlarged in 1905, this attractive building closed for business in 2015, and still awaits a purchaser.

St.John the Baptist church, in Dudden Hill Lane,  opened in 1901, as a Mission Church of St. Andrew’s, Willesden Green. It closed as a church by 1937, and has been used since as the Brent Indian Centre, more recently named the “Sir Learie Constantine Centre,” in honour of the famous West Indian cricketer.

Willesden Green Electric Palace was a small cinema that opened next door to the first non-conformist Chapel in 1910. It was renamed “The Savoy” in 1933, and “The Metro” in 1949. The building survived until 2018, after being used as a cab office, then a church. It has now been demolished, and the site remains empty so far.

The purpose–built Pound Lane Drill Hall and training ground was opened in 1911, for military recruiting and training purposes. Col. Charles Pinkham, a local businessman and politician, organised the Willesden Defence League, which eventually became the Middlesex Volunteer Regiment. During the First World War, Pinkham raised two Battalions of the 9th Middlesex Regiment, who went to fight in Mesopotamia (now Iraq). The Drill Hall eventually became used as a working men’s hostel, Pound Lodge, which was demolished around 2013, and replaced by a St Mungo’s Hostel, of striking modern design.

In 1900, the London General Omnibus Company bought land for stables at Pound Lane. Seven horse-buses an hour were running by 1903. Horse-drawn services were withdrawn in 1911, (despite protests by locals, who did not trust the new motor buses), and the site became the present Willesden Bus Garage. The bus garage has been an important local employer for over 100 years, with 958 people working there in 1949. 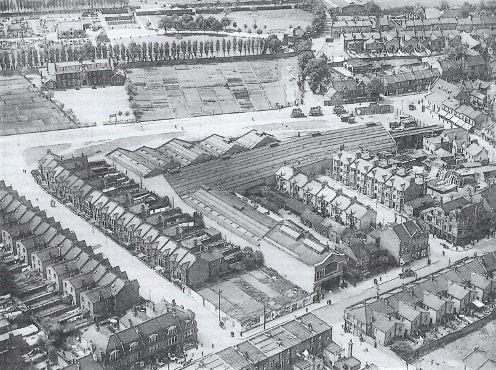 12.                 An aerial view of Willesden Bus Garage in 1921, with the Drill Hall across Pound Lane from the back of it. What other Chapel End landmark buildings can you spot in this picture?

Please join me next weekend, for the final part of this series, when we will look at some of the industries that came to Church End and Chapel End, and how local housing changed in the 20th century.