The first part of a new local history series, by Chris Coates of Preston Community Library.

Preston is often seen as one of the quieter parts of Wembley – just a 20th century development of suburban housing. This series of articles will look at some of the people, events and social changes that shaped its long history, and produced a 21st century Preston with as diverse a community as any other area of Brent. 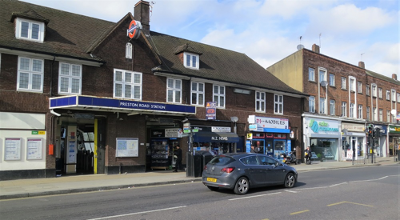 1. Preston Road and its station, part of the 20th century suburb. (Photo by Derrick J. Knight, from an internet blog)
Preston Ward’s political boundaries are a triangle formed by the apex of the Metropolitan and Bakerloo Underground lines, with Wembley Park Drive as the southern border. But Preston as a community stretches north to meet Kingsbury and Kenton and this reflects its origins as a rural area in the parish of Harrow, centred on the cluster of farms and buildings at the junction of what are now Preston Hill, Preston Road and Woodcock Hill, west of the Lidding or Wealdstone Brook. This first article looks at the early period up to 1800. 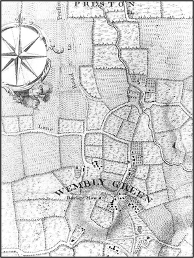 2.  John Rocque's 1744 map of London and its Environs includes Preston, and the road to it, on its northern edge!

The first definite record of Preston is in 1220, the name coming from the Old English preast and tun, meaning the farm belonging to the priest.  Preston was a township in 1231 but by the mid-15th century had only 2 farms, and a few cottages. It was linked to an even smaller settlement, Uxendon, on the east bank of the Wealdstone Brook, which was first recorded in 1257 as Woxindon, probably meaning "Wixan's Hill". The Wixan were a 7th century Saxon tribe from Lincolnshire, who came to settle in what became Middlesex.

Most local landowners accumulated property through inheritance and family connections, but Harrow from early times had also attracted London merchants and courtiers. In 1376, the Uxendon manor passed to Sir Nicholas Brembre, a powerful City of London and national figure, who owned considerable estates elsewhere. He was twice Lord Mayor of London, a customs officer for the Port of London under Geoffrey Chaucer, and a strong supporter of Richard II, knighted for accompanying him to face the rebels at Smithfield during the Peasants Revolt in 1381. 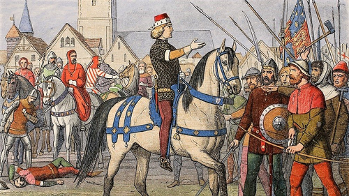 3. King Richard II speaking with the peasants at Smithfield in 1381. (Image from the internet – thanks, BBC Bitesize!)

Nicholas Brembre was Richard’s chief ally in London, but his ties to the ill-fated King ultimately resulted in his downfall. Accused by Richard’s opponents of corruption, tyranny and finally treason, he was executed in 1388 (either by hanging or beheading, it depends on which account you read!). Brembre’s confiscated properties in Uxendon and elsewhere were given to his brother-in-law, Thomas Goodlake, whence they passed by marriage in 1516 to the Bellamy family.

The Bellamy family had remained staunchly Roman Catholic after the Reformation and sheltered Catholic priests on the run. The manor house held a secret chamber under the stairs with an underground escape route to a barn nearby. A priest who died at Uxendon was buried under a pseudonym at Harrow Church. Anthony Babington, identified by security services as a principal conspirator in a plot to assassinate Elizabeth I, was arrested there in 1586 and the Bellamy family were arrested for treason. Catherine Bellamy, the mistress of Uxendon, and two of her sons died in the Tower, and a third son was executed.

A fourth son, Richard, moved to Uxendon to take over the estate, but the family continued to be investigated and in 1592, while imprisoned, his daughter betrayed the presence of a Jesuit priest, Robert Southwell, in the manor. He was arrested and executed.

4. Robert Southwell, Jesuit priest and poet. (Image from the internet)

The family continued to be prosecuted and imprisoned over the next 10 years until Richard Bellamy relented and conformed. The estate, now over-mortgaged to pay recurrent fines, was sold to another local family with Catholic sympathies, the Pages, who had become leading landowners in the Wembley area. Two priests from the wider Page family in Middlesex were also executed.  When a special tax was raised in 1642 to ‘meet the distress of the Army and people in the Northern parts’, Catholics and aliens were required to pay double – but none were found in Harrow.

From the late 14th century, the northern farm on Preston Hill [then known as Clay Lane] belonged to the Lyon family and one of the most notable residents from the early period was John Lyon, 1514-1592, the founder of Harrow School. He was a man of considerable wealth, owning land in Hertfordshire, Bedfordshire, Marylebone and Essex. He was active in local affairs and had good political connections – despite managing to stay on good terms with his troubled neighbours, the Bellamys. 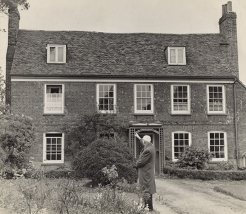 John Lyon was also a philanthropist and was already paying for the education of 30 poor local boys when in 1572, possibly through his friendship with Elizabeth I’s Attorney-General, he obtained a Royal Charter for the foundation of a free grammar school. He wrote precise detailed instructions about how the School should be administered, even down to what games the boys could play! – and no girls were to be admitted.

Lyon ruled that the poorest applicants should be preferred for entry to the school – but as parents had to provide books, writing materials and candles, as well as ensuring children were well-dressed – most of the rural poor of Wembley and Harrow must have been ruled out! However, the schoolmaster could accept enough fee-paying boys from outside the area to provide his own wages. In time, those students became the majority, changing the nature of the School and thwarting Lyon’s original intentions

6. A memorial to John Lyon, and a brass commemorating John and Joan Lyon, in St Mary’s Church, Harrow.
(Both images from the internet)

Lyon left his house and lands as an endowment for the foundation and upkeep of the School, plus scholarships for 4 boys to go on to university - though the provisions of the will did not become operative until after death of his wife Joan in 1608. Work on the original School house [which can still be seen on Harrow on the Hill] started then and was completed 1615. Lyon left other charitable bequests for the local poor and for the upkeep of local roads, notably the Harrow and Edgware Roads, and for roads from Preston, to the Harrow Road at Wembley and through Kingsbury to the Edgware Road. The John Lyon’s Charity still makes grants to benefit young people in NW London, but the separate Roads Trust ended in 1991.

After Lyon’s death, the School rented his farmhouse - described in 1547 as a beautiful building - to a succession of farmers [including the Bellamy and Page families], but by the early 18th century the farmhouse and lands were said to be in poor condition and the farmhouse was rebuilt in red brick. In the mid-19th century, it was occupied by the wonderfully named Thomas Sneezum.  The mid-20th century saw the farmhouse gifted by the Perrin farming family to Wembley Borough Council, who demolished it in 1960 and John Perrin Place – a council housing estate – was built on the site. 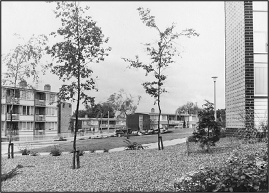 John Lyon’s support in maintaining key routes for the transport of people and goods was crucial at this time when the hamlets in Preston were linked together by rough tracks, whose upkeep was always a bone of contention. Local roads were also constantly shifting course. The enclosure of common land, usually to change its use from arable to meadow for livestock, resulted in many changes - as when Richard Page obstructed the old road and altered the route of Clay Lane (now Preston Hill) through Preston East Field - clearly seen in this map. 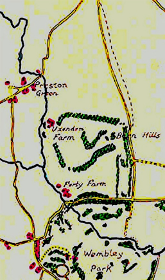 During the Civil War, Middlesex generally supported the Parliament and Sir Gilbert Gerard of Harrow on the Hill raised a regiment. However, a Richard Page of Uxendon fought in the Royalist Army at the battle of Newbury 1644, was knighted and then followed the King to Oxford. On 27 April 1646, Charles fled Oxford in disguise and a plaque in Harrow commemorates where he stopped to water his horses – although this seems an unlikely route! 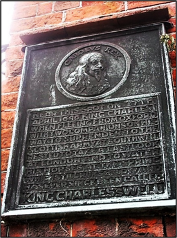 9. The plaque at the site of King Charles's Well, Grove Hill, Harrow-on-the-Hill. (Image from the internet)

After Charles’s execution, Richard fled to the Court of the future Charles II in The Hague. In the 1660 general election, John Page of Uxendon stood against Gerard who was now campaigning for the return of the monarchy. Following the Restoration, later that year, Uxendon Manor remained in the Page family until 1829. In 1661, Parliament introduced a new tax, assessing wealth by the number of fireplaces in a person’s home. Kenton, Preston and Uxendon were assessed together with only 22 homes liable for Hearth Tax – of these, Mr Page had the largest number – 10 hearths.

Preston grew slowly, in the mid-17th century, there were 5 buildings, including a new farmhouse, Hillside Farm. 100 years later, there were 9 buildings, including Preston’s first pub! - the Horseshoe Inn, licensed from 1751. Around the same time, a second Uxendon manor farm was built and Forty Farm was expanded at Forty Green. However, the coming of the railways in the 19th century would change everything – and we will look at that next week.

Please feel free to add your memories, questions or comments in the box below.