Why Brent should withdraw its application to demolish 1 Morland Gardens

Following on from his recent guest blog, “How Significant is Significance”, Philip Grant has sent the following “Open Email”:-

Dear Ms Downs and Councillor Butt,
Brent Council planning application 20/0345 – 1 Morland Gardens, Stonebridge, NW10
You may have noticed a letter I wrote, which was published in the “Brent & Kilburn Times” on Thursday 16 July. 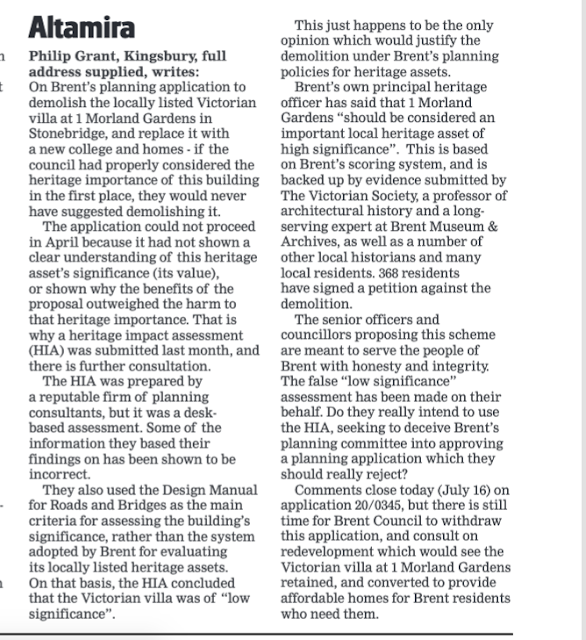 The letter’s heading in the newspaper was ‘Altamira’ (the original name of the locally listed Victorian villa which the Council seeks to demolish), but my suggested heading was ‘Let's be honest about 1 Morland Gardens’. That is what I intend to be here.
A version of the published letter has appeared on the “Kilburn Times” website today, but this omits the final paragraph as it appeared in print (full text below, for ease of reference). That paragraph said:
‘there is still time for Brent Council to withdraw this application, and consult on redevelopment which would see the Victorian villa at 1 Morland Gardens retained, and converted to provide affordable homes for Brent residents who need them.’
I am writing to recommend to you both, as the Council’s top officer and leading elected representative, that Brent Council does withdraw application 20/0345, as the only reasonable action in the circumstances of this matter.
I realise that investment of up to £43million for the proposed scheme at 1 Morland Gardens was approved by Cabinet in January this year, subject to planning approval. That planning approval is the key issue here.
Although those behind this scheme commissioned a “Historic Building Assessment” of the locally listed Victorian villa in April 2019, that document only recorded the history of the building and its current state. It did not ‘demonstrate a clear understanding of the archaeological, architectural or historic significance’ of 1 Morland Gardens, which is what is required before a planning application affecting a heritage asset is put forward.
As I said in my published letter: ‘if the Council had properly considered the heritage importance of this building in the first place, they would never have suggested demolishing it.’ In trying to remedy the situation, after this had been pointed out by the planning Case Officer in April, a consultant firm was appointed to prepare a ”Heritage Impact Assessment” (HIA) on behalf of the Council (as applicant), which was submitted last month.
I have publicly referred to that report’s conclusion as a ‘false “low significance” assessment’. I know that is a serious charge to make, but I believe it is fully supported by the detailed objection comments I submitted on 5 July (a copy is attached, for information). In reality, the building has "high significance", which means that Brent's planning policies require the building to be retained as part of any sympathetic redevelopment of this site.
My letter refers to the senior officers and councillors proposing the 1 Morland Gardens scheme, and asks: ‘Do they really intend to use the HIA, seeking to deceive Brent’s planning committee into approving a planning application which they should really reject?’ I put the same question to you, and look forward to receiving your answer in the near future.
There is a precedent for Brent Council withdrawing a planning application which proposed the demolition of an important locally listed building. This happened in 2012, just before the application (made in the name of its development partner) seeking to demolish the remaining Victorian section of Willesden Green Library was due to go to Planning Committee. The reason given was ‘to allow for further consultation’. 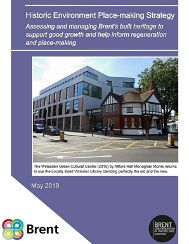 The fact that demolishing that locally listed Victorian building would have been a mistake (as well as being against Brent’s planning policies) is clearly acknowledged on the front cover of Brent’s May 2019 Historic Environment Place-Making Strategy (part of the draft Local Plan). The caption under the photograph of the 2015 building proudly states that it ‘returns to use the locally listed Victorian Library blending perfectly the old and the new.’ That is what a future scheme for 1 Morland Gardens, should also do, not knock it down!

If you have any doubts that withdrawing the Council’s planning application is the right thing to do, let me draw your attention to a key paragraph (4.1) of the May 2019 Strategy document:
‘The value of Brent’s heritage should not be underestimated and is a key message of the Historic Environment Place-making Strategy.  Once a heritage asset is demolished it cannot be replaced.  Its historic value is lost forever to the community and future generations and it cannot be used for regeneration and place-making purposes.  The effective preservation of historic buildings, places and landscapes and their stewardship is therefore fundamental to the Council’s role.’
If Brent Council goes ahead with application 20/0345, and somehow manages to get it approved, it will not only cause the loss of this important locally listed heritage asset. It would seriously damage Brent Council’s reputation, and would set a precedent that would put every other heritage asset in Brent at risk of demolition. I hope that you will not allow that to happen.
Yours sincerely,
Philip Grant.
Text of my letter, as published in the “Brent & Kilburn Times” on 16 July 2020:
‘Altamira
On Brent’s planning application to demolish the locally listed Victorian villa at 1 Morland Gardens in Stonebridge, and replace it with a new college and homes - if the council had properly considered the heritage importance of this building in the first place, they would never have suggested demolishing it.
The application could not proceed in April because it had not shown a clear understanding of this heritage asset’s significance (its value), or shown why the benefits of the proposal outweighed the harm to that heritage importance. That is why a heritage impact assessment (HIA) was submitted last month, and there is further consultation.
The HIA was prepared by a reputable firm of planning consultants, but it was a desk-based assessment. Some of the information they based their findings on has been shown to be incorrect.
They also used the Design Manual for Roads and Bridges as the main criteria for assessing the building’s significance, rather than the system adopted by Brent for evaluating its locally listed heritage assets. On that basis, the HIA concluded that the Victorian villa was of “low significance”.
This just happens to be the only opinion which would justify the demolition under Brent’s planning policies for heritage assets.
Brent’s own principal heritage officer has said that 1 Morland Gardens “should be considered an important local heritage asset of high significance”. This is based on Brent’s scoring system, and is backed up by evidence submitted by The Victorian Society, a professor of architectural history and a long-serving expert at Brent Museum & Archives, as well as a number of other local historians and many local residents. 368 residents have signed a petition against the demolition.
The senior officers and councillors proposing this scheme are meant to serve the people of Brent with honesty and integrity. The false “low significance” assessment has been made on their behalf. Do they really intend to use the HIA, seeking to deceive Brent’s planning committee into approving a planning application which they should really reject?


Comments close today (July 16) on application 20/0345, but there is still time for Brent Council to withdraw this application, and consult on redevelopment which would see the Victorian villa at 1 Morland Gardens retained, and converted to provide affordable homes for Brent residents who need them.’
Philip Grant's original objection comment on the application: