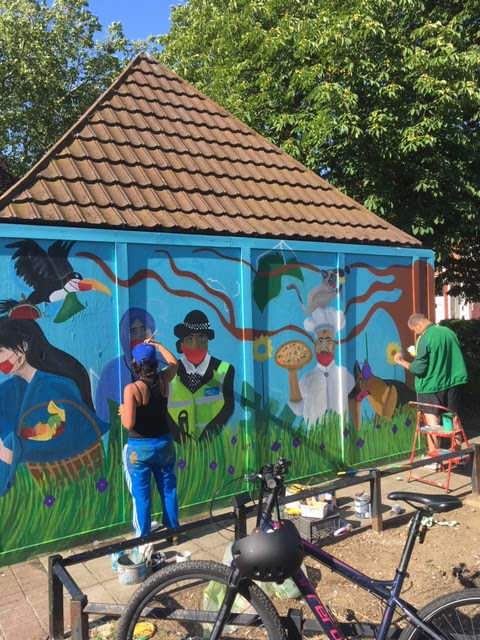 Following on from Philip Grant’s excellent Wembley history series - especially the last one about Sudbury, perhaps I can provide an update on Butler’s Green.

A very large part of Sudbury was originally massive green open space called the Sudbury Common with a large number of farms being established over the years.

John Copland who was a Purser (Sort of accountant/purchase manager) on British Navy ships and served during Horatio Nelson’s time at the Battle of the Nile acquired a property called Crabbs House on what is now Barham Park. Over the next 40 years he continued to acquire land in the area and at his death in 1843 (he is buried in a vault in Kensal Green cemetery) he owned around 350 acres  of  land stretching from the Triangle in Wembley all the way to the bottom of Harrow on the Hill - this must have also included what is now Butler's Green.

At some point in the 1870s that part was acquired by William Perkin when he moved into Sudbury near to the present Methodist Church.

Sir William Perkin (he was Knighted in Early 1900s) is probably Sudbury’s most famous person in the world.

As a young boy he was very keen to pursue scientific education. While experimenting with tar (residue of coal) trying to create a substitute for anodyne he accidentally created a purple liquid substance. When trying it on some cloths he realised that he actually created a first synthetic dye for colouring cloth. Following a few more experiments, tests and refinements his dye product turned out to be much more reliable and longer lasting than natural dyes used at the time.

He set up a factory in Greenford and started manufacturing dyes as a business. It was a big success and young William is claimed to be the founder of the modern clothing industry which his colour dyes revolutionised.

In the 1870s when he moved to Sudbury the population was tiny and most of the land was still open fields. Like in other nearby places the population explosion came as part of the arrival of the Railways with the Sudbury & Harrow Road station opened in 1903 and Sudbury Town a year later.

Sir William Perkin died in 1907 and the land that is now Butler's Green was purchased by Wembley District Council in 1920 from the Trustees of his Estate. As Philip mentioned in his article it was renamed Butlers Green after Edwin Butler who became the first Mayor of the newly formed Wembley Borough Council in 1937.

He only became the 1st Mayor because Titus Barham who was due to be the “Charter Mayor” and who paid £4,000 for the mace and chains of office (over £250,000 in today’s money) died on the very day he was due to take up the his office.

I am one of the Trustees of Barham Community Library based in Barham Park. Philip Grant has kindly presented a number of his history talks in our library and we hope for more in the future. We are always keen to help local people learn of the local history of our area but also to pursue improvements with a bit of art.

Despite its important local history Butlers Green has been somewhat neglected in recent years.

We therefore decided to bring a bit of colour to the area by creating a Thank You Mural to all the workers and volunteers who continued to support our community during the Covid 19 crisis, on hoarding erected around a disused toilet block.

The Mural was designed by Alessandra Grasso, who is Barham Community Library ‘artist in residence’ with the help of her sister Francesca and others.

The idea was supported by Sudbury Town Residents Association and Daniels Estate Agents. It has been paid by a small Love Where You Live Grant and donations from local people.

The disused toilet block is leased by Brent to U.K. Power Networks. Hoardings had to be placed on 3 sides as the brickwork is cracking up.They were painted white with fading paint and a bit unsightly.We decided on a colourful makeover with people, animals and flowers. Young children passing by love the animals and the overall reaction was positive.We also painted other bits and provided a Notice Board for local history and local information.We asked the Council to improve the outlook of the 2nd disused toilet next door which is also unsightly.The bear in the picture is our mascot ‘Titus Bear’ after Titus Barham. The bear was part of the Barham Coat of Arms.

This is "love where you live" in action, and the sort of local community initiative that Brent Council should be supporting.