Proposals for the redevelopment of Wembley Park Station car park to build five new buildings between 13 and 21 storeys in height (456 residential units) have been submitted to the council. This is just the latest site highlighted for high rise, excessive density buildings that are slowly changing the face of Wembley as we know it. As a resident of Brook Avenue and having read the various local, London and national plans, I believe that the proposed development contravenes many of the policies set out in the plans and would have a serious adverse impact on the area. The site will be overdeveloped, compromising the quality of the development, character of the street and supporting infrastructure capabilities. If you are a resident of Brook avenue or the surrounding area, or even if you have been left feeling disenfranchised about the emergence of such buildings in Wembley, please read on. Details on how to get involved will be at the bottom of this post.

The site itself has been highlighted in numerous council plans as being “inappropriate” for tall buildings, as per the London plans guidance to grade sites on their “appropriateness” for tall buildings. Based on the council's own policies, the site is clearly not suitable for such buildings and should not be given approval. Given the significant detrimental impact tall buildings can have on local character, it is important that they emerge as part of a planned exercise in placemaking, rather than in an ad hoc, speculative way.

Historically, Brent is characterised by low to mid rise buildings, with any tall buildings being directed towards town centres. A 21 storey building on a road with mainly two and multi storey buildings would be completely out of keeping with the context and character of the area. The proposed developments will pose both a literal, and metaphorical encroachment on residential suburbia and as the London Plan, Chapter 7.21 states: “The building form and layout should have regard to the density and character of the surrounding development”. I'm sure over the years many of you have noticed a surge in tall buildings in Wembley, often in areas where they do not fit in with the suburban surrounding character. Whilst it is understandable that the push for taller buildings stems from a need for more housing, high density does not always have to mean high rise development. Perhaps efforts should be made for developments that both contribute to the required density and are also in keeping with the character of the area. 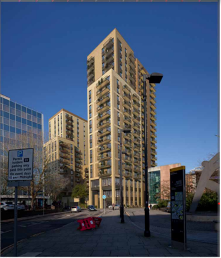 Rendering of what the buildings would look like from verified view - Barn Rise junction with Eversley Avenue and ... 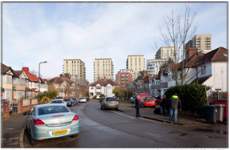 The increase in density due to the developments would amount to serious ‘cramming’ on what is a quiet, residential, low density road. The buildings adjacent (Matthew's Close) were given an indicative capacity of 100 units in the Wembley Area Action Plan- so how can a site that is on the same street and is in fact 0.2 hectares smaller, be allowed to be built at the indicative capacity of more than quadruple that? The development would also intensify pressure on already burdened infrastructure such as schools and GP’s. The 456 units, which would house more than double that in people, would result in an increased demand for school places within the Borough, without providing any contribution to building new school classrooms. It would mean an increased pressure for the use of existing open space, without contributions to enhance that open space. The development only provides an average of 12.8sqm of private and communal amenity space per unit- this equates to only 64% of the local plan requirements, which would lead to greater pressure on the surrounding open spaces in the area (like what is currently going on with King Edwards Park). Where is the commitment from the council to create open, green spaces to accommodate the growing population of Wembley?

The proposal also makes no provisions for the loss of a car park which accommodates 200 visitors daily.  Brook Avenue is the most heavily parked road in Brent and the loss of the car park, as well as the addition of 456 new homes, will have a serious adverse impact on the street as well as the surrounding areas. Parking will spill onto Brook avenue (a street which already has issues with street parking) as well as the surrounding Barn Hill area. Without mitigation measures, the high levels of population growth anticipated due to the development will place serious pressure on the existing road network, particularly on event days.

The development will not make a significant contribution to Brent's housing needs as it favours one bed and studio flats as opposed to family homes. Brent’s predominant needs are more for larger sized (3 bed or more) family dwellings. Of the 456 dwellings that are proposed to be built, only 10% will be 3 bedroom, as opposed to the 25% that is required by the council. This is a clear lack of consideration for families which should be encouraged to stay and contribute to the establishment of a long term mixed and sustainable community in Wembley. The council's own policy states:

The Development would also lead to breaches of the BRE Guidelines (Building Research Establishment) in terms of daylight and sunlight received by the neighbouring properties. It is understandable that existing levels of light cannot be maintained, but this should not be to such a degree that they breach BRE guidelines. The council should ensure that the quality of housing output is not compromised by the need to make the most efficient use of land.

The proposed development will pose both a literal, and metaphorical encroachment on residential suburbia. It seems that this development, like many others emerging all around Wembley, puts quantity over quality. Under the guise of “making the most efficient use of land”, other equally important criteria have been ignored, such as quality, capacity of the street, parking, impact on amenities etc. It should not go remiss to mention that should the council expect it’s policies to be taken seriously, it should lead by example, and not repeatedly contravene it’s own plans through granting permission for development where it would otherwise be unsuitable. If a building that violates so many local and national policies is granted planning permission, what will this mean for the future of Wembley?

Through the strive for the ‘regeneration’ of Wembley, the council has seemingly overlooked the thoughts and opinions of the people who make it what it is: its residents. I urge you all to get involved to help make our voices heard. I will leave you all with a quote from the Emerging Local Plan, Paragraph 4.51:

Meeting indicative capacities should not be used to justify overriding other policies where it would result in creating poor developments.

If you are a resident of Brook avenue or the surrounding area, you can object to this development either by writing your comments on the council website (the application reference number is 20/0967) or emailing your objection to Toby.huntingford@brent.gov.uk .