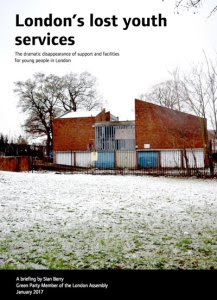 My new report shows councils have had to cut more than a third of their youth services since 2011, and will have to make more cuts next year unless the Mayor steps in.

The report – London’s lost youth services – shows that London council youth services have lost a third of staff and £22 million in funding cuts since 2011.

Government cuts have hit all London councils hard, and youth services have been put on the chopping block across our city as a result. My findings include that the average council has cut youth service funding by nearly £1 million since 2011, and that plans are in place to reduce 2017/18 budgets by another 25 per cent on average.

The impact of these cuts could be devastating. Good quality youth services help young people develop skills, be creative and live positive social lives, and make them less vulnerable to falling into crime or the exploitation of groups like gangs.

The Mayor does fund some youth initiatives through policing budgets, but these are mainly targeted at knife and gang crime, and many of them also depend on the general youth services that are seeing the deepest cuts being available once young people decide to make changes to their lives.

This Wednesday at Mayor’s Question Time, I’ll be asking the Mayor what he can do to help. He has a fund worth £18 million a year that puts £3 million into services for young people – the London Crime Prevention Fund – but it needs expanding. It was started in 2013 and recently renewed by the Mayor for four years, but only at the same level of funding as under Boris Johnson. 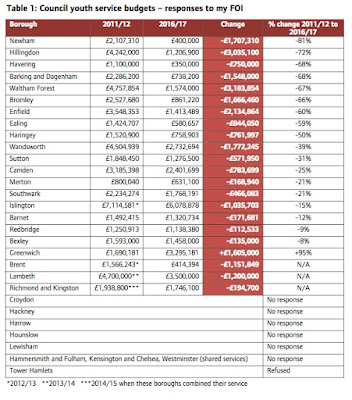 My report , ‘London’s lost youth services’, is based on a freedom of information request to borough councils. It reveals that youth services, which are non-statutory and not protected from austerity cuts, have been cut back dramatically in the past five years.

There are listed in 2015 there were approx 359 Gang members in Brent. Committing approx 57% of reported crimes. Read the report here https://intelligence.brent.gov.uk/BrentDocuments/JSNA%202015%20-%20Gangs.pdf.
Once digested, please tell me that this is not a direct result of the closure of Youth Services?

You've misread it. 57% of crimes committed by gang members are violent - they haven't committed 57% of all crimes.

It also says the average age is 24, and so wouldn't be using youth services.

James I think that you are also missing out on logical thinking here. The average age may be 24 but what is the age spread? It is inevitable that if you take away youth clubs and the associated mentoring that went with them that the kids will get drawn into the gang culture.

James, nobody wakes up one day at 24 & just starts to commit crime. There is a life history prior to being 24 and a whole myriad of life experiences. Hence the average age of being first arrested (according to that linked data being 14).

Research shows that people who have behaviour that brings them into contact with the law have had done so from an early age that persists over time with environmental factors that are amenable to change. Environmental factors that include Poverty, low maternal educational, irregular activity and harsh parenting. This has a high lifetime cost to the person, their family and to society. Other research (including from the London School of Economics) shows that early intervention (i.e. youth services) are effective and save the public purse, per pound much more than is spent.

That being said: the term 'gang' is just a smokescreen used by public authorities such as in Brent to target young people whilst distracting from the social / cultural and political issues that contribute to violence commited by young people.

Issues such as that we suffer with the local labour council who have an inability to get past short term thinking around 'cuts' and axing services for young people in misguided attempt to 'save' money yet costing us all much more in the long term.

100% he knows what he is talking about. Lets face the truth and not beat around the bush. The Police and Trident initiative don't count for nothing, nobody not the police, safer neighbourhood or the Police give a shit. This is a big waste of money, everybody know this. the Police, the Council They don't give a damn it has been a great waste of public resources, cos it has not made any difference. The only thing that the "gangs understand is the following the 3 R's " Revenue, Revenge and Respect" Its not about anything else. These kids cannot go anywhere they living in council or housing association properties. Its not about postcodes or where you live, they dont even have the intelligence to wash the money or make it legitimate. They just post stuff on You Tube. Everybody knows they put out anything they want with good videos, with drones and professional editing why can't the police and Brent Council sort it out. If they policed the neighbourhoods like they do on an event day they would shut down the whole estate, and sort it out. Just asking the question " why is the CCTV in Church Road and Stonebridge so bad. After all we now in the 21st century, we have technology that is far superior to the 1970's how can somebody get shot, stabbed or injured in these neighbourhoods and police etc don't get no decent footage on cctv or the perps??????????????????????

I hate to say it but James reminds of Michael Gove's comment about "experts".