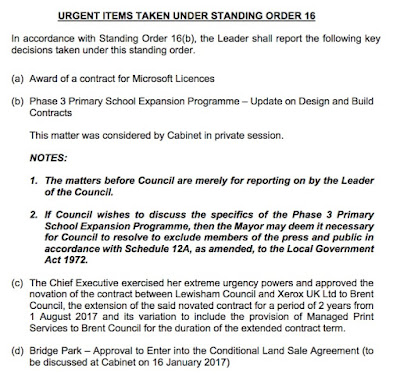 I drew attention to the above notice that was posted on the Agenda of Monday's Council Meeting in a recent article LINK claiming that the public interest was not served by curtailing discussion on these important items.

At the Council Meeting Cllr Warren moved the suspension of Standing Orders to allow discussion to take place but this was heavily defeated by Labour and other councillors.

In the course of the discussion Cllr Warren, speaking to Muhammed Butt, Leader of the Council, referred to 'Your friend Mr Auchi'.  Sir Nadhmi Shakir Auchi is Chairman of the off-shore British Virgin Islands company General Mediterranean Holdings (GMH) which is Brent Council's partner in the redevelopment of Bridge Park.  Muhammed Butt is the lead member for the conditional land sale of the Bridge Park site to GMH.

At the Brent Cabinet on January 16th Cllr Margaret McLennan, Deputy Leader of the Council, said that she was 'thrilled' by the Bridge Park deal. LINK

Auchi is controversial because of a 2003 allegation of  fraud LINK and of course the whole issue of tax havens and tax avoidance is a current political issue with Jeremy Corbyn promising action by a future Labour Government.

Cllr Thomas intervened to call for Cllr Warren to withdraw his statement about 'Your friend Mr Auchi' directed at his leader, as the Council Meeting was being streamed and he wouldn't want a 'wrong impression' to be given. Warren, saying he couldn't remember exactly what  he'd said,went on to say, 'Mr Auchi has connections with the Labur Party. Let me say that. That is what I was referring to.'

The alleged link goes back to 2001 when the Guardian published an article entitled 'A Tycoon, a Minister and Interpol' LINK and involved Keith Vaz MP.

You can see the live stream and the vote on suspensions of standing orders here:

It is now (I believe) 464 days until they can be booted out. Like many others I am counting down the days. Heaven help them when they cone round my doorstep canvassing.....I bet they skip my gate - still there's still the public media.