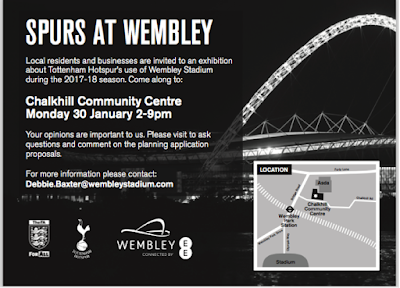 Councillors have received little notice of this meeting and the public even less.

The proposals will make a big impact on Wembley as Jaine Lunn outlines below.

Wembley resident Jaine Lunn has not been impressed by the proposals.  This is the comment she made on my earlier blog about the meeting:

Meanwhile back in the real world. Local residents will be treated to more disruption to there daily routines as once or maybe even twice a week, 75,000 people visit Wembley Stadium (an international destination renowned the world over).

To the soundtrack of Spurs fans chanting the attributes of Harry Kane, whilst traipsing along the high road, swigging cans of beer, decorating every road within a 1,000 metres of the stadium with litter, overflowing waste bins, using every conceivable nook and cranny as a public urinal. Bumping along the pot holed roads, rattling sinking drains and the mangled manhole covers. Jostling for space amongst the HGV's and Skip Lorries removing rubbish and delivering plant works and materials to all the new developments in process of being demolished or built, of which Brent House, Chesterfield House, and Curtis Lane just to mention a few. Adding to the already daily occurence of gridlocked Wembley, where is takes more than half an hour to drive several hundred metres at peak times.

All the while ensuring the already overcrowded Public Transport system is bursting at the seams, TFL and the Mayor failing miserably in delivering their promises of more buses, less pollution, better air quality. Oh the anticpation of what's to come, I can't wait, but I won't be the only one standing in the queue for the soap box telling you "I told you so". However there will be some winners to this scenario, look at all the overtime Veolia and the Police will be entitled to. Not to mention all the people who work in the Fast Food outlets along the high road, pubs, and security personnel required to keep the peace!