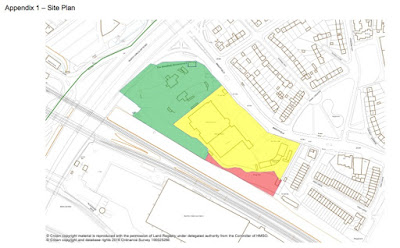 Despite warnings about dealing with off-shore companies by the late Cllr Dan Filson and Philip Grant in July 2015 LINK the Cabinet is due to back a deal over the three parcels of land that make up the proposed development at Bridge Park whcih includes a replacement Sports Centre, a hotel and housing.  The companies are General Mediterranean Holdings (GMH) and Harborough Invest Inc.

Filson pointed out that the companies were not registered at Companies House but instead were overseas registered, a Luxembourg Holding Company and in the British Virgin islands. This meant that the usual financial checks could not be carried out.
The founder and chairman of General Mediterranean Holdings is Sir Nadhmi Shakir Auchi. In 2003 LINK Auchi was convicted of fraud following his involvement in a $504 million corruption scandal centred on the French oil company Elf Aquitaine which Wikipedia says was described as 'the biggest political and corporate sleaze scandal to hit a western democracy since the second world war.'
Auchi was given a $2.8 million fine and a 15 month suspended jail sentence. Filson warned that the council is dealing with a 'convicted fraudster'.

The Guardian has alleged that Auchi has links with the Labour Party. LINK

After an account of the Cabinet meeting appeared on Wembley Matters Clr Filson made a comment about the Cabinet discussion, part of which read:


The wider issue of the ethics of dealing with tax haven companies wasn't touched upon at all nor the fraudster angle. I understand Councillor Pavey's position that it needs government action to deal with tax haven companies (to say nothing of persons being company directors of overseas companies who, by my book, should be disqualified from holding any positions of trust in any company trading or owning land in this country).

However Brent can have its own policies; but what should they be here? The land south of the North Circular Road at Stonebridge Park has been a derelict eyesore for a couple of decades. Brent can engineer development here by intervention using such land as it has as a bargaining tool. If we take the ethical route and don't treat with tax haven companies will we get better or worse terms from other companies? Conceivably could Councillors be surcharged for not getting "best value" in a deal? Will any action happen on this site at all for another decade?

I don't know how I would respond on these issues. My disappointment was that no attempt has been made to address them before this particular decision came to Cabinet despite the identity of these 2 companies being known for some time, years even. So the Cabinet was obliged to agree to a deal involving these two companies without a financial appraisal in front if it and without a stated policy on dealing with tax haven companies. It leaves an unpleasant taste.


As the Purchaser is a newly-created subsidiary company with no assets, then there are risks to Council if it fails to perform its obligations under the CLSA and associated documents, as there would be no substantive entity against which to take legal proceedings for breach of contract, etc. To mitigate this risk, both GMH and Harborough will be named as “Guarantors” in both the CLSA and the Overage Deed, being the two documents which contain substantive obligations upon the subsidiary company. As such, both GMH and Harborough will guarantee to perform the obligations of the subsidiary under these two documents in full (as if they themselves were named as the main contracting party), should the subsidiary fail to so perform any obligation. Updated financial checks against both companies prior to exchanging the CLSA, will be carried out to ensure that they have sufficient financial strength to perform the obligations under the CLSA and Overage Deed if called upon to do so as a result of the subsidiary’s default
Further, As GMH and Harborough are both foreign-registered companies, GMH’s lawyers will obtain (at GMH’s own cost) formal legal “opinion letters” from reputable law firms qualified in Luxembourg and BVI respectively in favour of the Council, to confirm that these guarantee provisions will be legally binding upon both companies, and that the Council could pursue either or both company through the English courts if they in turn defaulted on these guarantee obligations.

It should be noted that GMH has suggested that it may ask the Council to transfer different parcels of the Council’s Land and the salvage yard to different subsidiaries to be set up later by GMH, in order that a separate subsidiary would hold the land intended for the residential element of their development, the affordable housing element, the hotel element, the retail element, etc. This is permitted under the CLSA, and is not uncommon where developers wish to have different land uses held by different entities, but would not alter the overall extent of land which the Council will transfer or the total amount of monies which the Council receives for that land at completion of the transfer(s). Even in these circumstances, the guarantees provided by GMH and Harborough under the CLSA and Overage Deed (as discussed above) would continue to cover these additional subsidiaries in relation to the obligations in those documents which still remained to be performed

Whether the complex report tabled for the Cabinet amounts to the financial appraisal Cllr Filson thought essential  remains to be seen. Unfortunately Brent Council has restricted documentation that may have revealed more detail of the financial arrangements. LINK