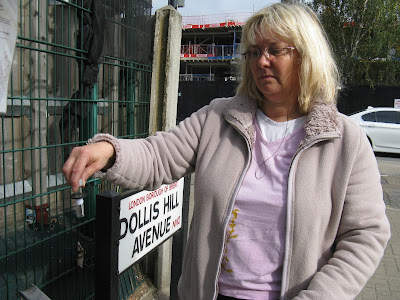 Four Brent community groups have been monitoring air pollution in the southern part of the Borough as part of a citizen science project across London. Four more voluntary associations have now joined forces with them in a campaign to raise awareness of the dangers of air pollution and improve air quality in Brent. Brent Council are supporting this effort.

In late 2016 Transition Town Kensal to Kilburn (TTK2K), Transition Willesden (TW) and Queens Park Area Residents' Association (QPARA) put up “diffusion tubes” to monitor nitrogen dioxide (NO2) in their areas. They surveyed main and residential roads, outside schools and in parks. The results are shocking: three quarters of the twenty sites the Transition groups tested exceeded legal limits for the pollutant. This complemented a similar survey of Chamberlayne Road NW10 by Kensal Rise Residents' Association (KRRA) in 2014. All the findings are consistent. They demonstrate that the closer you are to busy routes the more exposed you are to illegal pollution levels.

All eight groups, now including Brent Friends of the Earth (BFoE), Aylestone Park Residents’ and Tenants’Association (APRATA), Kensal Triangle Residents' Association (KTRA) and Brent Eleven Streets (BEST), met last week with Queens Park Cllr Ellie Southwood, Cabinet Member, Environment. They now plan to campaign together and work with others in the community to alert residents of the dangers of air pollution, show how people can reduce their exposure to it and improve air quality. This work builds on a successful track record of residents' associations coming together to energise and engage the Queens Park ward community on air pollution.

Air pollution is a health hazard. It is estimated to be responsible for the premature death of 9,400 Londoners a year and many serious illnesses. This compares with 127 deaths from road accidents in London in 2014. There were 112 early deaths in Brent from air pollution in 2010. Medical research shows that air pollution is linked with cancer, strokes, heart disease and respiratory problems. The main pollutants are nitrogen dioxide and particulate matter, particularly from diesel vehicles. The principal source of air pollution in Brent is road traffic, though emissions from heating systems also contribute.

Viv Stein from Transition Willesden says, “Not surprisingly we found the highest levels of NO2 pollution along busy main roads – Cricklewood Broadway down to Kilburn High Road, with many other areas also above what's considered safe. In view of this we are pleased to learn that greener buses will be coming to this heavily polluted route under the Mayor of London's Low Emission Bus Zones, though we will have to wait till at least 2018.

“Though our findings show only a snapshot of pollution over a short period, results are in keeping with other studies across London. We would like to do further monitoring, and involve schools, businesses, residents, health providers and the Council to raise awareness and take action on this public health issue. Along with other local groups we are now planning to raise awareness about vehicles idling, and about the damaging impact of all diesel vehicles, including diesel cars which now make up nearly half of the cars on the road.”

Janey McAllester from Transition Kensal to Kilburn says, “Pollution affects us all. Drivers need to be aware they and their passengers are breathing in a lot more pollution inside their cars than walking or cycling. The less time we spend in cars, the better for everyone. We want to encourage more cycling and work with the Council to help people cycle and walk more.”

Souraya Choukeir from QPARA says, “Air pollution is not something you can see so people are often not aware of how bad it is or of the harm it does. But there are things that we all can do to reduce it and protect ourselves from it such as switching to cleaner, non-diesel vehicles, driving less, and, where possible, walking on less polluted side streets.”

Cllr Ellie Southwood says, “It was great to see residents’associations and green groups coming together to share hard evidence about the problems of air pollution in Brent. I look forward to their helping us develop actions to deliver the Borough’s new Air Quality Action Plan and I am looking forward to working with them to make a positive difference to the air we breathe in Brent."

The two Transition Town groups each set up ten diffusion tubes to monitor NO2 in their areas between September 24th and October 8th. They also tested for particulate matter at a number of sites. This was part of the Cleaner Air 4 Communities programme run by the London Sustainability Exchange (LSx). QPARA monitored ten sites around Salusbury Road in August and October. BFoE have also started monitoring this month.


The groups' findings will add to Brent Council's own monitoring data which measures NO2 at 27 locations across the Borough. Much of Brent is designated an Air Quality Management Area (AQMA) as clean air standards are not being met. The Council's new Air Quality Action Plan will be going out for consultation soon. The voluntary groups hope that the plan will engage with their efforts, and make all residents and those who work in Brent aware of the need to combat this serious threat to our health and well being.

To find out more about the Transition groups' project, see their results and join in, see http://ttkensaltokilburn.ning.com/group/air-pollution-monitoring. More on QPARA's project is at http://www.qpark.org.uk/action-groups/environment/. 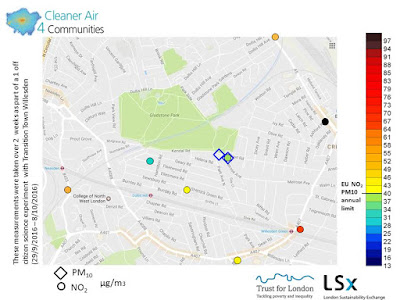 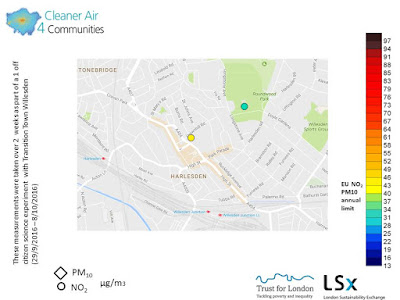