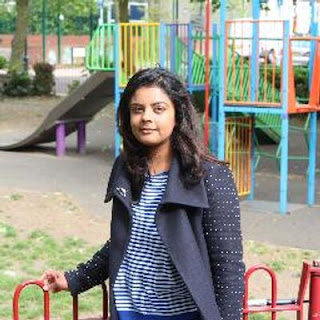 The resignation means that three members of the 8 strong Cabinet (Pavey, Mashari and Mitchell-Murray) have resigned since Butt's successful retention of the Labour leadership in May 2016 after a challenge from Michael Pavey.

Cllr Patel had been Lead Member for just 25 minutes when she was asked to speak at last night's Council Meeting so  understandably she limited herself to a brief introduction.

Cllr Patel went to Furness Primary School and Claremont High and is a parliamentary researcher.   She previously worked for Frank Dobbs MP. She is married to fellow Brent councillor  Matt Kelcher who is chair of Resources and Public Realm Scrutiny Committee.

Mili Patel is on the board of Brent Housing Partnership which is likely to be dismantled when Brent Council brings council housing back in-house.

Her other Council positions are listed as:
The Children and Young People position is challenging at the best of time, covering as it does local authority schools, children's social work, safeguarding and the wellbeing of all young children and young people in Brent regardless of the type of school that they attend, but with funding cuts to schools in the headlines, the job is even more daunting.

Cllr Patel would have got a taste of that in the debate that took place at Council on school funding  when the following Labour motion was discussed. She did not contribute to the debate.

This Council condemns government proposals for a National Schools Funding Formula and rejects any effort to pay for the failure of an ideologically imposed programme of austerity by choking off essential and already insufficient funding for the education of children and young people in Brent.

During the debate Cllr John Warren lambasted various Labour councillors quoting the bank balances of schools where they were governors. He claimed Brent schools had up to £30m  stashed away.  He did not mention that schools have to justify these  balances to the Council  and provide evidence of the ear-marked projects to which they are allocated.

The debate can be seen here:

Warren is utterly clueless about school governance, isn't he.

A cabinet member married to the chair of the Scrutiny Committee. What could possibly go wrong?

Nepotism is rearing it's ugly head, didn't expect anything less from Bent Council