Public excluded from yet another key Brent Council discussion 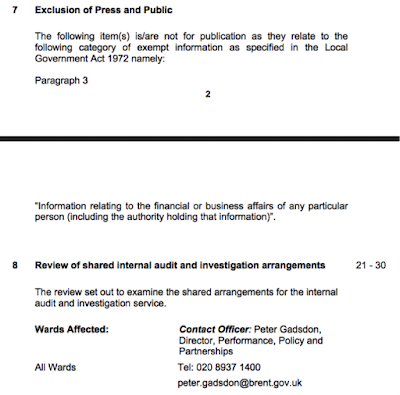 The KPMG auditor is still investigating  objections to Brent Council's 2015-16 accounts by six local residents over the payment to former Director of HR Cara Davani LINK  and PcW has issued a 'limited assurance' verdict on Brent's Planning procedures LINK and drawn attention to potential for fraud.

Given that context there is  surely public interest in Brent's interal audit and investigation arrangements but the public have been  excluded from hearing consideration of these matters at the next meeting of the General Purposes Committee on January 30th.

The General Purposes Committee has hithertoo been made up of members of the Brent Cabinet, plus one opposition member, an arrangement that has itself drawn criticism.  The agenda item on the Council's website today still includes Cllr Mashari rather than her successor Cllr Tom Miller. Cllr Reg Colwill is the opposition member. Any change of membership will  have to be approved by Full Council at the January 23rd Meeting. 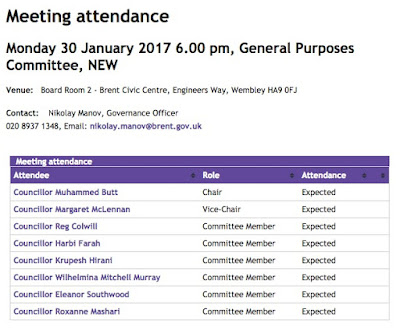 I believe that Brent's internal Audit and Investigations arrangements were switched to being shared with Ealing (and possibly another borough as well?) as part of cost-saving measures around 2015. It would appear that General Purposes Committee will be looking at how the new, shared relationship is working in practice, but they (and I suspect, in particular, the committee Chair) don't want the public or press to know anything about it, or be able to comment on how "successful" this has been.

I have a personal interest in knowing "what went wrong" at Audit and Investigations in June / early July 2015, as I sent detailed allegations to the then Head of Brent's A&I team, under the heading: "Possible Financial Malpractice / Irregularity over leaving arrangements for Director of HR".

My covering email included the following:

'Under Brent’s Anti-Fraud and Bribery Policy, your department has a duty to prevent financial malpractice where possible, so that funds are not lost to the Council because of irregularities such as undisclosed conflicts of interest. I believe that any potential payments, or indemnities, which might be given to Ms Davani as part of her leaving arrangements are likely to involve conflicts of interest, and have set out the reasons for this in the attached report and supporting documents.

I would ask that you ensure, as a matter of urgency, that any financial arrangements with Ms Davani, other than the payment of her basic salary up to the end of June 2015, are suspended until the outcome of a proper investigation into the points I have raised.'

I finished my email by saying:

'I intend to publish the text of this email, although not any of its attachments, so that its contents are on public record, thereby hopefully ensuring that there is no attempt by anyone in a position of power at the Civic Centre to stop you from freely carrying out the Policy’s stated intention to ‘investigate any allegation that may have a direct, or indirect, impact of the finances for which [the Council is] responsible.’ '

I learned in early July 2015 that the Head of Brent's A&I Team, who had acknowledged receipt of and thanked me for my allegations, no longer worked for the Council (possibly as a result of the new shared arrangements). The matter had been passed to Brent's Chief Finance Officer, and on 13 July 2015 he informed me that he was not persuaded of the need for Audit and Investigations to look into the matters I had raised.

On 15 July 2015, Brent Council paid Cara Davani £157,610 under a "settlement agreement", but it was nearly a year before it admitted that any "pay-off" had been made, and how much it was.

That admission was made in Brent's 2015/16 accounts, and as a result those accounts are now the subject of objections from five local electors to the Council's Auditor. Dealing with those objections will, unfortunately, involve further expense to the Council.

Does this example show that the shared arrangements, rather than having a dedicated Brent A&I service, have proved a worthwhile cost-saving measure, and that everything has worked out well? You can guess what I think, and we will probably never know what the members of General Purposes Committee think about it.

What a joke, Cllr Reg Colwill the opposition member recognised only by Cllr Butt. Who most of the time votes with Labour in the council chamber or abstains.

The entire General Purposes committee is a joke. Meetings routinely last for less than half an hour with zero discussion. It's where Butt hides to make controversial decisions. Davani used to love it.

The position over Cllr. Butt and General Purposes Committee (which is supposed to be where the Council deals with important matters which are deliberately separated from those dealt with by the Cabinet) was looked at in a guest blog, and comments on it, last October:-
http://wembleymatters.blogspot.co.uk/2016/10/does-councillor-butt-have-too-much-power.html