From the People's Assembly

The NHS crisis has reached a new level. In the last few days the Red Cross declared a 'humanitarian crisis' in the NHS and were forced to intervene. This Government has knowingly and wilfully created the crisis in the NHS. Hospitals are underfunded, social care has collapsed, which puts more pressure on hospitals, staff are overworked and conditions are deteriorating.

The Governments drive to privatise the NHS will only make this situation worse. We must take action to defend our NHS or we risk losing it forever.

Over the next few weeks there are some key events/actions building up to a massive #OurNHS National Demonstration on Saturday 4 March.
Please do all you can to make sure they are as big as possible.

Over the next few days we're calling on all local groups and campaigns to do an emergency action at a local hospital.

In London this Thursday, we're organising an emergency rally at the Department of Health from 6pm.

We're asking local groups and campaigns to set up an emergency rally or protest at local hospitals across the country. A series of leafleting actions for the National Demonstration have been organised already, you can find details on the Facebook event here. If you want to add to the list of flyering sessions and actions please email office@thepeopelsassembly.org.uk so we can add to the list and promote.

*For a fully funded, publicly owned, NHS & social care service
*No cuts, no closures, no privatisation
*End the pay restraint for NHS staff 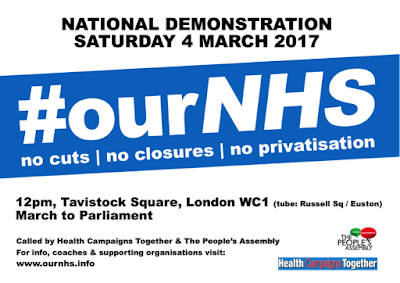 Transport is being arranged from across the country, full details coming soon. Called by Health Campaigns Together & The People's Assembly
Posted by Martin Francis at 13:58:00