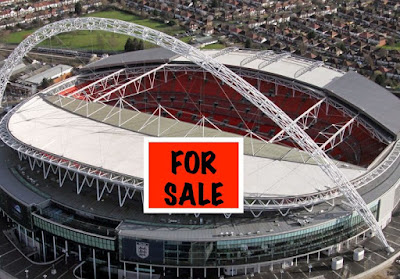 An urgent item has been put on the Brent Cabinet agenda on May 21st to re-examine th funding decisions for Olympic Way Improvements (including the replacement of the Pedway by steps) 'following the announcement of the possible sale of Wembley Stadium to a private individual/company.'

The £18m allocated to the scheme proved extremely controversial during the recent local election with residents suggesting that the money would be better used to tackle potholes and dangerous pavements throughout the borough. LINK

There have been persistent reports that the Football Association, currently owners of Wembley Stadium, have not been convinced that the replacement of the Pedway is desirable, while Quintain have cited aesthetic reasons for the replacement in the context of their overall Wembley scheme. Quintain would have been the recipient of the £18m.

To comply with the Council's Constitution on urgent decisions notice has been given to Matt Kelcher, Chair of Public Realm Scrutiny, that because of the urgency the usual 28 days notice cannot be given but 5 days will suffice:

Quintain need to continue with design development for Zone C works including the steps to be in a position to award a contract in September 2018 for the manufacture of the precast steps for installation in December 2019/January 2020. This being the only window available for the installation prior to Euro 2020. In light of recent news that Wembley Stadium is proposed to transfer from Football Association ownership to a private individual/company, Cabinet is being asked to re-examine the funding decision made in July 2017 to contribute funding for Olympic Way Improvements to enable the Council to advise Quintain accordingly. HERE