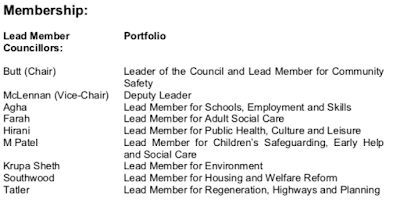 The Brent Cabinet is expanded to nine members in the new administration. Tom Miller loses his place with the Willesden Green election not taking place until June 21st. If elected he could enter the Cabinet at a later date with the Community Safety portfolio currently allocated to Butt. Cllr McLennan appears to have no portfolio at present but the important Finance responsibility is not yet covered despite Butt's statement at the AGM that 'terrible decisions' are yet to come.

Cllr Agha who served as Chair of Planning Committee in a period of many controversial decisions, when Cllr Marquis was on maternity leave,  joins the Cabinet as Lead Member for Schools, Employment and Skills. He is a fellow Welsh Harp councillor of Cllr Mashari who challenged Cllr Butt for the leadership. He was closely involved with pushing through the redevelopment of Chesterfield House, known locally as the Twin Towers development, and a host of the Quintain high rise developments around Wembley Stadium.

Cllr Farah moves to become Lead Member for Adult Social Care, a new post created by removing it from Cllr Hirani's brief which is now Public Health, Culture and Leisure.

With Cllr Agha leading on schools, Cllr Mili Patel is now Lead Member for Children's Safeguarding, Early Help and Social Care.  The separation of schools from children's social care is significant as the combination arose from concerns that the two aspects of child provision should be integrated for better efficiency as a result of institutional failures in preventing the deaths of children.

With Cllr Marquis' pre-election announcement that she did not want to stand for Chair of Planning Committee I understand that this most has now gone to Cllr Denselow.

The chairs of the three Scrutiny Committees, Cllrs Kelcher, Ketan Sheth and Long remain unchanged.
Posted by Martin Francis at 14:08:00