Has the £17.8m stadium steps question already been answered by the Brent Cabinet? 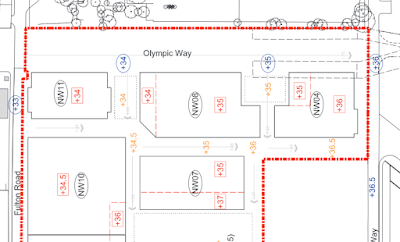 Brent Council today rather belatedly published the Officer's report for Cabinet LINK on the review of the decision to spend £17.8m of CIL money on Olympic Way improvements with the majority of the money going to replace the current Wembley Stadium pedway with steps.

The report recommends that Cabinet members:


2.1  Re-examine the funding decision for Olympic Way improvements in the light of the possible change in ownership of Wembley Stadium and confirm that funding from Quintain and the Stadium owners forms a three way funding stream for Zone C.
·      2.2  Confirm or otherwise the contribution of up to £12.1 million +VAT towards Zone   C improvements, such contribution being contingent on Quintain:

a.     Not pursuing development of site NW04 (see plan above) adjacent to the Civic Centre to the extent currently permitted in the parameters plans associated with outline planning permission 10/3032   LINK
b.     Working with the Council to deliver a development that better complements the role and setting of the Civic Centre, in particular creating a significant new square outside the Civic Centre Library
c.      Agreeing a business plan and agreement, between Quintain and the council, for the future sharing and reinvestment of the net income generated through assets on Olympic Way in Zones A, B and C.
d.     Securing up to one third funding contribution from Wembley Stadium owners.

The report reveals the existence of a 'Statement of Common Ground' with Quintain:

A “Statement of Common Ground” dating back to 2010 exists between the council and Quintain that allows for the application of CIL funds by LBB for the delivery of strategic infrastructure as identified in policy and the Infrastructure and Investment Framework (IIF). The above projects are within the IIF. The strategic CIL collected across the Borough, as a consequence of new development, is intended to be spent on infrastructure projects to support the ongoing development of the area, enhanced public realm falls within this, and it is proposed that a contribution from CIL to the costs of the works is appropriate.

I have requested a copy of this document. I did have access to the Section 106 agreement made between the council and Quintain but my latest search LINK returned a 'document unavailable' message. Perhaps it will reappear.

The report documents how far the work has gone so far including the reorientation of the NW04 building next to the Civic Centre which was sought by the council in exchange for funding the Olympic Way works:

Quintain have secured planning consent for Zone B works and have started  works in this Zone at their risk as a result of the July 2017 Cabinet decision;

Quintain and the Council have substantially agreed a draft Memorandum of Understanding for the mechanism for releasing the funding for Zones B and C and the principles of the Business Plan under which any net income sharing between Brent Council and Quintain will apply;

WNSL/FA and Quintain have undertaken considerable technical and modelling work to validate the operational efficiency and safety of the proposed steps replacing the pedway;
A planning application has been submitted for the reorientation of the NW04 building which will better complement the role and setting of the Civic Centre, and create a significant new square outside the Civic Centre Library;

A planning application have been submitted for the removal of the pedway and installation of the steps and all Zone C improvement work;

To date Quintain have spent in excess of £1m and are anticipating spending a further £1.5m to £2m (subject to Brent’s confirmation of the funding contribution and WSNL/FA or the new owners agreement to the removal of the pedway) on design fees alone related to Zone B and Zone C.

If officers seem to be representing Quintain in the above the following passage gives a further nudge in the direction of the Cabinet confirming the decision to fund the pedway from CIL funds:

As indicated in the Cabinet report of July 2017, the intention was to seek contribution from the Football Association towards Zone C works. Officers have been advised there has been a positive indication that the potential new owner may be willing to contribute towards Zone C works.  In the event Zone C improvements do not proceed, the pedway will remain in place, the new NW04 building orientation and public square is not likely to progress with the existing NW04 consent taken forward to implementation and the public realm from the foot of the pedway to the stadium will remain unchanged providing an even more uninspiring and disappointing “front door” for the stadium against the new public realm in Zones A and B.

Is it the council's task to provide an 'inspiring front door' to what will be a private stadium?

Remember that Press Release from Quintain that said they would pay for the 'Olympic Steps?' 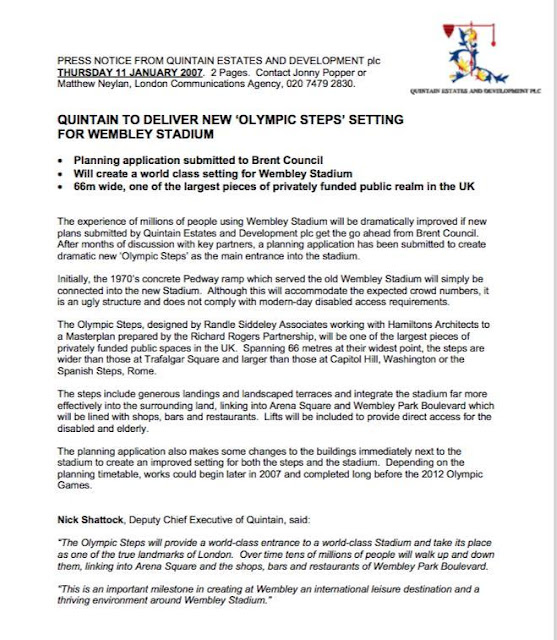 The Cabinet report does not mention that and certainly does not explore all the other possible uses that the £12.1m allocated to the pedway removal and replacement could be spent on to address our crumbling roads and pavements.

The Cabinet meeting is due to last just one hour on Monday and there are other items on the agenda: hardly enough time to carefully consider the issue. I suspect the decision has been made already...