Social cleansing? Somali women protest at being forced out of Brent 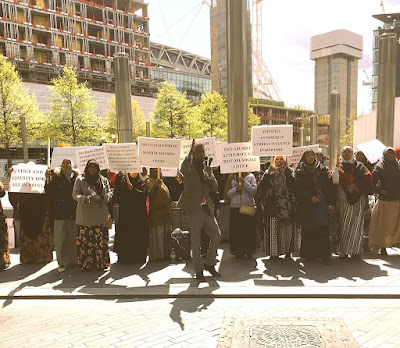 Against the background of the new blocks being built by Quintain, unaffordable for local families, Somali women protested outside Brent Civic Centre this week. Their message was clear: Somali families as a result of the housing crisis are being forced out of Brent by the Council disrupting family links and the education of their children.

@Selina_Bakkar tweeted Cllr Butt from the demonstration and asked him to come out and meet the women, saying 'Can you come out and speak to the women. They are fighting for their children not to be displaced':


Brent Council takes every household’s needs into consideration with every housing offer made. We give priority to homeless applicants with children taking GCSEs to be rehoused in Brent. But when this is not possible due to a lack of affordable accommodation, we offer homeless households the opportunity to move out of unsatisfactory b&b accommodation and into good quality, permanent accommodation within reasonable travelling distance to their priorities.

Selina responded with the evidence below of a family being moved to Hatfield: 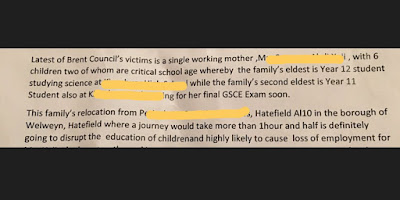 She claimed this was breaching the Council's statement regarding priority being given to GCSE students and said,  'This is causing the family distress at a crucial time especially for the young girls sitting exams. Has the regeneration accommodated for existing residence or is the solution to push them out?'

People from all backgrounds are being moved away from from their home areas,including my family. For these women to be only doing this for Somalis mean they don't care about everyone else. Priority is given to working parents, if their children are doing their GCSE's, the parents can get a job. To get together as a one country group to protest a thing that effects all races, is a form of racism. If they don't get priority, then they have to accept it like myself and my neighbours from all over the world. We all deserve to stay in the area too. Brent used to be all about integration, I'm 39, and that's all I've ever known. But I guess these women are better than us people from other backgrounds.

I agree that this is wider policy affecting people across the board but I think it is a great step forward that Somali women have self-organised to try and bring about change. I respect and support self-organisation of any group who from the strength thus created can move forward to make alliances with others for a common cause.

If it's the Somali group or any other group demonstrating against Brent's failure to build proper social housing and it's social cleansing policy, I know which side I'm on! Next time they want to organise, let's hope they are able to spread the message far and wide so even more people - including you - can join them.
The only racism I can see here is yours! If we don't stand together, we fall apart.

I am slightly confused about this because unless I am mistaken,
there is a large Somalian community in Brent and particularly so in South Kilburn and Wembley park.

Tony,
When you said ''The only racism I can see here is yours!''
I think that you were being unfair to Jam tube.
What you view as '' racism'' may actually be 'insecurity'' based on the uncertain times we are living in.