Less than two weeks after Brent Clean Air warned about the need for urgent action to protect children from air pollution in schools site next to busy roads LINK, Brent Planning Committee will be considering building a 630 pupil primary school and nursery on the car park of York House, next to busy (and likely to be busier as Wembley continues to expand through regeneration) Empire Way, close to Wembley Stadium Station.  Traffic is already far busier than the artist's impression above, and busier at school times than shown in my photograph.

However, the Officer's report for the Committee LINK  does not go into any detail about air pollution, referring instead to a far more general reference back in 2015 when outline planning permission was given and focusing on the impact of demolition and construction rather than children's daily exposure to pollution. 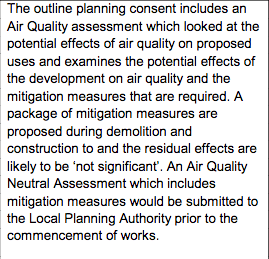 They suggest that the playground will be protected from air pollution by the school building, although a rooftop multi use games area (MUGA) is planned as well as a rooftop learning area.  The playground itself is very small for a 630 pupil school.

There is an acknowledgement that the area has heavy traffic as the report proposes that there should be reserved parking for parents at the red multi-storey car park near the LDO which would be a dropping off point for the children. Entry to York House itself will be via the LDO.

The school will be run by Ark as goverment policy does not allow local authorities to build new schools, and anyway Brent Council leader, Muhammed Butt,  who attended the February consultation meeting about the plans, is a great fan of Ark. and sits on the governing body of Ark Elvin which is round the corner from the proposed school. Others in Brent Labour Party are critics of the whole academies programme. Putting that aside there is no discussion on whether a school of that size is required as the recent pupil census showed spare places in Brent Primary schools LINK and there may be a further reduction as a consequence of Brexit.  Of course new flats are going up at a pace around Wembley stadium but they are not being designed, or marketed, as accommodation for families.

Quite a test for the scrutiny powers of the new Planning Committee.

As we all know on most days you cannot see the road surface of the number of cars, vans and lorries that drive in the area. It is highly irresponsible for the Labour administration to place a school here and for failing to insist that the developers of the flats in the area do not provide a safer and less polluted site within the development area.

Let's hope that at least one responsible member of the Planning Committee insists on evidence of air pollution in the area and stands up to protect the interests of the youngsters who will be forced to attend this school.

Well they say "Bullshit baffles Brains" and that certainly is the case as Quintain march on, and Brent Council sit on the fence and watch. As they now are looking for Clean Air Champions I defy any of them to sit on Empire Way on Wembley High Road and breathe, yes just breathe, cos I for one cannot. With the recent heat I can taste the pollution in the atmosphere, as someone who has suffered with COPD for life, until the last 5 years I never needed to carry my inhaler now I don't leave home with out it. I am mature, my lungs are already damaged but what about these young children, kids in pushchairs, toddlers, there is no choice for them they have to go where mum is taking them, to school on a busy main road, full of Carbon monoxide er no thanks. As Martin has previously stated we do not need another primary school there are plenty of places in current schools, after Brexit there will be loads more. Abort the decision now.

Bumper to Bumper day in day out on this road, you have to be kidding me. Who dreamt this one up? It completely goes against all the new Clean Air Champions Brent are banging on about.

Will protective gas masks and respiratory aids be specified as part of the school uniform as outdoor wear? I personally would not advise anyone I knew to send their child to this school, especially when there is another Ark school already at Wembley Park.