Fury over trees 'hacked down' in South Way, Wembley 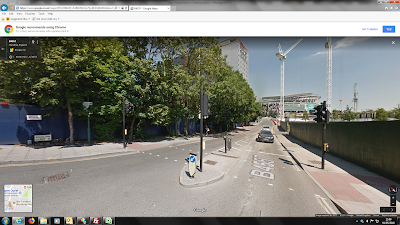 I have received a message from a local resident about the destruction of trees on South Way, Wembley. The heartfelt email speaks for itself so I have published it below:

Following on from your piece about the concrete jungle Brent Council are creating LINK  we went to Wembley Stadium last week and these huge beautiful trees in South Way (see screen grab above) along the side of Mahatma Gandhi house development site were still there - last night we walked past and they had all been hacked down, I was so shocked and infuriated, I simply could not believe what I was seeing!!!

First question is - why were they hacked down?  They appear to be on the pavement as they are in line with the road sign?  Several other beautiful trees which were within the blue hoardings were cut down late last year/earlier this year - the developers managed to demolish the whole of Mahatma Ghandi house without cutting down these trees outside the blue hoardings so why have they cut them down now?

Second question is  - isn't this illegal during nesting season?

Third question is  - when are Brent Council going to stop the total obliteration of anything green in Brent?

They have this on Brent Council website asking for Community Air Quality Champions LINK and then the let the developers oversee the removal of these beautiful trees during the nesting season.

The destruction of these valuable trees comes on top of all the trees they allowed developers to hack down on Olympic Way and at the Brent House development site too - also 4 trees on the traffic island which were removed by the road was dug up for the sewer works.

I have been trying to get Brent to confirm how many trees they have cut down in our Wembley Central and Alperton wards in the past 2 years - I have a list of 134 trees but they sent me a list of just 23 trees which is totally inaccurate - they have no idea what they are doing or what their contractors and the developers are doing.

Please raise this issue re the loss of more trees.

'When are Brent Council going to stop the total obliteration of anything green in Brent?'

I don't know. But I suspect the leader of Brent Council would like to obliterate the Green Party in Brent, and especially its candidate in Tokyngton Ward.