Justice Now: Make it right for Palestine - March and Rally on Saturday 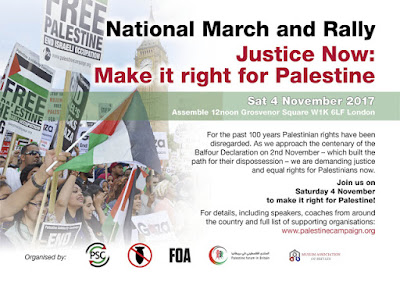 Members of Brent and Harrow Palestine Solidarity Campaign, Brent Stop the War and other local activists will be taking part in this march on Saturday marking the 100th anniversary of the Balfour Declaration on November 2nd which built the path for the dispossession of Palestinian rights.

Speakers at the rally will include"

The march is scheduled to set off at around 1:00pm from Grosvenor Square along the following route:
Posted by Martin Francis at 15:03:00