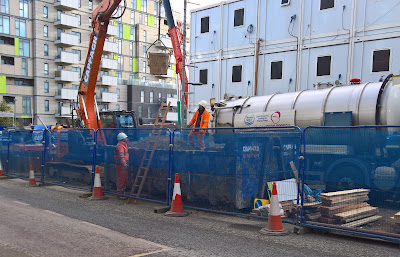 Brent Council have confirmed that the Thames Water sewer works on Wembley High Road will be extended up to December 22nd. Certainly the works, which were due to be finished at the end of this week, look nowhere near completion. I understand that the concrete blockage extends further eastwards than first thought and clearing it will require further excavation.

The final bill for the works and compensation could run into hundreds of thousands and despite their denials, Henley Homes, who are developing the  Brent House site adjacent to the sewer works, are still being suggested by locals as the most likely blockage culprit. Watch this space!
Posted by Martin Francis at 17:06:00