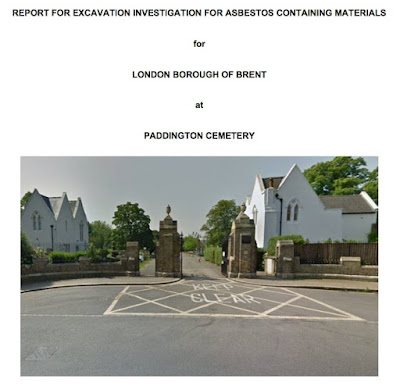 In a hand-delivered letter Veolia has written to employees advising them of their possible exposure to asbestos contamination at 'the mound' at Paddington Cemetery. Burials on the mound were suspended in May this year and a survery commisioned.

The survey LINK confirmed contamination and Veolia advise employees who worked on the mound over the last year to register potential exposure with their GP. They point out that doctors will not be able to do tests at this stage as it takes many years for asbestos related symptoms to manifest themselves.

Veolia have told Brent Council that they will not be carriyng out any further burials at the mound and the only works will be 'topping out' of sunken graves as this does not require the breaking of ground. Veolia says that Brent Council has committed to having the mound capped with a special membrane installed over the current surface.

Reacting to the news Cllr John Duffy (Labour, Kilburn) has written to Carolyn Downs, Brent Council CEO to call for an independent investigation into the contamination rather than referral to the Internal Audit Team.

He says the contamination puts the former Brent Council workforce, as well as Veolia's after out-sourcing, at risk. He claims that relatives of those buried on the mound have complained that they are not being kept informed by the council.

Duffy points out that waste contianing over 0.01% asbestos should be treated in a proper facility and that any dumping in the cemetery should be tracable via a waste transport consignment note.

He estimates that treatment of the mound will run into tens of thousands and the total loss to the council including reopening existing graves to inter relatives could total one million.

He calls for ther council to be open and transparent by engaging an independent investigator rather than an internal investigation.
Posted by Martin Francis at 11:57:00