Dollis Hill residents and steam train enthusiasts were up early this morning to see the Flying Scotsman steam locomotive from the railway bridge at Gladstone Park.

Since this post was first published local historian Philip Grant (see his comment below) has supplied this photograph of the Flying Scotsman on display at the British Empire Exhibition in Wembley in 1924. 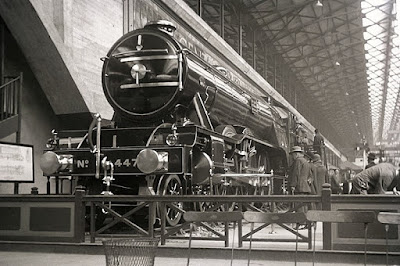 Thank you to Zeina for sharing this video, and to Martin for displaying it on "Wembley Matters". Did you know that there was a Wembley connection with this world famous locomotive?

After Britain's numerous private railway companies were rationalised in 1923, the new London & North Eastern Railway company decided to name its 10am fast train services between London and Edinburgh "The Flying Scotsman".

To publicise the launch of this service in 1924, it gave one of its new high-speed steam locomotives the same name. It used this locomotive as the centrepiece for the LNER display in the Palace of Engineering, at the British Empire Exhibition held at Wembley Park in 1924.

Around 17 million visitors came to Wembley for the Exhibition that year, and "The Flying Scotsman" has been one of the world's most popular steam locomotives ever since!

Philip (with my Wembley History Society hat on).