Brent school students, teachers and governors turn out for rally and lobby 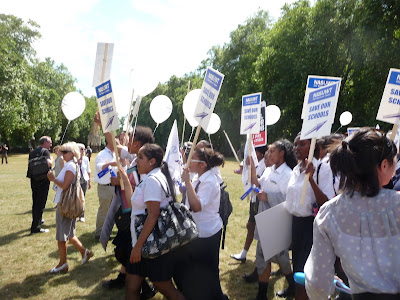 School students, teachers, governors and parents were out in force yesterday for the rally and parliamentary lobby over the cuts in the Building Schools for the Future programme and the Academies Bill.

School students from Copland, Alperton and Queens Park Community School were among those attending the rally and who met with Brent MPs to press the case for their schools. Barry Gardiner, MP for Brent North, said that he was going to concentrate on the BSF issue but said that he would also sign the EDM on academies consultation. 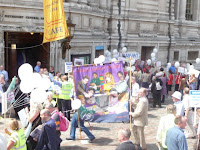 Meanwhile the Guardian has published a LIST of those schools who have applied for academy status. In Brent only two schools, both religious schools, are listed: The JFS (Jewish Free School) and the Convent of Jesus and Mary. Claremont, whose head expressed an interest some weeks ago was not included after the governors decided to take time to research the issue.

The Methodist Central Hall, where the rally was held, was packed and an overflow room had to be opened. The mood was militant and it was good to see school students out in force to fight the cuts.
Posted by Martin Francis at 11:22:00