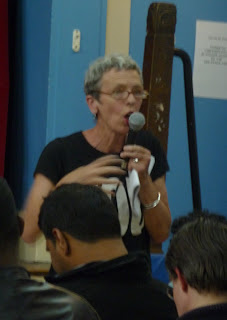 Last night's meeting about the closure of Kilburn College was crowded, angry and militant. Lecturers, students and local residents came together to denouce the closure plans and put forward ideas for active resistance. The main political party candidates for Hampstead and Kilburn spoke platitudes from the platform and soon disappeared.

Speaking from the floor, Peter Murry, an ex-lecturer at Kilburn and a council candidate for  the Brent Kilburn ward spoke passionately of this attack on local people who face challenges such as learning English and getting into employment. He outlined how further education could transform their lives and said that the removal of their access to education was a crime. He supported calls for non-violent direct action and remarked that such tactics were a proud Green Party tradition. He called for further education colleges to be brought back under local authority control.

Bea Campbell, Green Party parliamentary candidate for Hampstead and Kilburn, spoke about how further education had improved her parents' life chances and suggested that another dimension to the campaign should be a legal route.  She urged the campaign to seek legal assistance to use the recent Equalities legislation to show that the community had not been properly consulted on the proposals, (now a statutory requirement).

Students from the ethnic minority communites spoke movingly of their attachment to their local college and the difference it had made and was making in their lives. There were accounts of the shock they had felt when the announcement was made and their feelings of being completed disregarded by the college governors.

A large number of people, including Green Party members, volunteered to be part of a delegation to the college governors, to try and persuade then to reverse their decision.
Posted by Martin Francis at 11:25:00