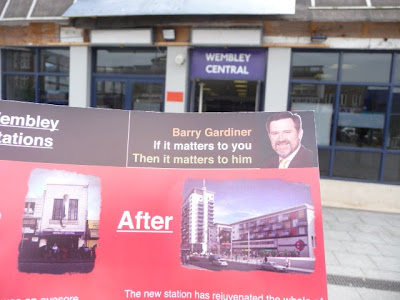 Barry Gardiner was busy leafleting Wembley PARK station this morning with a leaflet praising the new station at Wembley CENTRAL, which was all down to him apparently.

He claims, 'The new station has rejuvenated the whole of Wembley High Road. New homes - new shops - new jobs. All thanks to the New Station' (and Barry of course).

The problem is that there is no new station at Wembely Central - all that has happened is the old frontage has been demolished and the booking office remains in a sort of allotment shed. Regular users of the staion will know about flooded floors, destination indicators that don't work, and the occasional platform entertainment from rats - not to mention lifts that are still to be installed. There is still no platform level connection between the Bakerloo/Overground platforms and the Southern service from East Croydon to Milton Keynes.

This does make you wonder how well Barry knows his local area.  Passengers receiving the leaflets seem to have made up their minds pretty quickly about what they thought of it - dumping the leaflet when they picked up their copy of Metro. 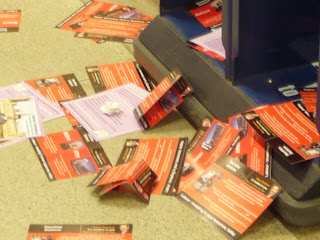