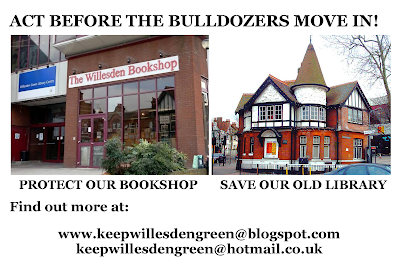 More than 30 people volunteered for Save Willesden Green's committee last night and quickly got down to the work of organising different aspects of the campaign. They aim to stop the development to give time for local people to have a say in the proposals, and time for the Council to reconsider their plans.

Only 12 people were involved in initial consultations and there are only 30 spaces available in Galliford Try's two consultations days on February 28th and 29th.

Anger is building at what residents see as a private 'done deal' between the Council and developers and committee volunteers included a broad range of local people including shop keepers, parents, teachers and residents.

Petitions to save the old Victorian Willesden Library from demolition and to relocate the Willesden Bookshop in the proposed Cultural Centre each look likely to gains more than 1,000 signatures. A leaflet has been produced outlining the issues and is being distributed widely, aided by more than £350 which was collected in a whip round last night.

The vast majority of people taking part have not been involved politically before but have been galvanised by what they see as their exclusion from major decisions about their neighbourhood.
Posted by Martin Francis at 12:26:00