Brent Planning Committee on Wednesday December 12th will decide whether to approve an application for the site of the 'Good Ship' pub in Kilburn High Road. In June an application was turned down because it did not conform with the Council's pub protection policy (DMP21) and concern over the quality of accommodation that was to be provided. LINK

The application will be heard in the context of concern that Kilburn High Road is losing its live music venues and local residents will want to ensure that the pub that is now included will be financially viable and attract a tenants who will continue to put on events.

Camden Council objected to the frontage design but unfortunately their comments and those of local Brent councillors are not now available on the Planning Portal: 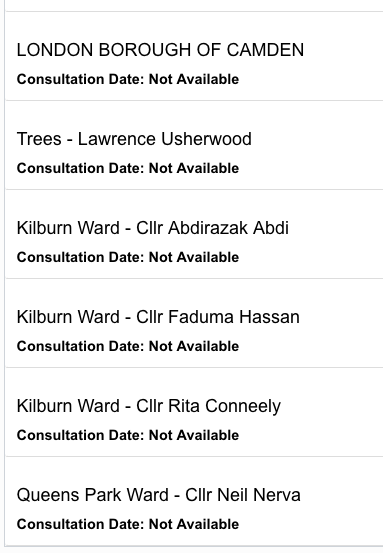 The officer's report LINK contains a detailed section on the proposed pub space. Note the reference to the fact that it is proposed that this provision is classified as A4 rather than D2 which would be appropriate for a venue that had  entertainment as its primary purpose:

In this submission the A4 unit is proposed to be retained, although it would have a different layout to the existing unit and be split level, occupying both the proposed basement and ground floor levels. Whilst the proposed development would no longer result in a loss, it is nevertheless important to give consideration to the principles behind DMP21. Whilst the A4 unit is being re-provided, the layout is changing and therefore attention needs to be given to the quality of the unit and its ability to operate in the long-term as a viable A4 use, even if the re-development is not resulting in a loss in itself. Therefore whilst criteria a) of DMP21 is no longer relevant to the proposal, the other criteria are to be considered in turn.


Criteria c) of DMP21 states that the proposal should not constitute the loss of a service of particular value to the community. There is no evidence to suggest that the premises were and are used to host local community events such as residents or local interest group meetings. However, a significant number of objectors have referred to the value that the premises provided in terms of the local night time economy, space for bands to play in, creative space and as one of the only places in the Kilburn area to provide live music and entertainment. The premises and its former function with Kilburn is therefore clearly valued to certain sections of the local community. It is therefore important that an acceptable A4 unit is retained. It would then be down to the operator to decide whether to continue to hold music events.


The layout of the unit is proposed to change and concern has been expressed the A4 unit would not offer good quality and usable floorspace so to appeal to a wide variety of tenants or to be used in future as a live entertainment venue similar to ‘The Good Ship’ .The existing unit occupies the ground floor with a sunken area to the rear and mezzanine level, with a floor area of 138m2 at ground floor with the mezzanine providing a further 22sqm of floorspace. Due to the creation of the basement, the proposed new unit would have a total floor area of 332m2, however it is acknowledged that greater floorspace does not necessarily equate to greater quality and part of the basement cannot be considered usable given that it would have to accommodate additional storage and toilets. Nevertheless, the basement would still increase floorspace and would be an open area contributing to the quality of the unit with the potential to operate in various ways associated with an A4 use.


In order to properly assess the quality of the space, a comparison of the usable areas of the proposed and existing ground floor, which is considered the most significant, has been undertaken. In relation to the existing unit, the main bar area measures some 6.5m wide x 11.3m long with the lower level measuring 6.6m x 4.6m. There is a circulation area adjacent the sunken floor level measuring 2.1m wide leading to the back of house area. It is raised that this area would typically not be considered practical usable space, nevertheless it has been counted as such in this assessment in that it would probably be a suitable standing area for people. In relation to the proposed unit, the main front area would measure 6.8m wide x 11.3m long (slightly wider than existing), with the opening through to the rear area measuring 4.7m (less than the existing 5.5m). At the rear the area measures between 6m / 5.1m wide x 10.5m long which equates to a total ground floor area of 146m2. Therefore whilst noting that the layout would differ from the existing, with no mezzanine proposed, the area of useable floorspace at the ground floor and the proposed layout of the unit would not be very different ( a loss of approx 14sqm at ground floor) from the existing so to conclude that the unit could not be used in a similar fashion to ‘The Good Ship’ or as a viable A4 unit in the future. The ground floor would also be double height throughout which would further ensure the quality of the space. Again, floorspace would be maximised through the provision of the basement


Objections have been received from local residents noting that Kilburn High Road has been identified as an important location for the night time economy and that the subject site makes an important contribution largely due to the fact that it is the only remaining live music venue on Kilburn High Road. The extent to which the reconfigured A4 unit would be viable as a future entertainment venue has already been discussed above, however, it is important to note that an entertainment venue would fall under use Class D2. Planning history indicates that the subject site was in A4 use long before it became the Good Ship (previously occupied by ZD bar) and there is no evidence of a planning application ever being submitted for the change of use to D2. Furthermore, if the opening hours of ‘ the Good Ship’ are considered these would support its primary use as an A4 unit given that the premises were open Monday to Sunday with long openings hours (17:00 – 02:00 and until 04:00 Fridays and Saturdays ). Therefore whilst the previous occupiers may have found their niche in terms of providing live entertainment to ensure their longer term viability, this does not appear to be the primary purpose of the unit and as such it is correct to assess the unit as an A4 use. Nevertheless, and as above, it is important to ensure that a similar venue could operate from the premises and it’s considered that this would be possible.


Whilst no longer a loss of the A4 use it is acknowledged that criteria b) of DMP21 states that the proposed alternative use should not detrimental affect the character and vitality of an area and should retain as much of the building’s external fabric and appearance as a pub as possible. In this case, although the building would be replaced, the existing building and in particular its frontage is not considered typical of the frontage of a traditional public house. The frontage does not have features typically associated with a public house that can be seen in other premises on Kilburn High Road and therefore the proposal is acceptable in relation to criteria b). Criteria d) is not applicable in this case as the premises are not registered as an Asset of Community Value.


Therefore when considering the quality, it is considered that the re-configured unit would have an acceptable layout so as to appeal to a wide variety of tenants and would have the potential to operate as a live entertainment venue if such a tenant wished to occupy the unit in future. Furthermore, given that the unit  would be of a suitable quality, it would not jeopardise or undermine the Kilburn High Roads designation within the draft London Plan as an important location for the night time economy. It is therefore considered that the previous reasons for refusal have been overcome and the principle of the re-development of the site is acceptable in this regard. A condition has been recommended to agree the fit-out details of the A4 unit, to ensure that it is constructed to a standard that will attract future occupiers and be viable.