Welcome back to our journey through Wembley Park’s history. If you missed Part 2, “click” on the “link”.

After the failure of the Wembley Tower, the company was renamed the Wembley Park Estate Company in 1906. Its owner, the Metropolitan Railway, had electrified its lines the previous year, and was keen to develop spare land near its stations for housing. New roads to the west of the pleasure grounds had already been laid out in the 1890s, including Wembley Park Drive. This ran from the thatched lodge (built 100 years earlier, at the start of Repton’s gravel drive to the Wembley Park mansion) to the station. 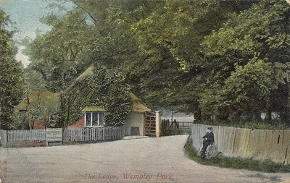 1. The Lodge at the start of Wembley Park Drive, with sign to station, c.1900. (Brent Archives image 7742)
From 1907, the estate company began selling off plots of land to builders, clearing away many of the trees and the existing buildings. The “White House” had been used by a group of Catholic nuns from France since 1905, when they were expelled from their convent under a new French law separating Church and State. They had to leave, so that John Gray’s mansion could be demolished in 1908, to make way for Manor Drive.

In the former pleasure park, the Variety Hall had been leased by the Walturdaw Company in 1907, for use as a film studio. Early cinema film was highly flammable, and the wooden building burnt down in 1911! From 1909, the grounds were used for training camps by Territorial Army forces. Then, in 1912, much of the site became the 18-hole Wembley Park Golf Club. 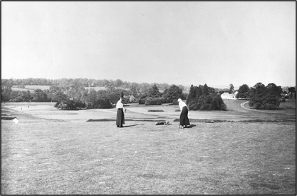 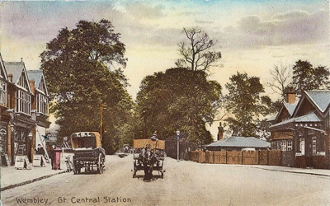 The Wembley Park Estate got off to a slow start, with some houses being built in Oakington Avenue and Wembley Park Drive by 1910. After a passenger station opened on the Great Central Railway in 1906, there were also plans for a large garden suburb at Wembley Hill, just south of Wembley Park and its golf course, as shown in the advertisement below. 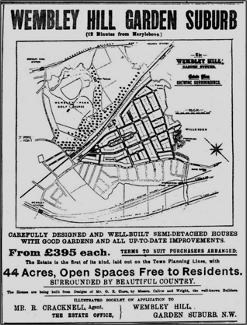 4. Advertisement for Wembley Hill Garden Suburb, in 1914. (Brent Archives – Wembley History Soc. Colln.)
Wembley Urban District Council also had ideas for the former pleasure grounds, and set up a committee to prepare plans for a high-class garden suburb there as well. They had tried to buy part of the site as a public park, but could not agree a price with the estate company. Instead, they bought two fields from a farm in Blind Lane, and in July 1914 Queen Alexandra opened the park, named after her late husband, King Edward VII. The new park was beside the recently opened Blind Lane Council School, which like the road was renamed, Park Lane.

When war broke out, that same summer, all house building work came to a halt. By 1920, housing development in the area was proceeding again at pace, and not just on the former Wembley Park land. The Read family had been farmers in Wembley for centuries, including as tenants of the Pages. In 1922, the remainder of the farm they rented (part of which they had lost for the park) was sold off. John Read, who was born at Elm Tree Farm (near the junction with Wembley Hill Road) fifty years earlier, emigrated with his family to Australia. 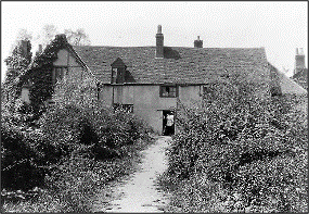 One reason for the rapid increase in house building was the efforts of the Metropolitan Railway to promote districts along its line as “Metro-land”, healthy suburbs that gave easy access “to town”. Another reason was the efforts of Wembley building firms such as Comben & Wakeling. The accessibility of Wembley Park to the centre of the capital, and the large size of the former pleasure grounds, was also a key factor in its choice, in 1921, as the site for a huge exhibition. 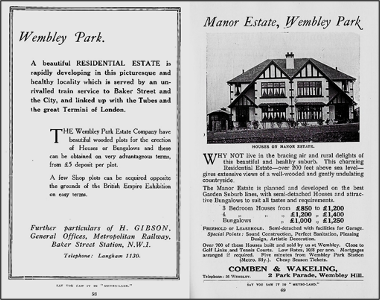 6. Wembley Park housing adverts, from the 1922 edition of "Metro-land". (Brent Archives – W.H.S. Colln.)
Ideas for a British Empire Exhibition had come together the previous year, with the promise of Government support. As well as promoting trade, its aim was ‘to enable all who owe allegiance to the British flag to meet on common ground and learn to know each other.’ The Prince of Wales (later King Edward VIII), who was President of the organising committee, was keen that the exhibition should include ‘a great national sports ground’, and work began on this in 1922.

The Empire Stadium was completed in time for the F.A. Cup Final in April 1923, but the rest of the exhibition area was still a building site. Work had been delayed, because sections of the golf course fairways had been fenced off, to provide the first turf for the football pitch. It was thought that the stadium’s 125,000 capacity would be enough, as it was twice the size of the Stamford Bridge ground where recent finals had been played, but around 200.000 fans came to Wembley for the match. The few local pubs nearby did a roaring trade! 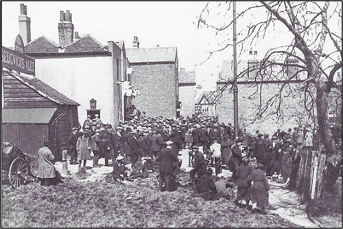 Over the next year around 15,000 men, 70% previously unemployed ex-servicemen, laboured to construct the numerous exhibition buildings, and to landscape the 216-acre site. Just as it had been for the stadium, reinforced concrete was the main material used, with thousands of tons of ballast transported down the Metropolitan Railway from a huge gravel pit near Rickmansworth. Most of the buildings were ready when the exhibition opened on 23 April 1924.

8. Panoramic view of the exhibition site, from the cover of a BEE booklet. (Brent Archives – W.H.S. Colln.)

The British Empire Exhibition that King George V opened had pavilions representing almost every nation within it, from across the world. Many were designed in the style of buildings from those countries, and housed men and women displaying their crafts and selling their products, as well as performers giving a taste of a wide variety of cultures. The 1924 F.A. Cup Final was an all-ticket event, after the chaos of 1923, and fans could enjoy the newly-opened exhibition. 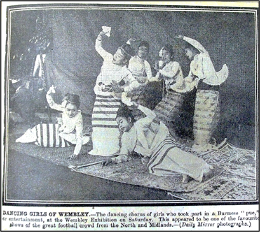 North of the artificial lake, that crossed the site from east to west, there were large “Palaces” displaying Britain’s Art, Industry and Engineering. Next to these was a huge amusement park, which as well as thrill rides had full size replicas of a coal mine, and of the recently discovered tomb of the Egyptian pharaoh, Tutankhamen. Many maps were produced to help visitors find their way around the attractions. Today, if you wanted to visit where Huntley & Palmer’s biscuits had been made, you would have to wait until Wembley Library reopens, after the “lockdown”. 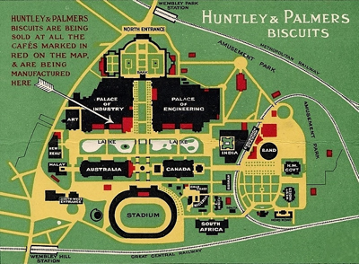 Although the map above shows the main railway lines, it gave no information about the other innovations being tried out to transport visitors around the large exhibition site. The Neverstop Railway ran for two miles from the North Entrance. It was driven by a continuous corkscrew underneath the carriages, with the threads distanced so that it moved slowly through the five stations, allowing travellers to get on and off easily, but speeded up to over 20mph in between. Two million people used it, paying a flat fare of six (old) pence, with half price for children. A different system, the Road-Rail train, across the south of the site, was not a success.

You might be surprised to learn that there were also 200 electric buses. The “Railodok” cars had a driver, who took up to twelve passengers on a 20-minute tour round the exhibition. This proved very popular after the King and Queen had enjoyed the experience, driving quietly but safely through the crowds. These buses had a specially built garage, where their batteries would be re-charged – an idea that, nearly 100 years ago, was ahead of its time. 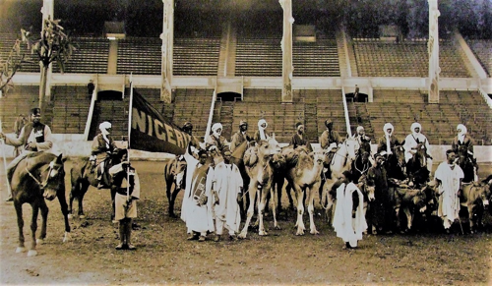 Throughout the exhibition, the stadium was the venue for large scale shows. In July and August, it was the Pageant of Empire, which used thousands of local volunteers, in period costumes, to re-enact events from history. It was staged in three sections during the week, with all three being performed on Saturdays. Those who had come to Wembley from across the Empire joined a finale parade, and the photo above shows the Nigerians rehearsing their part. The animals for the Pageant were kept at Oakington Manor (Sherren’s) Farm. Wembley’s entire police force were called out one night, to round up 50 donkeys which had escaped!

Around 17 million visitors came to Wembley Park for the exhibition in 1924, and a further 10 million when it re-opened for the 1925 season. If you would like to find out more, there is a British Empire Exhibition section in the Brent Archives online local history documents. New Zealand, Nigeria, Sierra Leone and the West Indies are among the exhibitors you will find information on, as well as learning about Belo Akure, a First World War hero at Wembley. You can also see how Canada and Australia made use of refrigeration in their displays. 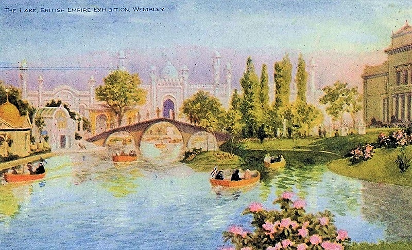 12. The exhibition's lake, with the Indian Pavilion in the distance. (Brent Archives online image 7326)

When the exhibition finally closed, on 31 October 1925, there was no plan in place for its legacy. The company set up to run it had made a loss, and a liquidator was appointed to sell off the buildings and other assets. Some of the pavilions were dismantled, and taken elsewhere to be re-purposed as factories, a restaurant and a dance hall. Attractions from the amusement park were sold to Blackpool and Southend, or just for scrap metal. Did Wembley Park have a future? Yes, it did – please join me next weekend to find out more!