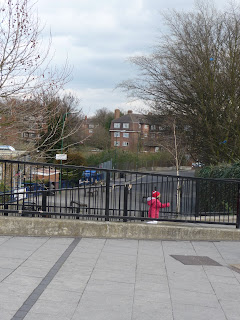 Consideration of the Wembley Masterplan by the Brent Executive, due to be table at its meeting on Monday April 6th, has been put off following intervention by the Conservative Group.

The Masterplan has been been heavily criticised by the Wembley Community Association, Brent Green Party and Quintain Estates on the basis that it is unaffordable and undeliverable.

The reconnection of North End Road to Bridge Road at an estimated cost of £20mln (the cost of two new primary schools) which has been a particular bone of contention in the Plan has been thrown into doubt. At present the closed off road provides a low traffic haven which is safe for children from the nearby flats. The Masterplan envisaged the demolition of the present pedestrian footway linking Bridge Road and Olympic Way which provides access to North End Road. (see photograph) However the Planning Inspectorate last week over-ruled Brent Council and approved the building of a 20 storey student accommodation tower on a nearby site, raising issues about the practicality of the Masterplan proposals.

Click here for the WCA's Submission on the Masterplan

Click here for Brent Green Party's Submission on the Masterplan

Meanwhile ARK Academy campaigners have raised concerns about missing essential documentation on the council planning site ahead of the re-scheduled planning hearing on Tuesday April 28th. They argue that they are unable to make an informed submission if essential documents are unavailable for detailed perusal.
Posted by Martin Francis at 09:59:00